NFL News and Rumors
Does your favorite NFL team need a decent quarterback? If your team already has a good (or great) quarterback, who’s his backup? If you can’t remember his name and you just looked it up, do you think your team could use an upgrade this football betting season?Plenty of teams are still looking for one signal-caller who can take the offense up and down the field (hello, Buffalo and Houston, among others). Many others don’t really have much in the way of a viable option if their first quarterback goes down (yes, Dallas, that’s you. The New York Giants, Kansas City Chiefs, New Orleans Saints and the Seattle Seahawks are just four of a bunch of teams that come to mind).So why is Michael Vick still unemployed? He was the starting quarterback for the Philadelphia Eagles in 2013, but apparently he’s the only mobile quarterback in the league in whom Chip Kelly is not interested. He didn’t catch fire during his time with the New York Jets in 2014, but surely this player who was once an All-Pro could help some team, somewhere.

It only makes sense that some NFL team will pick Vick up as training camp gets closer. If they’re not wanting to use this 35-year-old as their starter, then someone will want him on the bench just in case their starting quarterback goes down. The best situation for Vick is probably a place where there’s no question as to who the starting quarterback will be, because there’s no reason to divide a locker room over the limited upside that Vick would bring as the full-time starter. However, there are some places where Vick could be useful as a veteran backup.Arizona Cardinals – Did you notice that this team played a good number of games with its #3 quarterback at the helm? Did you notice that this team started the season 9-1 and then limped into the playoffs at 11-5? Those last two wins were by a score of 12-6 in St. Louis and 17-14 in Kansas City. Overall, in those two wins they had one touchdown (with a two-point conversion) and seven field goals. Luckily, the Cardinal defense was so stout that they were able to earn those wins and go into the postseason, where they would travel to Carolina and lose 17-6 (two more field goals). Seriously, any veteran quarterback with a decent arm should get a look as a backup quarterback behind Carson Palmer as the 2015 season nears. 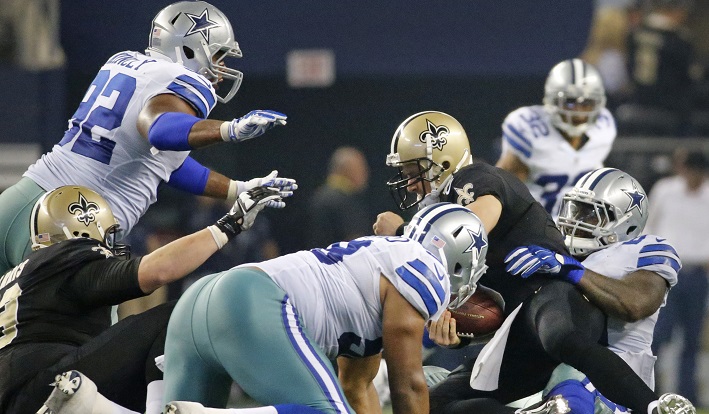 Dallas Cowboys – Luckily for Dallas, Tony Romo only missed one full game after going down with fraactures to the transverse process in his back against the Washington Redskins. Who was his backup? Brandon Weeden. Weeden did well enough against the lowly Redskins to lead a touchdown drive and take the game to overtime, when Romo decided he had seen enough and put himself back in the game, but his back was bothering him so much that he couldn’t throw with much accuracy, and the Redskins took the game in overtime. The next week, the Arizona defense stifled Dallas, as Weeden looked like he could barely complete a pass. The Cowboys definitely need an upgrade at their backup position.Green Back Packers – Aaron Rodgers‘ backup is Scott Tolzien. The Packers have long liked Tolzien, but he hasn’t done much on the field to show his value to the team. Rodgers has been one of the league’s most dependable quarterbacks in terms of health, but it only takes one hit to knock a quarterback out of the game. Vick could add some vital insurance on the bench to give the Packers a little more stability as they gear up for what they hope will be another deep playoff run.Sources:Wikipedia.org (https://en.wikipedia.org/wiki/Michael_Vick)NFL.com (http://www.nfl.com/player/aaronrodgers/2506363/profile)
Older post
Newer post