NFL News and Rumors
Okay NFL betting aficionados, if simply looking to get through the dog days of summer that make up a major part of the annual NFL offseason period and you want a bit of NFL information to help whet your appetite, then you’re in for a treat!By going back in time once again to compare the careers of two Hall of Fame quarterbacks, (I’m really telling my age now) you’re going to get the dose of NFL fun you need whilst I once again, subject myself to the age­related taunts of younger NFL enthusiasts everywhere.Having said that, here is a look at the careers of Hall of Fame quarterbacks, Fran Tarkenton and Warren Moon, followed by my selection on which player I believe was the ‘better’ quarterback.

Prior to the 1978 NFL Draft, some NFL scouts suggested that since University of Washington quarterback Warren Moon had played in a rollout system rather than a drop­back passing offense, he would be a mid­round pick. Many others speculated that since only one African­American quarterback, James Harris, had achieved any measurable success in the NFL, Moon would have to play some other position.Regardless of which misguided reason motivated NFL scouts, Moon remained confident of his abilities and opted to sign with the Edmonton Eskimos of the Canadian Football League. He went on to lead the Eskimos to an unprecedented five consecutive Grey Cup victories.Eventually, Moon returned to the United States to play for the Houston Oilers in 1984 and would go on to rack up nearly 50,000 passing yards in 17 NFL seasons. Moon set a new franchise record with 3,338 yards passing in his first year with the Houston, a mark he would break four more times. In 1986, when the Oilers installed the run­and­shoot offense, Moon’s quarterback skills became even more apparent to all. The wide­open offense showcased Moon’s strong arm, running skills, and big­play ability.In 1990, Moon led the league with 4,689 passing yards and also led the league in attempts (584), completions (362), and touchdowns (33), and tied Dan Marino’s record with nine 300­yard games in one season. The following year, he again led the league in passing yards with 4,690. At the same time, he joined Hall of Fame quarterbacks Dan Marino and Dan Fouts as the only quarterbacks to post back­to­back 4,000­yard seasons. Moon also established new NFL records that season with 655 attempts and 404 completions.Moon was traded to the Minnesota Vikings before the start of the 1994 season. In his debut season he passed for 4,264 yards and led the team to the playoffs. In his second season in Minnesota, he again passed for more than 4,200 yards. Moon moved on to the Seattle Seahawks as a free agent in1997 where the veteran superstar set franchise records for completions (313) and passing yards (3,678) while earning his ninth Pro Bowl selection. Injuries limited his play in 1998 and in 1999, Moon joined the Kansas City Chiefs where he would spent two seasons as a backup before retiring.Despite spending his first six professional seasons in the CFL, Moon ranked third all­time in NFL passing yardage and fourth in touchdown passes thrown at the time of his retirement. 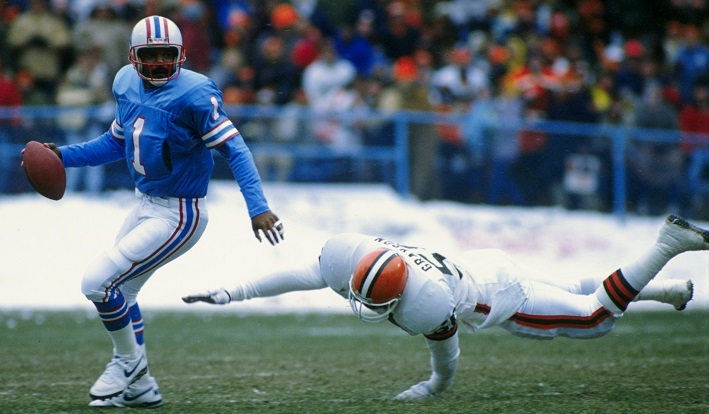 Fran Tarkenton’s career as a National Football League quarterback started with the then fledgling Minnesota Vikings in 1961. Tarkenton would then move on to the New York Giants in 1967 and then back to the Vikings in 1972.In Minnesota’s first game ever, the rookie from Georgia came off the bench to fire four touchdown passes and run for a fifth in a hue upset of the Chicago Bears. For the next 18 seasons, the 6­0, 190­pound signal­caller never let up in his relentless quest for yardage and touchdowns.At the time of his retirement, Tarkenton owned every significant passing record – 3,686 pass completions, 47,003 passing yards, and 342 touchdowns. But particularly in his early years, Tarkenton attracted widespread attention as an exciting scrambler who took plays from sideline to sideline.Add his 3,674 rushing yards to his stunning passing totals and you have 50,677 total yards – or almost 29 miles and 500 football fields – of offensive domination. Yet Tarkenton was also a “quality” passer as his 80.4 passing rating that placed him in the upper echelon in that category demonstrates.Tarkenton was the third overall draft pick of the 1961 NFL Draft and became the starting quarterback for Minnesota early in his rookie season before continuing his outstanding performances for the next six seasons. However, in 1967, Tarkenton was sent to the New York Giants in a trade that netted the Vikings two No. 1 and two No. 2 draft picks over a three year period.Five seasons later, Tarkenton came back to Minnesota in another massive swap that cost the Vikings two veterans, a rookie and two high draft picks. In his final seven years with the Vikings (1972­1978), he led Minnesota to six NFC Central Division titles and three Super Bowl appearances. He was named first or second­team All­NFL three times and selected to play in nine Pro Bowls during his career. 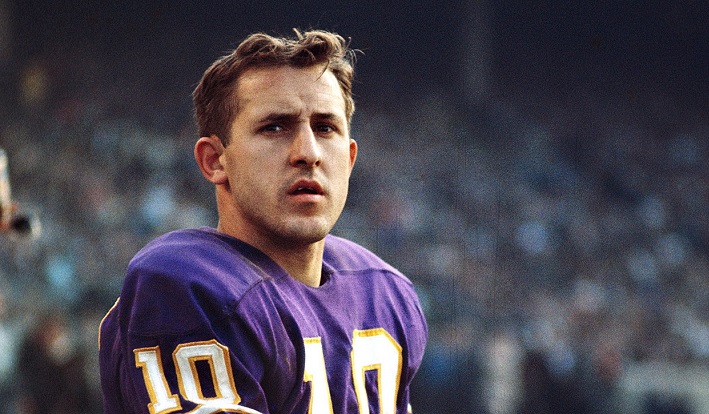 My Pick: I know both quarterbacks passed for tons of yardage in their respective careers, but for me, I believe Fran Tarkenton was a much better on­field and locker room leader with more pertinent intangibles than Moon. I know neither quarterback won a Super Bowl title in their careers, but Tarkenton did lead his team to four championship games mainly on the heels of his incredible moxie and unrivaled ability to extend plays with his legs.In closing, although I really enjoyed watching Warren Moon play, I can not rank him ahead of Fran Tarkenton, a player I loved watching as a child in the early and mid 1970s. I guess it would seem that Fran is still the man.Sources:http://www.nfl.com/player/warrenmoon/2502177/profilehttps://en.wikipedia.org/wiki/Fran_Tarkenton
Older post
Newer post