NFL News and Rumors
If ever there were an NFL Franchise that defined the name ‘Cinderella,’ it would undoubtedly be the Eli Manning-led New York Giants. After pulling off a pair of Cinderella kind of campaigns to win their last two Super Bowl titles, the G-Men will be looking to don their ‘glass slippers’ once again when the 2015 NFL betting regular season gets underway in September. This look at the Giants’ chances for a magical, Cinderella campaign in 2015, will both inform and entertain.

New York Giants +4500 Look, I know the Giants (6-10 SU, 7-9 ATS, 10-6 O/U) are coming off consecutive losing seasons and haven’t made he postseason in three straight, but the fact of them matter is that only a foolhardy NFL follower would ever put anything past Eli Manning and the G-Men after seeing them win two ‘magical’ titles in 207 and 2011. Yes, they aren’t favored to win anything of consequence in 2015 and the odds are stacked against them, but as always, if everything goes right for the Giants, they’ll at least have a chance to surprise. New York added seven new players this offseason and brought back a half-dozen of their own free agents. Sure, they didn’t add any ‘big-name’ star t their roster, but they did add what appears to be some quality, starting with talented former New England Patriots running back Shane Vereen. While the now, fifth-year back has never rushed for more than the 391 yards he got last season, Vereen has averaged over 4.0 yards per carry in each of the last three seasons after getting just 15 carries as a rookie in 2011.

In addition to Vereen, the Giants also added wide receiver/kick returner Dwayne Harris (Cowboys) and offensive lineman Marshall Newhouse (Bengals) to upgrade an offense that finished a dismal 23rd in rushing On the defensive side of the ball, the G-Men added linebackers Jonathan Casillas, (Patriots) and J.T. Thomas, (Jaguars) as well as defensive linemen George Selvie, (Cowboys) and Kenrick Ellis, (Jets). I really like all four veterans New York added on the defensive side of the ball and I think they’ll make significant contributions to a defense that ranked 29th overall and 30th against the run. “We still have a long ways to go,” co-owner John Mara said recently. “This game still comes down to drafting well, re-signing your own guys, and then filling in in free agency. Every once in a while, you might have a year where you have to spend big, this was not, in my opinion, and our opinion, the year to do that.”

Terms: 2 years, $2.6 million with $400K guaranteed Estimated Cap Figure: $1.2 million Anyway…I believe that New York will look to address their need to upgrade their offensive line in the 2015 NFL Draft while also looking to add quality along the defensive line and in the defensive secondary. The Giants will look to add an immediate starter (or two) on what I believe is a mediocre offensive line while also adding at least one new starter at safety and along on the defensive line. I also like the fact that Manning and immensely gifted wide receiver Odell Beckham Jr. will benefit from having a fully year together in now second-year offensive coordinator Ben McAdoo‘s system. The Giants will also benefit from the return of some of their key performers that were injured last season, starting with wide receiver Victor Cruz Jr. I’m also encouraged that Eli Manning bounced back from a horrendous 2013 season to finish sixth in passing yards (4,410) while completing a career-high 63.1 percent of his passes. New York also ranked a respectable 13th in scoring by putting up 23.8 points per game so is expect them to at least be able to score the ball again in 2015.

The best thing that happened to the Gants last season was that they found out they have the game’s best young wide receiver in the incredibly sure-handed Beckham Jr. The aptly-nicknamed ‘ODB’ had a rookie season for the ages in catching 91 passes for 1,305 yards and a dozen touchdowns (including one of the greatest ever). 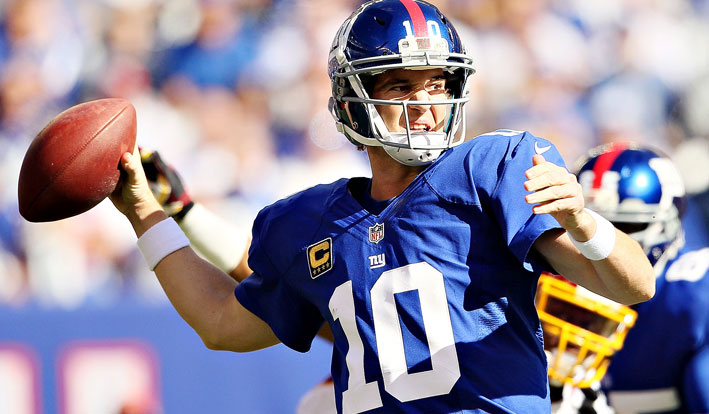 The Giants are right in the middle of the pack with their 2015 Super Bowl Futures Odds, tied with the Texans, Chargers and Dolphins, so even the oddsmakers are giving the Giants at least a halfway decent chance of doing something this coming season. Sure, the Giants need to upgrade their offensive line and improve their rushing attack to balance out their one-dimensional offense, but again, could you ever put anything past Tom Coughlin’s New York Giants after their utterly ‘magical’ Super Bowl-winning titles last decade? With just the 20th toughest schedule in the league in 2015 (122-133-1, .478), I think the New York will be a top contender to pull off a Cinderella season in 2015.
Older post
Newer post