NFL News and Rumors
The critics weighed in heavily against Manziel during a rookie NFL betting season that was, at best, difficult. However, in his preseason debut this past Thursday, he appears to have started to make progress toward becoming what he has always wanted to be: a starting quarterback in the National Football League. The stint in rehab, the money sign and that awful play against Cincinnati last year appear to be in his rear view mirror. Against the Washington Redskins last Thursday, he looked at ease in the pocket. He didn’t try to shoehorn any balls into coverage and eased through his progressions. He completed seven of 11 passes, picking up 42 yards. He didn’t have a touchdown pass, but he also didn’t have a pick. This included a time when the headset inside his helmet stopped working. Manziel maintained his composure and kept running the offense without any visible blips.

No headset? No problem. Manziel called his own play amidst technical dificulties >> http://t.co/8ZO1rheV5l pic.twitter.com/By8PsmeImL

According the Cleveland Browns’ website, Manziel said that this season is “way different. This isn’t [his] first rodeo like it was last year. It was a little bit of a whirlwind last y ear.” Manziel’s highlight came when he galloped for a 12-yard score to put the Browns ahead 14-3 in the second quarter. Just about every observer in the building thought he would throw up the money sign, but instead he juts used a more ascetic fist pump to show his excitement. This is a huge improvement over his 2014 performances. Manziel still admits that he has a lot of work to do to continue to develop as a quarterback. He wished that he could have converted some more third downs during his time on the field or done a better job picking up on some of the protections. When the Browns take on the Buffalo Bills in their next game, they will face a much better defense now that Rex Ryan has taken over across the field – and the Bills already had a salty defense last year. The Bills may have the best defense that Cleveland will face in the preseason. 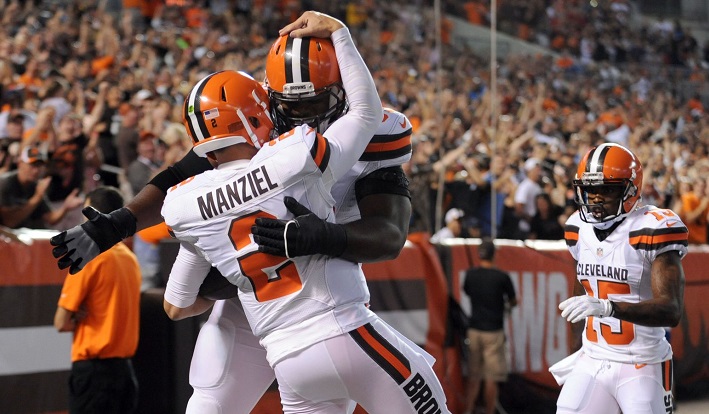 So what does this do to Josh McCown’s status as the starting quarterback? It’s just one preseason game, and a couple of drives do not make a season. However, it is a beginning, and if Manziel really is the future of the Cleveland Browns at quarterback, as the team likely thought when they drafted him last year, Manziel’s preseason debut against Washington this past week may have been the turning point in what could become a solid season – and a solid career. If you look at the place where Manziel was just a few months ago, that represents significant progress. He has definitely done some maturing. If you remember, though, that he came into the league after just two college seasons – and if you remember how immature most 20 – and 21-year olds are, then you can perhaps understand why he has been so unvarnished during his initial season as an NFL player. Johnny Football may be gone, but Johnny Manziel could be much better. Sources: ClevelandBrowns.com (http://www.clevelandbrowns.com/) Wikipedia.org (https://en.wikipedia.org/wiki/Johnny_Manziel)
Older post
Newer post