NFL News and Rumors
Unless a New York federal judge overturns Tom Brady’s four-game suspension, an untested quarterback from Northern lllinois will be leading the Patriots for the first quarter of the 2015 NFL betting season. Just how well will he play? Let’s take a look at the challenge he faces.

Obviously, Bill Belichick liked something about Jimmy Garoppolo; otherwise, he wouldn’t have used a second-round draft choice on him. However, Garoppolo didn’t even have a playbook in college. Now, he has to run one of football’s most ornate systems, teeming with option routes. When he was asked about the system last year, Garoppolo noted “There’s not much simplifying. You gotta know what you gotta know.” During the 2014 regular season, he didn’t get much time at all. His game experience consists of 27 total passes in the regular season. He picked up 182 yards and passed for one touchdown.

If Garoppolo were on a team that prized itself on its offensive line play, things might be less challenging. However, the Patriots’ line in 2014 needed Brady to get rid of the ball quickly to look skilled. The Patriots did only permit 21 sacks, but they were evaluated by Pro Football Focus as the fourth worst unit when it came to pass blocking. Brady was the NFL’s fourth quickest passer from hike to throw.

A Wall of Steel

The first start of Garoppolo’s career is set to take place against a Pittsburgh team on a Thursday night. Both sides will be amped up, but the Steelers (as will the other three teams Garoppolo is set to face) will have their ears pinned back, eager to take down the Patriots juggernaut while their quarterback is on the sidelines. After that, the Pats face Rex Ryan-led Buffalo, Jacksonville and Dallas, who finished 12-4 last year. 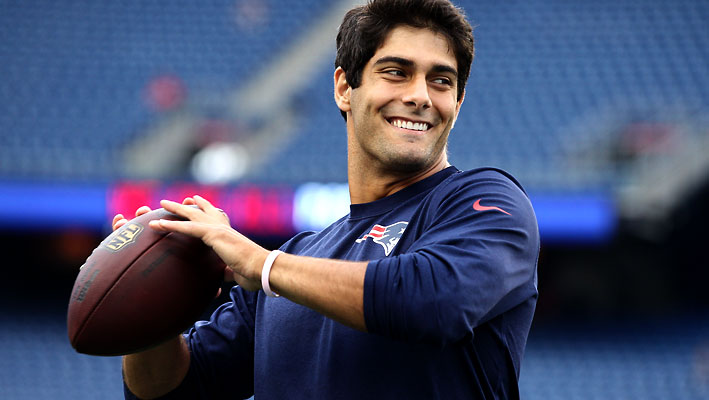 So how will Garoppolo prepare for this immense challenge? The last time he was dumped into action, he was 18, a freshman playing on a defending conference champion Eastern Illinois team that had started the next season 0-3. Garoppolo took the starting job away from a JUCO transfer sophomore after those three losses, starting against Jacksonville State at home. In that game, Garoppolo struggled, throwing a pick in the second quarter. Things didn’t get much better over the course of what would become a 2-9 campaign. In his first four starts, he threw two touchdowns – and nine interceptions. His coaches stuck with him, not wanting that used redshirt to go to waste, and he did improve, ending the season with 14 scores against 13 picks. That means that after those first four games he threw 12 touchdowns and only four interceptions. He didn’t have a terrific team around him, as Eastern Illinois had lost a lot of players to graduation. It wasn’t until halfway through the next season that the light turned on. By his senior season, Garoppolo threw only nine interceptions – against 53 touchdowns. 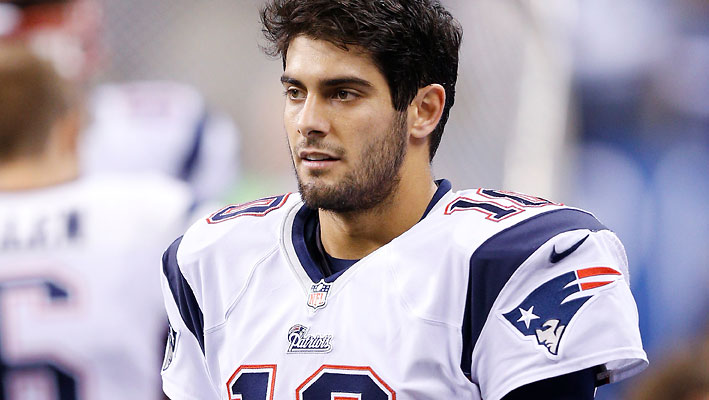 So Jimmy Garoppolo can pick things up over time. However, he won’t have a couple of years in New England. He will have training camp, the preseason and four games. If things go well, Brady will return to a team that is at or above .500, as Jacksonville is definitely winnable and the Pats could walk away from at least one of those other three games with a win. Those who know Garoppolo know he has the poise to handle the situation. It remains to be seen whether he can deliver the results.SourcesNFL.com (http://www.nfl.com/teams/newenglandpatriots/statistics?team=NE)ESPN.com (http://espn.go.com/nfl/player/stats/_/id/16760/jimmy-garoppolo)
Older post
Newer post