NFL News and Rumors
If you’re interested in knowing more about the jargon used in today’s National Football League  and you want to know more about the coaching, positions and plays involved in today’s fast-paced NFL, then you’re in luck, thanks to this mybookie.ag NFL betting jargon original.That’s right football betting faithful, if you want to know about the difference between a Cover 1 and Cover 2 defense or a SAM and WILL linebacker, then you’re in for the ride of your life. Now sit upright and hold on tight, here’s a fun-filled look at some of today’s NFL jargon.

The West Coast Offense was born… In California. Washington? Oregon? The answer ACTUALLY is http://t.co/xkkGRCYJlg pic.twitter.com/tfXZqu8Aft

Bubble Screen – This is a pass play that usually calls for two receivers on one side of the field. The farthest receiver loops behind the inside receiver, catches the ball and tries to take advantage of blocks from the inside receiver and pulling offensive linemen.

Chop Block – An illegal block by an offensive player on a defender already being engaged by another offensive player.Crackback Block – A low block by an offensive player lined up at least 2 yards outside the tackle on a defender positioned inside the offensive player.Cover 1 – In a Cover 1 man-to-man defense, the two cornerbacks cover the receivers one-on-one. Teams need dependable cornerbacks to play this defense because they are isolated on the receivers.Cover 2 –A Cover 2 defense is a technique in which the two safeties play deep zone and each has half the field. It is designed to stop passing teams and means the front seven must be able to stop the run. Offenses often run at this defense to try to force one of the safeties to come up as the eighth man in the box, the area between the linebackers and the front seven.Cover 3– A Cover 3 defense is a three-deep zone that buses three deep defensive backs to all cover one-third of the field.

Dive Play – A quick, straight-ahead run by the halfback or fullback. Often used in short-yardage situation or plays near the opponent’s goal line.Dime Defense – The sixth defensive back who plays on passing downs when the team uses six defensive backs and only five defensive linemen and linebackers. 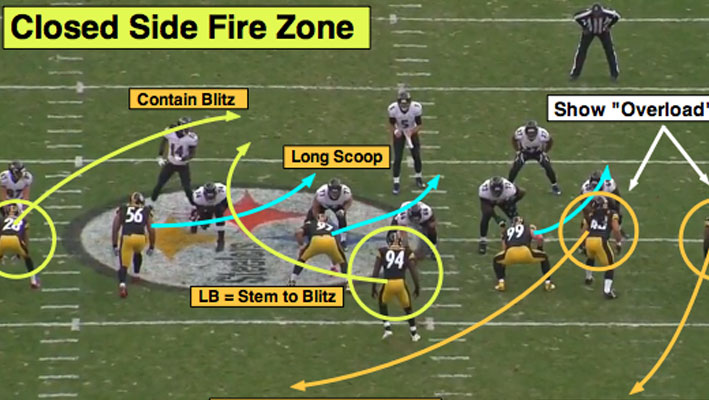 Fire Zones – This is a blitz defense that uses zone coverage behind the blitz and is also known as zone blitz and was made popular by former Pittsburgh Steelers and Carolina Panthers defensive coordinator Dom Capers in the mid-1990s. Out of a 3-4 alignment, multiple defenders, be it linebackers, safeties or even cornerbacks, can blitz from various angles while a zone pass defense is played behind them. The zone blitz often calls for defensive linemen to drop back in pass coverage.

Misdirection – Misdirection is a movement by the player with the ball against the flow of the play, usually in the form of a reverse, bootleg or throwback. Misdirection running plays are called “counter” plays.

Nickel Defense – The nickel is the fifth defensive back who plays on passing downs. He usually replaces a linebacker.

Sam (Linebacker) – The strongside linebacker who plays opposite the tight end.Spread Offense – The spread offense is an offensive attack favored by some NFL teams but far more college programs and features frequent four- and five-receiver formations with one running back and the quarterback operating out of the shotgun. In this system, a short pass is considered as effective as a run.Spy – A defender placed near the line of scrimmage whose primary responsibility is to shadow the quarterback. This is used mainly against mobile quarterbacks, though it also potentially takes the defender out of position to make another play not involving the quarterback.Stunt – A stunt is a maneuver in which two defensive lineman criss-cross or loop around another defensive lineman in order to throw off the timing, direction and leverage of an offensive lineman’s blocks..Single-High – In a single-high defense, one safety plays the middle of the field, acting as something of a center-fielder. 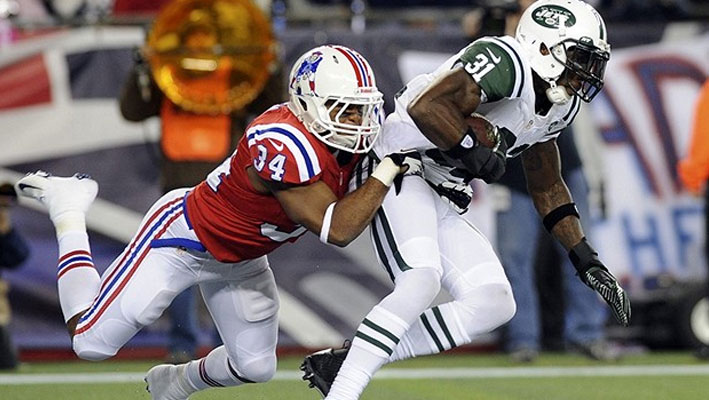 Prevent – This defense is often used late in the first half or at the end of games by a team holding a significant lead. It calls for extra defensive backs playing deeper than usual and three or fewer defensive linemen rushing the passer.

Waggle – A play-action pass in which the quarterback moves wide and deep in the opposite direction of a fake handoff as an offensive lineman pulls with him.Will (Linebacker) – The weakside linebacker who plays on the opposite side of the tight end. It’s a glamour position because he generally makes more tackles and sacks since he doesn’t have to take on the tight end.West Coast Offense – This widely-used offense was created by now legendary former San Francisco 49ers head coach Bill Walsh and is based on short passes to running backs and timing routes with quick slants that enable wide receivers to make long runs after they catch the ball. This offense is now used by several of Walsh’s protégés, though it has also taken on many different forms in today’s game.

X Receiver – The wide receiver lined up by himself opposite the tight end. It’s the position Jared Abbrederis  plays for the Green Bay Packers.

Y Receiver – The third receiver on passing downs. He often lines up in the slot but sometimes flips with the Z receiver.

Zone Blocking – Offensive linemen that protect a certain area instead of blocking a specific defender.Z Receiver – The wide receiver who lines up on the same side as the tight end. Keenan McCardell used to play this position with the Jaguars. Sources:ESPN.com: http://espn.go.com/nfl/player/_/id/16836/jared-abbrederisYahooSports.com: http://sports.yahoo.com/nfl/teams/car/
Older post
Newer post