NFL News and Rumors
The Minnesota Vikings (7-9 SU, 10-6 ATS, 6-10 O/U) pulled off the steal of the 2014 NFL Draft, landing franchise quarterback Teddy Bridgewater with the 30th overall pick while several other teams with quarterback needs passed him by earlier in the round. The Vikings even pulled off a fantastic 7-9 season under no-nonsense head coach Mike Zimmer, all while playing without future Hall of Fame running back Adrian Peterson who missed the vast majority of the season after being suspended for violating the league’s player conduct policy. Now, the Vikings look like they’re primed to take another step forward in 2015, but the big question now is…will Peterson be along for the ride? We’ll examine that question and much more as we size up the Vikings’ NFL lines to cash in on their fun-filled, season-long NFL Super Bowl 50 Odds. 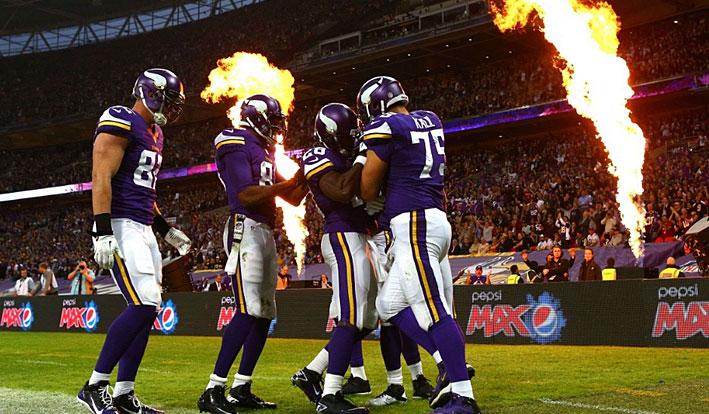 For a franchise that finished the 2014 season with a losing record, the Minnesota Vikings sure had plenty of good news. Much of it came in the fact that the Vikings have apparently found an excellent had coach in on-nonsense leader Mike Zimmer and the franchise quarterback they’ve been looking for ever since Fran Tarkenton hung up his cleats decades ago. Okay, okay, the Vikes have had some really good quarterbacks since then (Dante Culpepper, Warren Moon and Randall Cunningham come to mind), but you get the idea. Bridgewater started the season as a backup to both, Matt Cassel and Christian Ponder, but quickly leap-frogged both en route to earning the starting job and then entrenching himself as its unquestioned future. 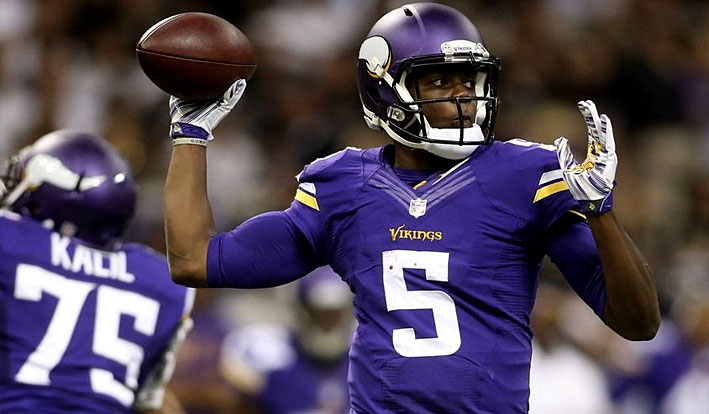 Bridgewater completed an impressive 64.4 percent of his passes and finished 23rd in passing yards (2,919) in just 13 outings. More importantly, the former Louisville star showed a lot of poise in leading Minnesota to an impressive 5-4 record over their final nine games. Last but not least, the Vikings also finished a stellar seventh against the pass and a solid 14th in total defense.

Even with things looking up, Minnesota also experienced their share of bad last season. The Vikings struggled to throw the ball last season, finishing 27th in passing and an identical 27th in total offense, not to mention finishing 20th in scoring (20.3 ppg). The Vikings also struggled to stop the run in a big way, finishing 25th in run defense (121.4 ypg), though they did finish a solid 11th in points allowed (21.4 ppg).

Veteran running back Adrian Peterson’s legal woes for his child-endangerment scandal was publicly humiliating for the franchise – which may or may not have blown its chances of the Future Hall of Fame back returning, though he is under contract for another season. Besides that – and watching former ‘franchise savior’ Christian Ponder attempt to play quarterback, there wasn’t much ‘ugly’ for the Vikes last season. 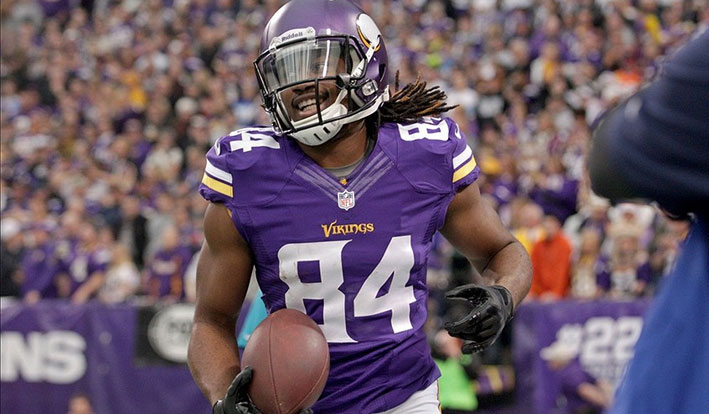 Let’s take a look at Minnesota’s statistics from this past season. 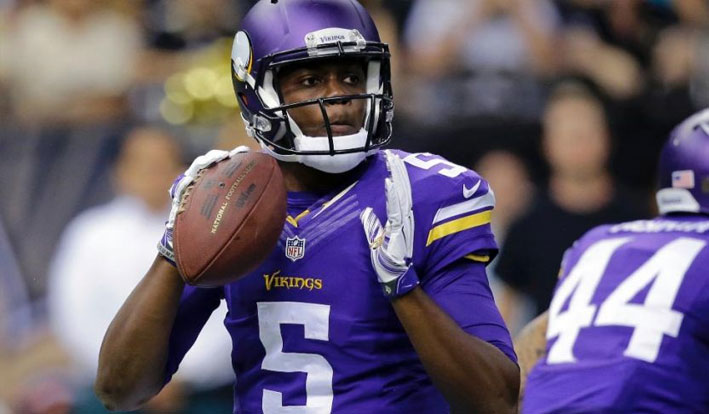 The Vikings probably need to replace starting middle linebacker Jasper Brinkley and find a suitable future replacement for aging veteran Chad Greenway, with the 32-year-old two-time Pro Bowler coming off an injury-filled 2014 campaign. Basically, Minnesota need to add some quality depth here either through the draft or in free agency.

Minnesota did well against the pass last season, but I’m not overly impressed with either Xavier Rhodes (1 INT) or Captain Munnerlyn (2 INTs) and believe the Vikings should replace one or both in the starting lineup.

Maybe it’s me, but I don’t think the quartet of Brian Robison, Sahriff Floyd and Linval Joseph are striking fear in the hearts of their opponents. Athletically gifted defensive end Everson Griffen (12 sacks) however, is a budding star. Backup defensive tackle Tom Johnson looks like he should be starting for Minnesota in 2015 ahead of Floyd. 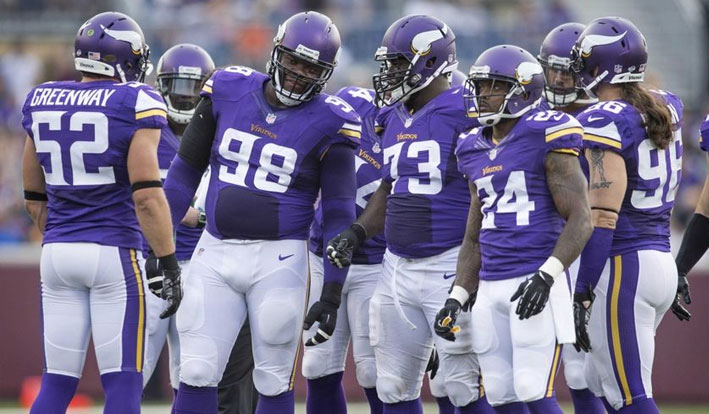 The Vikings have the 11th pick in the draft and could go for Bridgewater’s former Louisville teammate, wide receiver DeVante Parker. Many projections have the Vikes also looking at offensive lineman Brandon Scherff or Ereck Flowers.

The biggest question mark surrounding the Vikings right now is whether or not Adrian Peterson will ever play another down in Minnesota.

TRADE BACK THURSDAY Kevin White is available at #11. Do you pick him or trade the pick? http://t.co/hnCLNr8e4h pic.twitter.com/ufImms0yf2 — Minnesota Vikings (@Vikings) March 20, 2015

The disgruntled superstar has gone on record to say that he has mixed feelings about returning to Minnesota and would one day like to finish his career playing for Jerry Jones’ Dallas Cowboys. If Peterson returns, the Vikings could turn out to really surprise and challenge for a postseason berth. If not, I still believe this team will win at least eight games in 2015. 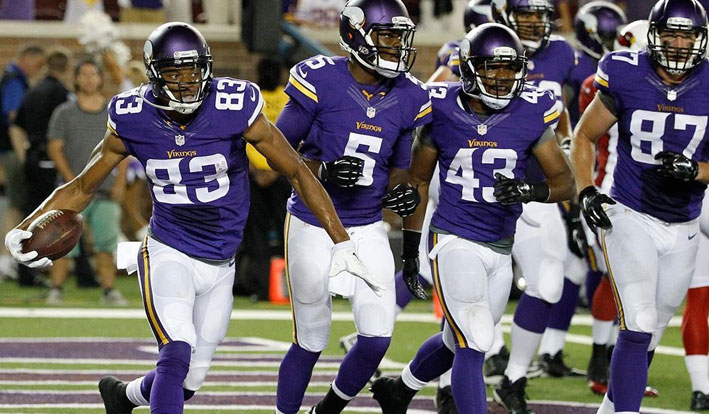 Minnesota has the 12th strongest schedule in the league in 2015 (138-118, .539) but that doesn’t concern me much as I really believe that Mike Zimmer has his team headed in the right direction. If the Vikings can re-sign some of their free agents like Tom Johnson and running back Matt Asiata, while adding an immediate starter or two in the draft, I believe they could approach nine wins or 10 at the very most. However, I think a .500 campaign sounds about right at least until we all find out what’s going to happen with Adrian Peterson. The main things is that Minnesota has found a real gem in teddy Bridgewater. Now all they have to do is keep him protected and surround him with some athletic talent.