NFL News and Rumors
Ever since the St. Louis Rams selected running back Todd Gurley with the #10 pick in April, everyone has been wondering whether his ACL tear will be healed in time for him to play soon. NFL.com’s Ian Rapoport reports that Gurley will not appear in the preseason, and he is likely to miss a few games at the start of the regular season. Rapoport notes that the ligament itself is strong but the surrounding tissue is still too weak for him to play, and the Rams will not risk putting Gurley back into action too early. Because Gurley has gifts that have not been on display by a rookie since the arrival of Adrian Peterson, the Rams are right to be cautious. If he can come back full strength, he could have a monster of a second half of the NFL betting season.

The Atlanta Falcons continue to negotiate a long-term extension with wide receiver Julio Jones. Falcons GM Thomas Dimitroff has considered negotiations to be professional and considerate of team needs, according to NFL.com’s Ian Rapoport. Given that some of the other elite receivers in the league have conducted noisy negotiations with their teams this summer, even threatening union action for collusion when a big payday didn’t come yet, Jones looks to be a player who wants to stay with his team for the long haul and is willing to structure his deal accordingly.Even though the Houston Texans have brought in Ben Malena, Joe McKnight and Pierre Thomas to audition for the spot that Arian Foster has vacated because of his groin surgery, they haven’t signed any of the three and appear to be comfortable with the backups they have – and they don’t see a need to bring in Ray Rice. Aaron Wilson of the Houston Chronicle reports that the team did offer a veteran minimum contract ($870,000) to Thomas, but Thomas turned him down. If the trifecta of Chris Polk, Jonathan Grimes and Alfred Blue do not have a productive preseason, the Texans may go back to Thomas with a bigger offer. 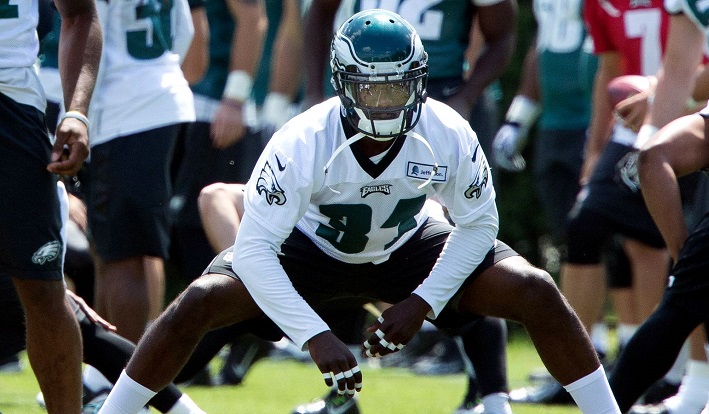 Zach Berman with the Philadelphia Enquirer reports that the Eagles plan to have free-agent cornerback Byron Maxwell shadow the other team’s best receiver some of the time during the season. Recently, the Eagles have had their cornerbacks stay on the same side all the time, like the Seahawks do, but it looks like the Eagles might give Maxwell more responsibility. Given the awful status of the Eagles’ pass defense the past two seasons, it’s worth considering just about anything to bring an upgrade. Maxwell does have stiff hips that make it difficult for him to stay on the best receiver all game long, though, so this may be a situation where Chip Kelly wants to pick and choose the right situation.Remember when San Francisco 49er offensive tackle Anthony Davis retired? He might be back next season. He might be surprised, though, to find the welcome muted, as teams are often less than enthusiastic with former retirees who left the league with scant notice. It’s also hard for players to come back from long absences that don’t involve injury rehabilitation and then play at an elite level.Sources:ESPN.go.com (http://espn.go.com/nfl/player/stats/_/id/17319/ben-malena)NFL.com (http://www.nfl.com/player/anthonydavis/2508079/profile)
Older post
Newer post