NFL News and Rumors
For most quarterbacks in the NFL Odds, it takes around two or three years to typically tell whether or not someone will have successful careers as Pros. That, however, hasn’t been the case with Washington Redskins’ quarterback Robert Griffin III. A No. 2 overall pick in 2012, Griffin entered the league touted as the most NFL-ready quarterback in his draft class, with nothing but big things expected from him. Three years down the line, RGIII has become a constant subject of ridicule in all manner of proportions you can think of.Not that he’s been all that bad of a player. In his rookie 2012 season, he recently completed 65.6 percent of his passes for 20 TDs and 5 picks, leading the Redskins to the playoffs that year. However, after such a promising start, Griffin somehow lost his way, throwing for just 1,694 yards with 4 TDs and 6 picks in 2013, which led to him being benched in 2014.Now entering his fourth year, Griffin has received two morale-boosting offseason messages that are expected to elevate him for a “big jump” in 2015. Firstly, Washington’s coach Jay Gruden cleared the debates about who will be the team’s starting QB (between RGIII and Kirk Cousins) in 2015 by saying, “We’ll obviously go into season with Robert as our No. 1 guy.” With Griffin as the starter in 2015, he should get a lot of game time to prove himself.Secondly, Washington’s General Manager Scot McCloughan announced in April that the Redskins will exercise the fifth-year option on the quarterback, putting him under contract with the team until the end of the 2016—something that is likely to unload the pressure of being kicked out of the team.And on top of all that, the Redskins hired Matt Cavanaugh as quarterbacks coach after not having one in 2014, meaning Griffin and Co. have someone skilled enough to guide and train them. In light of these offseason developments, coupled with the trade-ins of new players and solid draft of new players, can Griffin make the big jump expected of him? 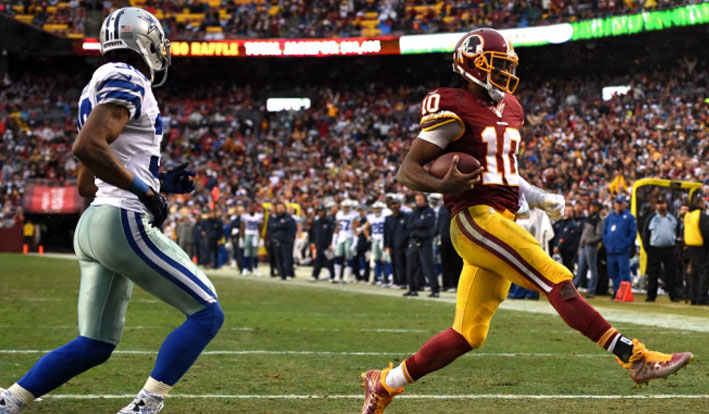 Going by a strong start in 2012, followed the lackluster 2013 campaign, and then an injury-plagued, subpar 2014 (that he mostly spent on the bench), it is hard to put a finger on what Griffin will be able to offer. On paper, the 6’2′, 222-pound Baylor product has the mental skills and physique qualities that can easily make in an impact player. But in reality, his skewed numbers and shifty performances in the NFL orient more questions than answers.All in all, Griffin currently enjoys the full support of his coach, his general manager, a new quarterback coach and a good number of Washington fans, which should encourage a positive season for him in 2015. However, it remains to be seen how Griffin will get to use the rare—and probably final—chance he has been given by the Redskins.Sources:Redskins.com: http://www.redskins.com/news-and-events/article-1/Redskins-Bring-In-10-In-2015-Draft-Class/8b02f172-a86c-4ddb-918a-27cfb7b412f6Washingtonpost.com: http://www.washingtonpost.com/blogs/football-insider/wp/2015/05/11/robert-griffin-iii-and-jay-gruden-expect-familiarity-to-breed-improvement-in-year-2/
Older post
Newer post