NFL News and Rumors
Saying that Johnny Manziel was a NFL betting bust in his first rookie season with the Browns would be an understatement of the highest order. His weak arm strength, poor playing mechanics, subpar quarterback IQ, irritable on-field attitude, and virtually everything he did was wrong. This was not the dominant footballer who won the hearts of the Heisman Trophy voters in 2012 after having a monster season at Texas A&M… The pocket-throwing specialist who boasted of a 73 percent completion of his throws and used his speed to keep defenses at bay, while creating extra spaces and times for his receivers… This was not the Johnny Football we had mesmerizingly watched and easily loved in his very successful college career that oozed of charisma and leadership. In 2014, at the biggest of stages in football, Manziel had failed miserably and was a pathetic shadow of his media-trumpeted shining Pro-football career. But then again, with just seven quarters of football as a rookie, it’s probably unfair to be highly critiquing of Johnny Football. After all, New Orleans QB Drew Brees was a slow starter in the league, but was able to work on his game and is now among the best passers in the league. Not to mention, the confused and unstable football system in Cleveland is a near-guarantee for failure by any player, so some share of the blame goes to the team. Nonetheless, with Manziel’s constant off-field drama and the demand for results by his employers, the scrutiny and pressure will only increase for him. Therefore, the sooner he can find his way, the better it will be for him and his beleaguered pro-career on and off the field.

To his credit, Manziel hasn’t gone the path taken by most under-fire players, where they sit down and bathe themselves in self-pity and denial, while being overly defensive about their shortcomings. Instead, he admitted to having a poor start in the NFL and promised to work on himself. And true to his word, he checked into a rehabilitation center for 10 weeks to deal with his character concerns and alcohol-abuse problems. Since coming out of rehab, I am yet to hear of a scandal related to the player and his usual partying drama. I did, however, hear about him getting angered by a fan who was harassing him for an autograph, and as a result, he allegedly threw a water battle at him. The Johnny Football of 6 months ago would have probably boxed the hell out of that fan, so If you asked me, I’d say that’s change right there…! Plus, change is a process that happens progressively. 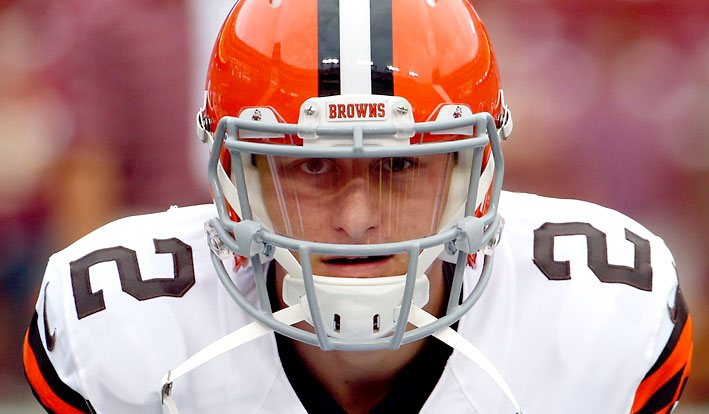 On the field, where it matters most, we are yet to see what becomes of him if (and when) he gets the chance to play in 2015. However, Cleveland’s new offensive coordinator John DeFilippo had nothing but good things to say about Manziel in his initial practices with the team in May. “From the moment he stepped in this building from the last two weeks, he’s been nothing but a consummate professional,” DeFilippo said last month after rookie minicamp practice. “He’s spent every hour that he’s been allowed to spend in this building. We give them worksheets every Tuesday and every Friday, and they’re done to the unbelievable detail that we need an NFL quarterback to do.” DeFilippo, who was meeting Manziel on the field for the first time since joining the team recently, went on to say, “I can’t predict the future, but all I can do is tell you right now Johnny Manziel is putting him(self) in a position to be a quarterback in the NFL.” Earlier this year, Mike Mayock (a venerated draft expert for NFL.com and former defensive back at Boston College), who was one of the people that tipped Manziel to be a hit in the NFL prior to his draft, admitted that he might have gotten carried away by the college sensation’s hype and overlooked some details about him. Nonetheless, he reasserted that his belief in Johnny Football and his capacity to be an impact player was still unshaken.. “As far as Manziel’s future is concerned, I still buy into the quarterback,”’ Mayock said. “I still think he can learn to be a difference-maker in this league. But I think almost all of it is contingent upon whether he grows up. Is he able to handle himself, is he able to overcome the problems he has and move forward with football.” 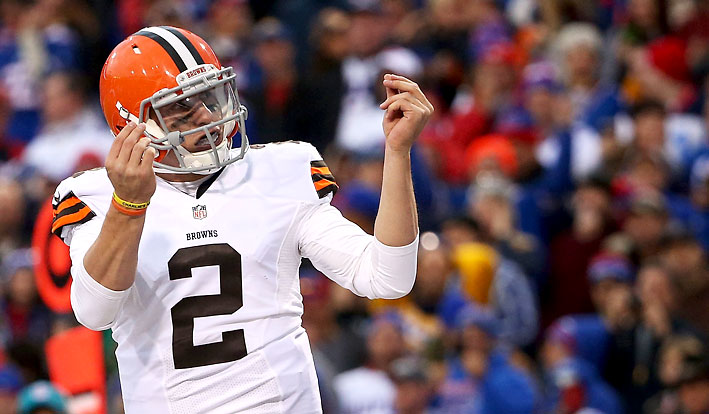 Even Browns owner Jimmy Haslam, who has been severally criticized for rushing to sign Manziel in spite of the player’s well-known off-field baggage and unrefined passing game, is still a believer in the Johnny Football project. Speaking about the QB and his future in the team, Haslam commented by saying, “Do we still think he can be a starter in the NFL? And the answer is consistently yes.”

Johnny Football, the 2015 NFL Season and Beyond…

Whereas the front office in Cleveland has been (and still is) supportive of Manziel, the majority of football pundits out here and a good section of the Browns supporters have been vocally negative about his chance to make a positive mark in the team. Fortunately for the 2015 sophomore quarterback, Coach Mike Pettine ensured that he won’t be too pressured about next season, as he selected veteran Josh McCown to be starter in Week 1. The hope is that the progressive off-the-field personal growth by Manziel will eventually translate to progress on the field, and once that happens, he can be duly incorporated in the team. Personally, I am a believer in second-chances, so I have no problem with the team giving him another shot to prove his worth. Still, it would be a lie if I said that I don’t have my reservations about Johnny Football, going by his sly nature and ability to manipulate people’s minds through the media. For all I know, the rehab talks and all could be other plots by Manziel to dupe fans and the management into loving him. I mean, his “public relations” team hogwashed his substance problems and overreliance on making plays with the leg than the arms prior to his draft in 2014, which tricked the Browns into thinking that he was a worthy No. 22 overall pick. Repeating a similar trick now would thus not be far-fetched for the media-loving Manziel. Nonetheless, giving him the benefit of doubt, I believe that both the fans and management should show patience with Manziel. With sufficient support from the fans and his coaches, and a lot of hard work on his part, the 22-year-old should be able to turn his life (and career) around and make something out of it, even if it is outside the NFL. A career in acting would perhaps suit him if football doesn’t give, considering he is a good actor and most of his BFFs are Hollywood darlings. Sources Cleveland.com (http://www.cleveland.com/browns/index.ssf/2014/12/johnny_manziel_i_dont_think_it.html) ESPN.com (http://espn.go.com/blog/cleveland-browns/post/_/id/13682/more-offseason-praise-for-johnny-manziel)
Older post
Newer post