NFL News and Rumors
Well, the real answer to this question is one that online betting fans already know, because Tim Tebow was the starter in Denver for some time. The Broncos nabbed him 25th overall in the 2010 draft, and Denver Post columnist Woody Paige said that Tebow would end up providing a “Mile High Reward.” He would start the last three games of that first season.

Heckler to Johnny Manziel: ‘Ryan Tannehill is way better than you’ – http://t.co/5hkpbDAbat pic.twitter.com/0tI4kIPVGf

However, in 2011, Broncos’ starter Kyle Orton struggled, getting the team off to a 1-4 start. In that fifth game, Tim Tebow replaced Orton at halftime and almost brought the Broncos down from a 16-point hole, passing and running for one touchdown each in the fourth quarter. The Chargers would win the game, but Tebow had the starting job. The next week, the Broncos fell behind 15-0 in Miami but roared back for an 18-15 overtime win. As the season progressed, Tebow led his team to a number of impressive wins, although three losses to end the season were troubling. Even so, the Broncos managed to qualify for a spot in the playoffs, hosting the Steelers in the first round. Broncos vice president John Elway (also the Broncos’ former star quarterback) publicly urged Tebow to play with more certainty. In that first playoff game, the teams went to overtime, and Tebow threw an 80-yard bomb to Demaryius Thomas on the first play to seal the win for the Broncos. Denver would lose to New England the next week, 45-10, but despite having the lowest completion rate in the NFL, Tebow was heading into 2012 as the Broncos’ starter. 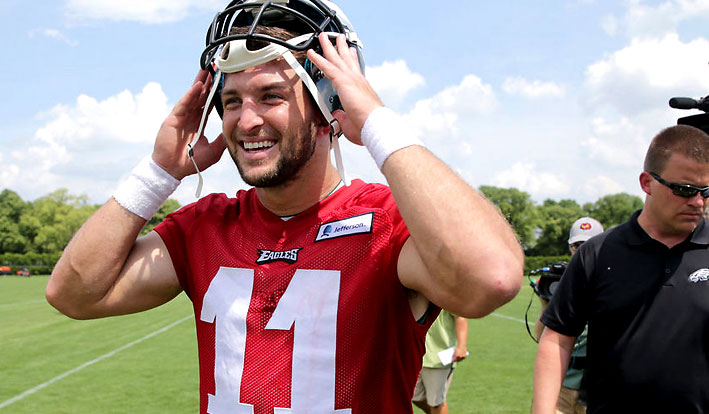 In the offseason, though, the Broncos signed Peyton Manning through free agency as their quarterback. He signed contracts with the Jets and the Patriots and then spent a couple years out of the league. Now, he is on the Eagles’ roster, and given the lingering injuries to Sam Bradford and the doubts about the quality of Mark Sanchez, it will be interesting to see if he takes the field with Chip Kelly’s offense.Johnny Manziel entered the league with a similar degree of splash to that of Tebow. A Heisman Trophy winner as a freshman, Manziel did not quite achieve at the same level in his sophomore season, but the Cleveland Browns still picked him up in the first round. Even so, the Browns elected to bring Manziel along slowly, leaving journeyman Brian Hoyer in the starting role. Even though he flirted with consistency, though, Hoyer showed that he didn’t have what it takes to lead the Browns to the playoffs, and so he ended up in Houston to fight for the starting job there in 2015. The Browns have brought in Josh McCown who looks like the favorite to stat in 2015. Even though Johnny Manziel went to rehab and appears to have calmed down, such incidents as his throwing a water bottle at some heckling fans in the Byron Nelson golf tournament this past weekend do not help his reputation as a player who may be more trouble than he is worth. 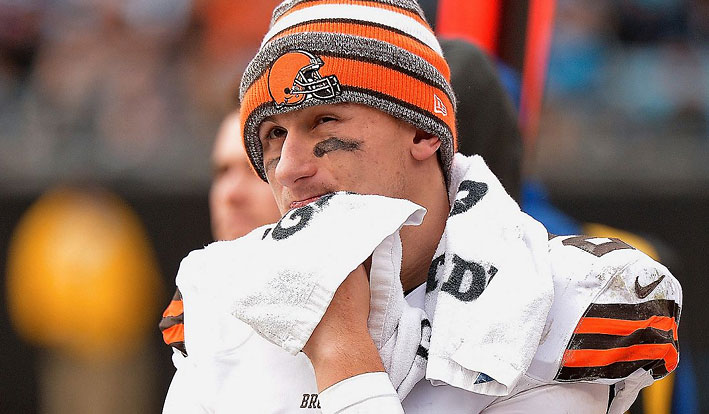 Manziel did start two games for the Browns in 2014. In Week 15, the Browns were drubbed by their division rivals, the Cincinnati Bengals, 30-0. Manziel threw for 80 yards and earned a passer rating of 27.3 because of two interceptions. In Week 16, he started against Carolina but left with a hamstring injury just before halftime. The Browns would fall 17-13. His hamstring kept him out of the Week 17 finale against Baltimore. While many rookie quarterbacks have iffy numbers, the fact that more than 20 different people in the Browns organization questioned his work ethic and commitment to the team means that his future in Cleveland may be short indeed. SourcesESPN.com (http://espn.go.com/nfl/player/_/id/16736/johnny-manziel)Yahoo.com (http://sports.yahoo.com/nfl/players/24000/)
Older post
Newer post