NFL News and Rumors
On Saturday, August the 8th, a total of eight men will receive professional football’s highest honor during the 2015 Pro Football Hall of Fame Ceremony. Those eight NFL stars will be officially inducted on Sunday, August 9th at Tom Benson Hall of Fame Stadium in Canton, Ohio, an honorary enshrinement that will be marked by the Hall of Fame Game between the Pittsburgh Steelers and Vikings, which will take place on the same day. Before we get down to talking about our celebrated NFL betting stars, let’s first have a peek at the basic details about the event, as is summarized below.Event: Hall of Fame CeremonyDate: August, 8, 2015Starting Time: 7:00 PM ETLive TV Broadcast: NFL NetworkThe Pro Football Hall of Famers: Bill Polian, Charles Haley, Jerome Bettis, Junior Seau, Mick Tingelhoff, Ron Wolf, Tim Brown and Will Shields.Bill Polian, Contributor, 72 yearsPolian had a stellar reputation for turning poor or average franchises into dominant playoff teams, with his contributions in the 32 years spent in the NFL leading to 5 Super Bowl appearances. In the early 1990s, he led the Buffalo Bills to four back-to-back Super Bowl appearances. After his time with the Bills, he became the GM of Carolina between 1995 and 1997 and, in his second year, led the team to its only NFC Championship Game. In 1998, he became president to the Colts and was largely responsible for the drafting of Peyton Manning with the No. 1 overall pick in his first year. Soon after, he led the Colts to their first Super Bowl appearance in 36 years, which resulted in a win over the Bears.

Charles Harley, Defensive End/Linebacker, 51 YearsA five-time Pro Bowler and a two-time All-Pro pick, Harley boasts of a reputation of being the only player (to date) to have ever won five Super Bowls, three of them coming with the Cowboys and two of them with the 49ers. In his 13 NFL seasons (8 with the Niners and 5 with the Cowboys), he totaled 100.5 sacks, 8 fumble recoveries and 2 interceptions, making him one of the 31 players in the league’s history to have ever reached the 100-sack mark.Jerome Bettis, Running Back, 42 YearsBettis is famously remembered for being one of the best rushers in the game, becoming a six-time Pro Bowler and a two-time first-team All-Pro. He racked up two 1000-yard rushing seasons in his three years with the Rams, who drafted him 10th overall in the 1993 draft. In 1996, he joined the Steelers, where he compiled six more 1000-yards rushing seasons and had a wildly successful career. After winning Super Bowl XL with the Steelers in 2006, “The Bus” called it quits to the game in an emotional way. Jerome Bettis’ 13,662 yards stand sixth-best on NFL’s All-time career rushing yardage list.Junior Seau, Linebacker, Passed on at 43 YearsSeau’s induction to the Hall of Fame has been a subject of a lot of controversies and heated discussions over the recent weeks. A 12-time Pro Bowler and an eight time first-team All-Pro in his 20 years in the league, Seau was certainly a big-achiever in the league, truly deserving of being selected to the league. Of course, he never won the Super Bowl (despite coming close to it with the Chargers in 1994 and the Patriots in 2007), but the fact that he was named as the NFL Defensive Player of the Year in 1992, and earned a call-up to the NFL All-Decade Team of the 1990s shows his class. Sadly, Seau committed suicide in 2012 at the age of 43, with reports indicating that his chronic traumatic encephalopathy (CTE) was the main reason behind the suicide. Prior to his death, the fifth overall San Diego pick in the 1990 draft had reportedly wanted his daughter, Sydney Seau, to introduce him if he made the Hall of Fame. Unfortunately, the current NFL rules don’t allow for such a provision, something that has sparked heated discussions and emotional debates. Whether or not Sydney and Seau’s family wishes are granted by the NFL, the undeniable truth is that his legacy on the gridiron will live on forever in our fondest of memories. #RIPSEAU 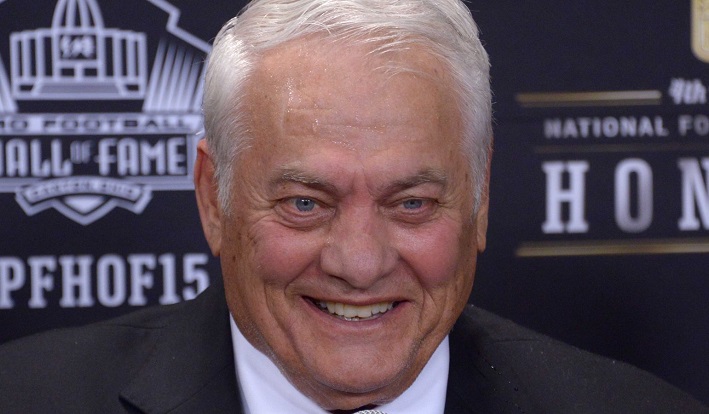 Mick Tingelhoff, Center, 74 YearsLong-retired but not forgotten, Tingelhoff was a real anchor in Minnesota’s offense between 1962 and 1972, with his exploits for the team earning him the Vikings Ring of Honor and honorable retiring of his No. 53 t-shirt. Impressively, Tingelhoff made 240 consecutive games for the Vikings and played in all four of Minnesota’s Super Bowl appearances in the 1970s, including a win in 1969. His six Pro Bowls and Five first-team All-Pro bids are a testament to the kind of man Tingelhoff was an asset for the Vikings and the sport, at large.Ron Wolf, Contributor, 76 YearsIn his 23-year stay with the Raiders, Wolf earned a reputation as man with a good eye for talent, helping in the recruitment of some of the best talents in the NFL and playing a pivotal role in all three of the Oakland’s Super Bowl wins in 1976, 1980 and 1983. His lengthy time as a venerated personnel man with the Raiders was followed by a 10-year stint with the Packers, where he helped Green Bay trade for QB Brett Favre in 1992 and hire Mike Holmgrem as coach, changes that sparked solid changes for the team. In his time at Green Bay, the Packers won Super Bowl XXXI and nearly defended the title when they lost to the Broncos in the following year.Tim Brown, Wide Receiver, 48 YearsBragging of becoming the first wide receiver to win the Heisman Trophy in 1987, the talent of Brown was something that was already evident at a very young age. In the NFL, he didn’t lose a step, impressing all the way since being drafted 6th overall in 1988 to when he hanged his playing boots 17 years later. The nine-time Pro Bowler ranks fifth on the all-time career receiving yards list (14,934) and boasts of many other individual honors, including being the oldest player (at (36 years, 97 days) to register 12-plus catches in a single game, the oldest player to score a touchdown on special teams, and record for most consecutive games (147 games) with 2-or-more receptions.Will Shields, Offensive Guard, 43Often described as a generational talent and the heart-and-soul of Kansas City’s offensive line in the 14 years he spent with the Chiefs, Will Shields was indeed nothing short a cornerstone in his career, with 1,000-yard rushers like Marcus Allen, Larry Johnson and Priest Holmes standing to be counted as some of the people he helped to success. Impressively, the 12-time Pro Bowler, 2000s All-Decade Team member and two-time All-Pro OG started all but one of his 224 games at guard, exceeding the expectations of being selected as a third-rounder in the 1993 NFL Draft.Sources:Wikipedia.org (https://en.wikipedia.org/wiki/Jerome_Bettis)NFL.com (http://www.nfl.com/player/willshields/2502936/profile)
Older post
Newer post