NFL News and Rumors
Each and every season, a handful of teams in both conferences generally overachieve and exceed beyond even the most optimistic expectations while either finishing with an unexpected playoff berth – or a season that comes close to it. With the 2015 NFL betting regular season quickly approaching, this expert betting breakdown will highlight my top five NFC playoff sleeper candidates for the upcoming campaign. The only criteria for making this list are that each team not be considered a leading playoff candidate heading into the upcoming campaign. With NFL training camps starting to heat up everywhere, let’s rock and roll.

They could surprise if…The Adrian Peterson drama notwithstanding, the Minnesota Vikings are clearly a team on the upswing in my eyes. I love young quarterback Teddy Bridgewater and genuinely believe that head coach Mike Zimmer is the right coach to get the NFC North hopefuls transformed from annual doormats back into the perennial playoff participants they once were.Bridgewater proved he belonged in the league in a big way in 2014 after completing an impressive 64.4 percent of his passes for 2,919 yards with 14 touchdowns and 12 interceptions in a dozen starts. More importantly, the 22-year-old Bridgewater showed poise beyond his years by making smart, quick – and accurate – decisions with the ball.The no-nonsense Zimmer also showed me a lot last season, both strategically – and being able to coax the best out of his players. If Adrian Peterson doesn’t ‘dog it’ in an effort to get himself traded (he won’t) the Vikings could leap-frog Detroit in the race for second place, behind Green Bay, in the competitive NFC North.Minnesota added speedy wide receiver Mike Wallace in the offseason and a bunch of athletic young players via the draft, like cornerback Trae Waynes (No. 11 overall), linebacker Eric Kendricks (No. 45) and defensive end Danielle Hunter (No. 88). If all goes well, not only could Minnesota reach the postseason in 2015, but they could even pull off a playoff upset – or two.The likely scenario is…I think the most likely scenario for Minnesota in 2015 is that the Vikings take a slight step forward to…let’s say….nine wins, which, I believe will get them thisclose to a postseason berth, but not in the door. However, let me also say that I fully believe the Vikings are going to be a legitimate Super Bowl title contender in 2016 if they simply stay the course and both, draft well and keep their most important core players.

They could surprise if…The New York Giants could surprise simply because they are….the New York Giants. I don’t want to beat a dead horse, but New York’s two Super Bowl titles in 2008 and 2012 show that nothing is truly impossible for the Giants, even if the cast of characters has changed over the years.Eli Manning had arguably the best season of his career in 2014 as he set new personal bests in completion percentage and quarterback rating while posting the second-best numbers of his career as far as touchdown passes (30) and passing yardage (4,410). Manning also threw the fewest interceptions he’s had in five years. The return of Victor Cruz opposite explosive sophomore wideout Odell Beckham Jr. could make the Giants one of the more potent offenses in the league.It is on the defensive side of the ball that will likely define the Giants’ 2015 campaign. New York’s defense was butt ugly last season, finishing 29th overall, (375.8 ypg) while allowing a whopping 135.1 rushing yards per game (30th). 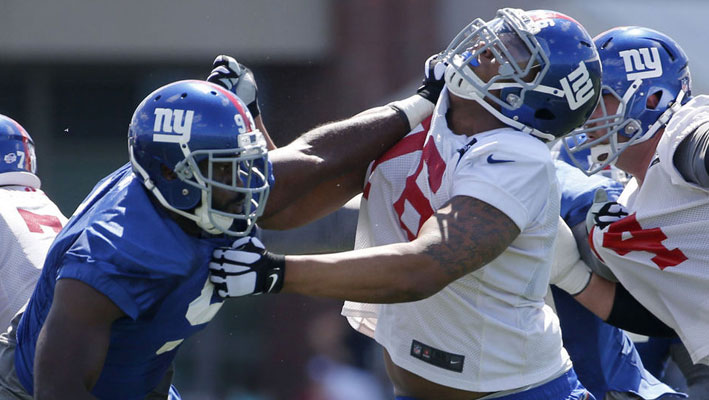 The likely scenario is…Although the Giants won a modest six games in 2014, I think it’s quite possible that New York could approach nine wins in 2015, though that figure likely won’t put them in the postseason. The Giants drafted well in adding tackle Ereck Flowers and safety Landon Collins with their first two picks in the 2015 NFL Draft, but I believe they’ve got too many positions to upgrade all at once this season, not to mention, not enough quality depth behind their starters. On the positive side…an 8-8 or 9-7 campaign in 2015 would be a step forward for the Giants from the mediocre team they’ve been the last couple of seasons.

They could surprise if…I like Washington’s offense – if they get some competent play out of scheduled starter Robert Griffin III that is. After making a modest seven starts and playing in nine games last season, Griffin III is getting what amounts to his final chance to prove he’s Washington’s long-term answer at quarterback. If Redskins head coach Jay Gruden is as smart as he believes he is, then he’ll get underrated running back more carries in 2015 than he got last season. Morris has topped the 1,000-yard mark in each of his first three seasons in the league but his carries have declined in each of the last two seasons.I like Washington’s offseason additions of veteran nose tackle Terrance Knighton and most recently, disgruntled former Saints linebacker Junior Galette and cornerback Chris Culliver, but this team still needs to prove to me they’ve upgraded a defense that ranked 30th in points allowed last season (27.4 ppg).The likely scenario is…I think Washington could improve beyond anyone’s wildest imaginations in 2015, I just don’t think that’s the most likely scenario – unless RG3 suddenly returns to the play-making baller that he was as a rookie three years ago.No, I believe the most likely scenario is that Washington improves to win either seven or eight games in 2015, mostly because I no longer believe in RG3 – or any of the team’s other quarterbacks for that matter.

They could surprise if…The Falcons still have one of the more potent offenses in the league with veteran signal-caller Matt Ryan under center and elite wide receiver Julio Jones his favorite target. The Falcons finished eight in total offense in 2014 and a solid 12th in scoring (23.8 ppg) so I suspect scoring won’t be a problem for the Falcons in 2015.Defensively, the Falcons were a mess a year ago, finishing dead last in total defense and against the pass while also ranking 27th in points allowed (26.1 ppg). If new head coach Dan Quinn can get the Falcons to play any sort of competent defense, Atlanta could get right back in the postseason in 2015. I love the additions of linebacker Vic Beasley with the eighth overall pick in the draft and cornerback Jalen Collins with the 10th pick in the second round. Oh, and let me not forget to mention that Atlanta plays in a fairly weak division in the NFC South with a trio of teams that all look like they could be just so-so this coming season. The likely scenario is…I think the most likely scenario is that Atlanta improves dramatically on the defensive side of the ball and make a real run for the division title and accompanying playoff berth. Every team in the NFC South has blemishes thy have to deal with, even reigning division champ, Carolina. I’m expecting the Falcons to improve from the six wins they recorded last season to at least eight victories, which should be enough to at least give them a shot at the division crown.

They could surprise if…If Nick Foles turns out to be the real deal at quarterback (he will) and rookie running back Todd Gurley follows suit and proves he’s going to be the star player that he was drafted to be, the Rams could improve beyond anyone’s wildest expectations.St. Louis also added offensive lineman Robert Havenstein, Jamon Brown and Andrew Donnal in the draft to shore up an offensive line that didn’t protect former quarterback Sam Bradford very well during his time with the team. The Rams have arguably the best defensive line in the league and have generally been solid on that side of the ball under head coach Jeff Fisher.If Foles plays like he did in 2013 when he threw 27 TD passes and just two interceptions and the rest of the Rams skill position players experience even modest success, St. Louis could stun. If not, another 7-9 or 8-8 campaign is the most likely scenario.The likely scenario is…It’s pretty unfortunate that the Rams play in the same NFC West division as Seattle and Arizona, but hey, it is what it is. Having said that, let me also say that the Rams are fighting a losing battle against their own division opponents, mostly because they don’t have enough talent on the offensive side of the ball. I’m thinking St. Louis needs at least one more year of upgrading their roster if they really want to challenge the Seahawks and Cardinals, two teams that I believe are going to be perennial conference title contenders as long as Pete Carroll and Bruce Arians are leading the way. I’m thinking somewhere in the neighborhood of eight wins sounds about right for the Rams in 2015.
Older post
Newer post