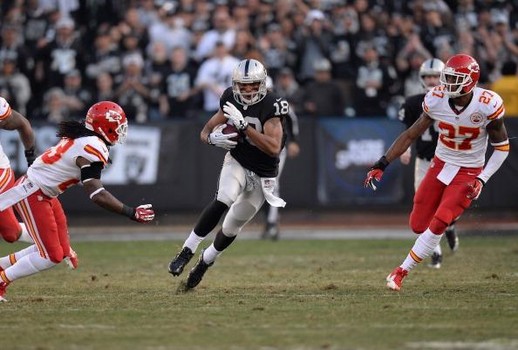 NFL News and Rumors
How good or bad a team is can usually be pretty well established by the time you reach and cross the midway point of the season. We really didn’t have to wait that long to see how bad the Oakland Raiders are, as they have been about as awful as it gets right from Week 1. They are currently at 0-10, and have a legitimate shot of going winless the rest of the way. Things don’t look to be much easier for them this weekend when they have to face a Kansas City Chiefs team that is very much in form. Get the latest TNF betting odds.Venue: O.co Coliseum, Oakland, CaliforniaDate: Thursday, November 20, 2014Time: 8: 25 PM ETTV: NFLThe Chiefs have reeled off 5 in a row on their way to a 7-3 record that sees them sitting with the same mark as the Denver Broncos in the AFC West. It is only a slightly better conference record that is keeping Manning and the Broncos on top. The Chiefs will have the opportunity to better their 1-1 division record with a win over the Raider on Thursday night, whilst also getting the chance to show a national audience that they are the real deal. This is a team that has a balanced offense, and which does a great job of establishing the run in order to set up the pass. They don’t tend to dominate games, but always seems to do just enough to come away with the win.The Oakland Raiders really don’t do anything very well, and it’s tough to see what they can possible conjure up to get anything out of this one. The Chiefs may be a little susceptible to the run, but this Raiders team is horribly ineffective on the ground, failing to pass the 100-yard rushing mark in each of their last 5 outings. Their biggest mark in that span was 71 yards, which is just not going to get it done against a team as accomplished as the Chiefs. They have also developed a habit of turning the ball over, which has definitely been a contributing factor in their awful season so far.BETTING ODDS:The biggest surprise with the line for this game is that it’s not bigger than the 7-points that the bookies have given the Chiefs. Kansas City are an impressive 8-2 ATS this season, which includes going 6-1 ATS versus conference opponents.What may come as a surprise is that the Raiders are 5-5 ATS this season, and are in fact 2-1 ATS when playing division foes. These two have actually split things right down the middle over the past three seasons, going 2-2 SU and ATS during that time.These are two teams going in complete opposite directions this year, and the Chiefs have to be looking at this one as a way to put some more pressure on the division leading Broncos. That should be reason enough for them to put on a show, which should result in them coming away with a double digit win.
Older post
Newer post