NFL News and Rumors
The top two picks in the 2015 NFL draft were Florida State quarterback Jameis Winston, who went to the Tampa Bay Buccaneers, and Oregon quarterback Marcus Mariota, who went to the Tennesse Titans. Winston appears to be more NFL-ready according to many scouts, while Mariota may be the more athletic of the two. So who do NFL odds say is going to have the better season? Let’s find out.

At Oregon, Mariota used an offense that had its reads predetermined, and so he faces more of a learning curve in the NFL. Oregon’s offense doesn’t require the quarterback to make the adjustments before the snap that Florida State does, so Mariota will have to show that he knows how to learn and run reads at the NFL, while making adjustments before the snap and figuring out route combinations. There’s nothing suggesting Mariota can’t do this, but he hasn’t had to do it yet. Winston has run a more pro-style offense at Florida State and had to anticipate rushes and coverages more often that Mariota. His film from 2013 and 2014 shows a solid ability of doing this. Decision-making is still an area of concern for Winston, but he’s ahead of most rookie quarterbacks in recent years with the exception of Andrew Luck. 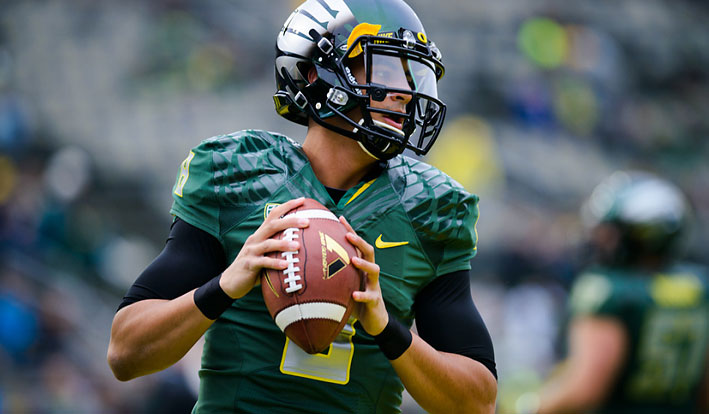 Mariota sets his feet under balance and control, getting speed on the ball from the lower half of his body. When he’s scrambling, he keeps his shoulders square to the line of scrimmage, remaining on top of a poised lower half. His release point and body type offer a fluid motion and quick release, and his natural athleticism is a plus. Winston’s fundamentals are a concern. He has worked on his release since 2013, but it’s still a possible sore point. He drops the ball below his shoulder, particularly when throwing on the run. His balls have a way of drifting to the right, making it tough to place touch passes and throws outside the hash marks. Winston can run, but he’s not at the level of an NFL mobile passer.

From the pocket, Mariota can put enough velocity to power interior throws, short-area timing routes and vertical edge passes. He has the arm strength across the field and control on velocity to beat zone defenses, but his major issues concern vertical accuracy on throws outside the hash and adjusting his footwork to accommodate secondary reads and putting a clean spin on an accurate throw. Winston’s arm strength poses similar issues. In the pocket, his velocity is well above average, and he can generate strength even when on the run. His short and mid-field throws are highly accurate. He can fit throws into small windows. However, timing and release point remain issues. 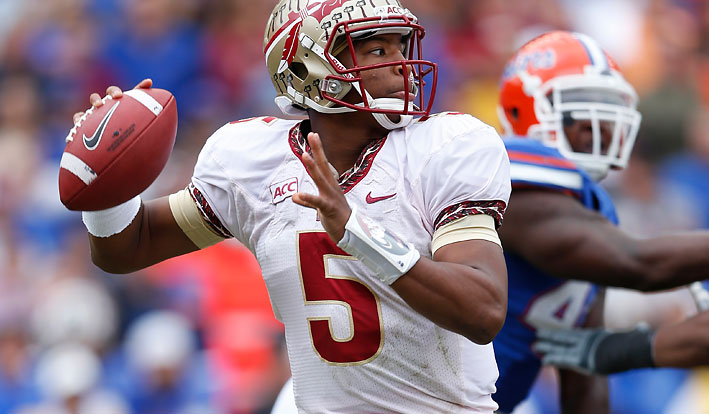 This type of evaluation looks at anticipation, decision-making and progressions. Mariota’s lack of experience with pro-style offenses also comes into play here, because we still don’t know if he’s just a spot thrower. He does show ability in half-field progressions, using his eyes to move safeties. However, his route break instincts and decision-making speed are still areas of concern. Winston’s anticipation, in contrast, is elite. He has confidence with multiple reads, and if he can bring more composure to his reads, he should have success even in his first season.

Going into the 2015 season, it looks as though Jameis Winston is more game-ready, which means his learning curve will be smaller, and he’ll have more success early on – depending on what the rest of the team can put together. However, issues off the field and with fundamentals really make this a close call.   Sources NFL.com (http://www.nfl.com/player/andrewluck/2533031/careerstats) SI.com (http://www.si.com/nfl/2015/05/06/2015-nfl-season-afc-projected-division-standings)
Older post
Newer post