NFL News and Rumors
Free agency and the NFL draft have changed the landscape of the world of NFL betting, as each season, there are new teams that make it to the postseason. In the AFC, there are 16 teams, but only six make the playoff. Based on the teams’ offseason drafts, free agent signings and the overall strength of their rosters and schedule, here are the AFC teams that are likely to reward you in the NFL odds to reach the 2015/16 NFC playoffs.

During Andrews Luck’s third year with the team, the Colts made it to the AFC Championship, only to be blown out by the Patriots 45-7, who went on to winning the Super Bowl XLIX, albeit the Deflategate Scandal. In hindsight, the Colts found out that their running game had dangerously deteriorated and cost them a number of key players. To solve that problem, the Colts signed veteran RB Frank Gore, who is bound to bring in some balance in the attack and improve their running game.And to give Luck more options in the offense, the Colts added rookie Philip Dorsett, who alongside T.Y. Hilton, Andre Johnson and Colby Fleener, will tremendously help the already-good Colts offense to improve and rank among the best in 2015. Added to the solid defensive pieces they added through the draft and free agency, and the manageable nature of competition in the AFC South, the Colts are highly likely to finish the regular season with the best AFC record, as they win the AFC South title and clinch the No. 1 conference playoff seed in the process.

The Patriots have won four Super Bowl titles and boast of having one of the best QBs in the game in Tom Brady, so expecting them not to succeed in 2015 would be a waste of your time. Of course, the loss of Vince Wilfork and Darrelle Revis, along with the repercussions of the never-ending Deflategate scandal, will make the road to success bumpier than in 2014. However, New England is still loaded with talent on both sides of the ball, so even in Brady’s absence, backup QB Jimmy Garoppolo, the young star duo of Logan Ryan and the Super Bowl hero Malcolm Butler should be capable of carrying on the legacy of the team. And when Brady returns, normalcy should resume, giving the Pats a chance to stifle their way into a tight claim of the AFC East title.

Despite his advanced age, currently estimated at 39 (he looks older than that, doesn’t he?), Peyton Manning is still as lethal as ever, which was affirmed when he threw for 39 TDs with 4,727 yards last season. At the beginning of last season, Manning got an injury that ruined what was a great season for the Broncos. This year, Manning’s health is again an issue and the team is yet to confirm his full fitness. Additionally, the departure of veteran WR Wes Welker and TE Julius Thomas could have some slight negative impact on the team. Nevertheless, the overall offensive strength of Denver will remain pretty much intact, if not get better, thanks to the presence of new head coach and offensive maestro Gary Kubiak. Moreover, Denver had a strong defense last season, which they can rely on again this year. With Chris Harris Jr, Von Miller and Demarcus Ware in the defensive line, the Broncos will remain Super Bowl contenders, beating the Chargers and Chiefs to claim the AFC West title

The Ravens nearly defeated the Patriots in the division al round of 2014-15 season playoffs, but could not stand the heat through the four quarters of the game. With QB Joe Flacco’s leading the attack, the offense remained relevant for the most part of 2014 and 2015 should remain the same, as Flacco maintains most of his targets. Meanwhile, rising star linebacker C.J. Mosley and veterans Elvis Dumervil and Terrell Suggs are likely to shore up the Ravens’ defensive line and offer the team a better chance at finishing off opponents in a better way. If the secondary can perform better, winning the AFC North title should be possible, considering Baltimore’s biggest divisional competitors, the Steelers and Bengals, have the two toughest strength of schedules in the league in 2015. 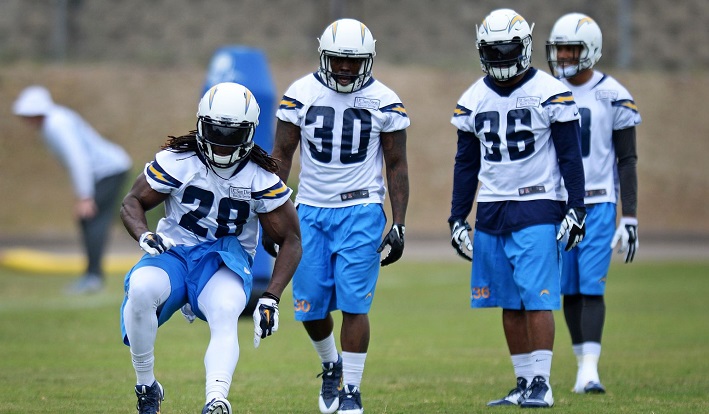 After upsetting the Bengals and comfortably making it to the playoffs in 2013, the Chargers finished second in AFC West tied with the Chiefs at replica 9-7-0 records, as they narrowly missed the playoffs last season. As QB Philip Rivers is nearing the end of his career with the Chargers, it will be an important season for him to prove himself in the league, a key factor that is likely to motivate him for a solid showing. Plus, the Chargers played well against some of the top opponents in AFC last year, and if their solid roster is anything to go by, they look to repeat the same performance this season. Most notably, the NFL offensive rookie of the year favorite, Melvin Gordon, should provide a powerful running game for San Diego, as the team charges for a playoff berth this year.

Steelers QB Ben Roethlisberger had one of his best seasons last year, throwing 12 TDs in two games at one point during the season and finishing the year with a good number of career-highs. A solid performance from Big Ben can thus be expected one again in 2015, mainly because the Steelers have best RB-WR combination in the league in Le’Veon Bell and Antonio Brown. On any given day, the trio of Roethlisberger, Bell and Brown will be a handful to even the best of defensive units in the league, something that should propel the Steelers to success. Even so, the loss of Troy Polomalu could have some regressive effect on the secondary (within the field) and leadership-wise (outside the field). Plus, as earlier mentioned, the Steelers have the toughest schedule in 2015, so even with their solid offense, it doesn’t look like winning the AFC North for the second-year running will be possible.Sources:Wikipedia.org (https://en.wikipedia.org/wiki/Andre_Johnson)NFL.com (http://www.nfl.com/player/benroethlisberger/2506109/profile)
Older post
Newer post