NFL News and Rumors
It’s a sad day for NFL fans, as the season is now officially done and dusted. If there is any solace to be taken in this, it has to be that we were treated to one final great game before all was said and done. The New England Patriots have bragging rights for the year, but it could all have been very different were it not for a single play call at the very end.If it wasn’t for the play of the Seahawks defense, this thing could have been over at the half. Despite being totally outplayed, Seattle somehow managed to find a way to get to the half-time break tied at 14. With adjustments obviously made, they came out in the second half to score 10 unanswered points to take a lead that really didn’t look to be in a whole lot of danger. Tom Brady was not to be denied, though, as he spent the majority of his time on offense threading the ball into the small holes that he was given. Brady eventually amassed 324 yards, 4 TD’s, and the MVP trophy, and all while also throwing a pair of crucial INT’s.As great as Brady was, this is a performance that really should have been in a losing cause. Down by 4, and with time running out, Russell Wilson led his Seahawks down the field and onto the 1-yard line. There was even a horrible David Tyree moment for the Patriots, as Jermaine Kearse somehow pulled in a 33-yard pass after juggling the ball off a knee, an elbow, and seemingly every other body part as he lay on the ground. With the ball on the 1, the next play for the Seahawks should have been a no-brainer: hand the ball to Marshawn Lynch (who had already topped 100-yards on the ground) and let him pound it in. Inexplicably, Carroll call a passing play that was picked in the end zone by undrafted rookie Michael Butler. Seattle then went offside, with the Pats facing a potential safety situation, and then started a brawl on the next play. A truly inauspicious way for the champions to relinquish the crown. 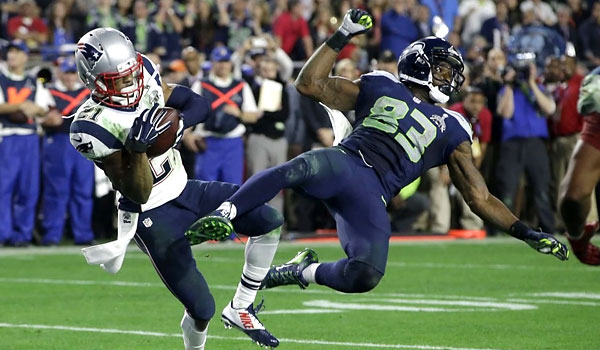 All of that said, the Seahawks should have repeated, so it’s no real surprise that Vegas’s Super Bowl predictions have them pegged as favorites (5/1) for the 2016 Super Bowl. Rounding out the top 3 favorites for next year are the Patriots (6/1) and the Packers (7/1). Denver are next up at 8/1, which is strange given the fact that there is a lot of uncertainty over where they are headed. Dallas look a decent bet at 12/1, assuming that they can get everyone re-signed. The one that jumps out to me is the Indianapolis Colts at 16/1. If they can land a quality running back, look out.
Older post
Newer post