NFL News and Rumors
Over the years, there have been some great quarterback and wide receiver tandems that have put up a lot of big numbers, and some that were able to beat the NFL odds and win the Super Bowl. Tandems like Peyton Manning and Marvin Harrison, who hold the record for the most touchdowns from a quarterback to a receiver, and Steve Young and Jerry Rice, the previous record holders, are just a couple of examples. With the new rules favoring quarterbacks and receivers, the record is likely going to be broken by another duo soon, so we have decided to take a look at some of the most dangerous quarterback and wide receiver tandems in the NFL today.

Both players were drafted by the Bengals in 2011, and from the first game of the season, they had become a very dangerous duo. Since the start of the 2011 season, Green has become one of the best offensive weapons in the NFL, and with Andy Dalton behind center, he has over 4,000 yards and 30 touchdowns. If the two of them remain healthy and on the same team for their whole career, they have a chance to be one of the greatest quarterback and receiver duos.

They are currently the most successful active pair in the NFL today, and since 2006, they have combined for over 9,000 yards and 68 touchdowns. The two of them put up some big numbers in nine seasons together, but Colston’s production has declined a bit, and they have combined for 10 touchdowns in the last two seasons. Despite the slight drop, they are still a very dangerous tandem, and still have some years of solid production left.

Julio Jones is another member of the 2011 draft class, and he has become one of the best receivers in the NFL. Despite playing alongside another Pro Bowl receiver, Jones has put up a lot of impressive numbers, thanks to his quarterback Matt Ryan. In three full seasons, they have combined for over 3,700 yards and 24 touchdowns. Both players are still very young, and will definitely put up bigger numbers if they can stay healthy and remain on the same team.

It took a few years for Jordy Nelson to get a chance to prove that he was a very good receiver, but once he got an opportunity to do so, he took advantage of it. Since Nelson became a full time starter in 2011, he has over 4,800 yards and 43 touchdowns, most of which came from Aaron Rodgers. Last season, he finished with 13 touchdowns, which was the second most by a receiver, despite the fact that Randall Cobb, the other starting Green Bay receiver finished with 12 touchdowns. Right now, Nelson is still 30 years old, while Rodgers is 31, so they can still put up some big numbers and make a run for the record, if they remain healthy.

The Dallas Cowboys thought Dez Bryant was going to be a special player when they drafted him, and he has certainly lived up to the expectations, and is currently one of the best receivers in the league. He has also been fortunate to be paired with Tony Romo, and the two have formed a very formidable tandem in their time together. In their first year together, Romo missed 10 games due to an injury, and Bryant missed four, finishing the season with 561 yards and 6 touchdowns. After that season, they have both been able to remain relatively healthy, and their numbers show just how good they have been in those years. They have combined for over 5,000 yards and 50 touchdowns, making them one of the most dangerous tandems in the league. 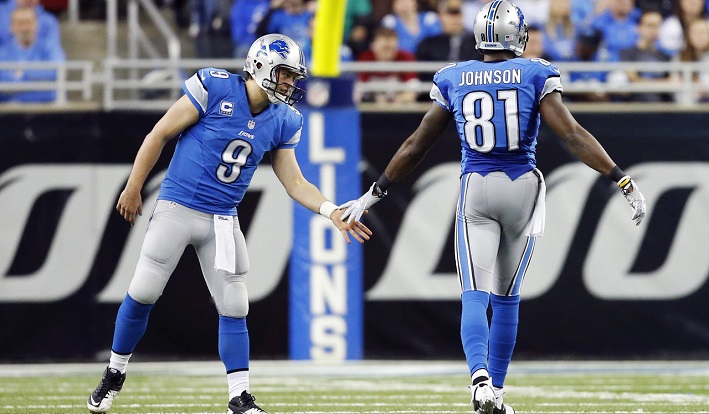 Calvin Johnson is widely considered to be the best receiver in the NFL, and for good reason. Since he came into the league, he has put up some very big numbers, particularly in 2012, which he finished with 1,964 receiving yards, which set a new NFL record. Johnson was drafted in 2007, and he put up some solid numbers from the very beginning. In 2009, he was paired with Matthew Stafford, and they soon became the stars of one of the best offenses in the NFL. In their time together, the two have combined for over 8,000 yards, and 58 touchdowns, and with both players still in their 20s, they have a legitimate chance to break Peyton Manning and Marvin Harrison’s record. Sources: Wikipedia.org (https://en.wikipedia.org/wiki/Matt_Ryan) NFL.com (http://www.nfl.com/player/dezbryant/497278/profile)
Older post
Newer post