NFL News and Rumors
The last time the Indianapolis Colts meet the New England Patriots was earlier this year in the playoff match prior to the Super Bowl XLIX Game. The duel was largely one-sided, as the Patriots rode on the Colts like lords, displaying their top notch grade with stellar offense and mean defense. Besides a second-quarter interception that led to touchdown drive, the Colts moved as if they were tethered to a tree. Not even the rainy conditions in the game dampened the New England spirits, as the Patriots dominated the game, including an emphatic 35-0 run over Indy. In the end, there could only be one winner, with the Pats getting honor of being crowned champions of the AFC. After the game, it emerged that the Patriots had somehow cheated earlier in the game, using deflated balls to favor QB Tom Brady. The scandal, commonly dubbed the Deflategate scandal, led to a lot of criticism, with a commission established by the NFL to look into the issue. Brady, a number of New England associates and the Patriots (as a team) were found complicit of involvement in the scandal, with Brady earning a four-game suspension and the Patriots also receiving some fines and penalties. Despite the Deflategate Scandal, it would be hard to say that the Colts were beaten because of it, as Indianapolis was clearly the second-best team that day and deserved the loss in the NFL betting odds. Plus, with both teams still looking as the best franchises in the AFC Conference, there is no doubt that their rivalry is likely to continue in if (and when) they meet in 2015, which will give us a chance to know who among them is truly the best.

Colts vs. Patriots Rivalry at a Glance

The rivalry between the two teams is among the newest in the NFL. It was majorly driven by the rivalry between quarterbacks Peyton Manning (in his time as Indy QB) and Brady, and although the two teams have become fierce rivals in recent times, the rivalry only became prominent after Colts moved to the AFC South. Since 2003, the two teams have been out for each other’s skin, with the Patriots owning the early duels of the series. They beat the Colts in six straight matches, including the 2003 AFC Championship game and a 2004 AFC Divisional game. Thirsty for revenge with an improved squad, the Colts responded with three straight wins. The three wins came in the form oftwo regular season victories and a win in the 2006 AFC Championship game, trampling on the Patriots ego in the process. The Pats have since bounced back, winning the majority of their recent meetings. For example, in 2014, the 7-2 Patriots were hosted by a 6-3 Colts at the Lucas Oil Stadium. The result was a world class performance by Jonas Gray, who racked up four touchdowns, helping New England to a comfortable 42-20 triumph over the Colts. To confirm their dominance over their bitter rivals, they followed this by thrashing them 45-7 in the AFC Championship Game. So, for now, it is safe to say that the Patriots currently rule the rivalry. 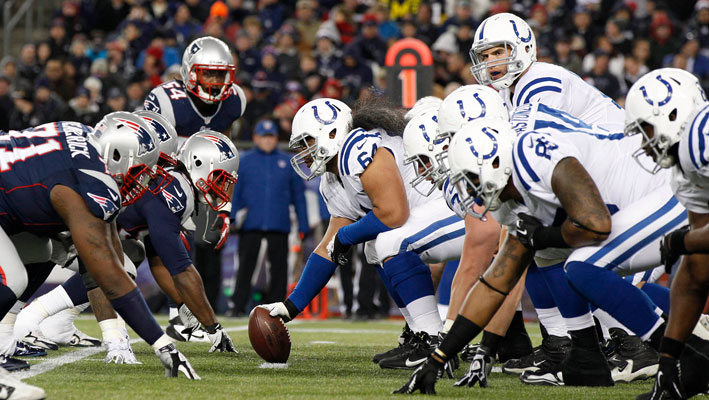 A few players stood out for the Patriots in their last match against the Colts. Brady showed a solid display on the greasy rainy pitch, managing 23-of-35 passing for 226 yards, three touchdowns and one interception. However, as with the match before that between the two teams, it was the running game that carried the day, as LeGarrette Blount broughtthe Colts to their knees with 148 yards and three touchdowns on 30 carries. Managing to run and pass efficiently ensured thePatriots enjoyed time of possession from 37:49 to 22:11. Besides working on their defense, the greatest need for the Colts to beat the Patriots this season is an improved passing game, as this is where the battle was lost in 2014. Their receivers struggled to break open and hold onto the ball last season, something that needs to be sorted out. Also, Andrew Luck will need to use his big arms more efficiently to keep the ball away from the marauding Patriots. 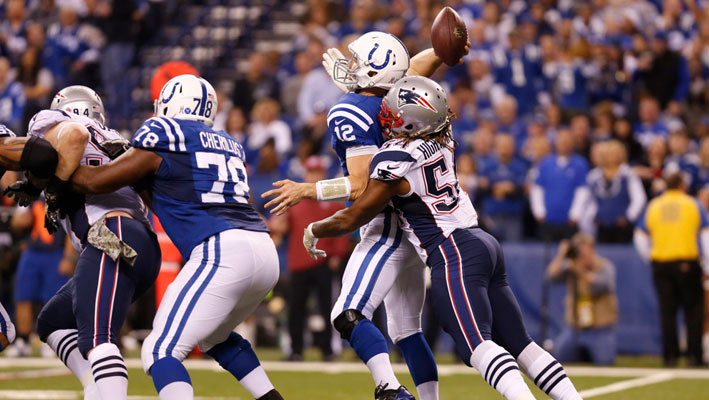 Though they underwhelmed last season, it is not all bad news for the Colts, who have a good number of assets on their side. Outside Luck, the Colts have a good WR in T.Y. Hilton, who recorded an impressive third-down catch for a 36-yard in the last meeting. Also, after signing a new wide receiver in Andre Johnson, the Coltscan be hopeful of their ambitions to improve their passing game. Johnson ranks second All-time in NFL history in receiving yards per game (80.4), only behind Calvin Johnson (83.0). He is also the holder of the most of receiving records in Houston, which he earned during his lengthy career with the Houston Texans. The team also reinforced their depth, adding Duron Carter and drafting Phillip Dorsett. In addition, the Colts made other good signings, including LB Justin Shirk, DT Jeris Pendleton, RB Abou Toure and veteran workhorse Frank Gore. On the flipside, the Patriots signed backup quarterback Matthew Flyn, who brings in more experience to the team. Hving played for Green Bay Packers, Seattle Seahawks, Oakland Raiders, and Buffalo Bills, he offers more options to the Patriots. They team also drafted Malcom Brown to offer further depth in the defense. Other notable offseason additions in New England include D.J. Lynch, and TEs and Logan Stokes,

If these two meet in 2015 season, two things will make a difference on the NFL betting odds: the performance of the new signings and the team with the desire to win. This is because both teams have a lot of talent, with the Colts particularly looking deeper and wider after a busy offseason, setting up the stage for an enthralling encounter.   Sources: ESPN.com: http://espn.go.com/nfl/player/stats/_/id/14874/andrew-luck NFL.com: http://www.nfl.com/teams/oaklandraiders/profile?team=OAK
Older post
Newer post