NFL News and Rumors
Russell Wilson and the Seattle Seahawks (12-4 SU, 9-6-1 ATS, 8-8 O/U) will look to reach their third consecutive Super Bowl appearance once the 2015 season gets underway in earnest and they’ll have plenty of motivation after falling just short of repeating as league champs.Thanks to this expert NFL betting breakdown on the Seahawks and their chances of cashing in on their NFL Super Bowl 50 Odds, you’ll have a great idea of just how far the Seahawks will go as they look to build on the league history they’re seemingly making each and every season these days.

While the Seahawks are still likely kicking themselves for their failure to win Super Bowl 49, they had a lot of good tings happen in 2014 and a lot to look forward to heading into 2015.Let’s start with Seattle’s offense. The Seahawks finished ninth in total offense, including first in rushing (172.6 ypg) and 10th in scoring (24.6 ypg). Pro Bowl running back Marshawn Lynch finished fourth in rushing with 1,306 yards while leading the entire NFL in touchdowns with 17.Seattle also fielded another powerful defense that finished first in total defense (267.1 ypg), first against the pass (185.6 ypg) and third against the run (81.5 ypg) while limiting their opponents to a league-low 15.9 points per game.Inside linebacker Bobby Wagner and cornerback Richard Sherman both earned Pro Bowl berths, although Seattle has at least six Pro Bowl caliber players on defense in my estimation.

While quarterback Russell Wilson maintained his status as arguably the game’s best young quarterback, Seattle finished a dismal 28th in passing while failing to see a single wide receiver reach the 1,000-yard plateau.

That interception Wilson threw against New England in Super Bowl 49 was one of the ‘ugliest’ plays I have ever seen in my life. No matter how many times head coach Pete Carroll or Wilson try to explain that call, I remain unconvinced that the call was anything but foolish. Let’s take a look at Seattle’s statistics from this past season.

Doug Baldwin is a very good wide receiver, but he’s not very big and I believe he’s clearly better suited to being a No. 2 receiver than a flat-out No. 1.2014 No. 1 draft pick Paul Richardson didn’t have a bad rookie season, but it wasn’t what Seattle was hoping for, even from a rookie. Still, Richardson is talented and young and could have a chance to be a No.1 at some point in the future.However, if ‘if was a fifth’ we’d all be drunk.Seattle can’t wait another season or two for Richardson to develop into something he may or may not ever become when they’re a legitimate Super Bowl contender that needs more balance with its offense.Starting wide receiver Jermaine Keasre is a lot like Baldwin in the fact that he’s pretty good, but not very big at all and far more suited to be a No. 2 or No. 3 than an actual starter.Seattle really needs a big-boded receiver that can go after the ball and win battles like the one Seattle needed to win Super Bowl 49.

Russell Okung and Max Unger are fixtures and Justin Britt was very solid as well, However, I think James Carpenter needs to be replaced at right guard.

Veteran defensive end Kevin Williams is now 34-years-old and although he is a five-time All-Pro who had a fine season in 2014, I’m not sure that Seattle brings him back, but even if they do, I think the Seahawks will look to groom a younger replacement as depth alongside nose tackle Brandon Mebane.

I know defensive coordinator Dan Quinn is gone after bolting to take the head coaching job in Atlanta, but I fully believe that Seattle won’t suffer any drop-off defensively under former defensive backs coach and new coordinator Kris Richard.I also believe that Russell Wilson is still improving and that Seattle can improve a lot offensively in 2015 by adding a quality receiver or two.If the Seahawks take care of business this offseason with their own free agents like Michael Bennett and Cliff Avril and can successfully find a handful of significant rookies via the draft, they’ll not only contend to make their third straight Super Bowl appearance, but that they actually will.

With Wilson set to sign a new deal and Marshawn Lynch reportedly being offered a sweet deal, the Seahawks should have harmony in the locker room. Seattle will also have plenty of motivation after their crushing loss in Super Bowl 49 and I think they’re in line for an NFC Championship game appearance at the very least. 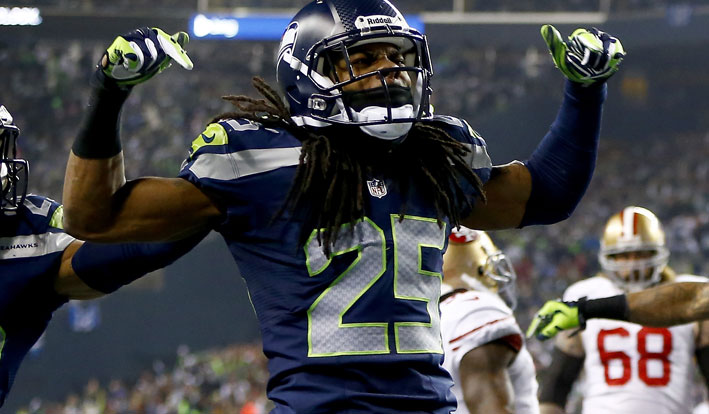 Seattle will likely lose starting cornerback Byron Maxwell in free agency, but the Seahawks have done well in finding talent that can replace any departing star.With the fourth toughest schedule in the league in 2015 (142-112-2, .559), the Seahawks will undoubtedly have a tough way to go in cashing in on their Super Bowl Futures Odds, but I believe this team is built for sustained success, particularly with a trio of superstars like Russell Wilson, Marshawn Lynch and Richard Sherman holding all of their teammates accountable.I think the Seahawks are looking at a minimum of 11 or 12 wins in 2015 as I expect both, Arizona and San Francisco to take slight steps backwards in the NFC West. The Seahawks have finished in the top 10 in ATS victories in each of the last three seasons, including eighth this past season and tied for first in both, 2012 and 2013 with identical 11-5 ATS records and I like them to do so again in 2015.