NFL News and Rumors
There is a new sheriff in Buffalo, and his name is not Doug Marrone. He played football as defensive end in Southwestern Oklahoma, a duty he performed with gusto, earning himself an indictment in the University’s Hall of Fame. In part, that explains why most of the teams he’s coached are known for their strong defensive capabilities… I guess it’s true that old habits die hard! And speaking of old, he is aged 52, but lives his life like a 20 year old. Upon signing for the Bills, he got a new tattoo to clearly spell his love and commitment to his new job.What about his coaching exploits? Good question indeed… After serving as an assistant coach for 22 years in various high-profile college and professional teams, he landed his first head coaching gig with the Jets in 2009. And true to his boisterous and larger-than-life attitude, he promised the Jets success. With all eyes set on him, he punctuated his talks by delivering success from the very first year, as he led the team to the AFC Championship game in 2009, a feat he confirmed in the following year by leading the New Yorkers to another conference title game in 2010.And now, he is hoping to bring the same success in Buffalo, indicating that we should expect to see the Bills in the 2015-16 NFL playoffs. His name, as sportsbetting fans probably guessed by now, is Rex Ryan!!! Can Ryan, the new head coach in Buffalo since being offered a contract in January 2015, live up to his hyped up status as the man to take the Bills to higher levels of success?

THE TASK AT HAND FOR RYAN

Well, for starters, you should note that Ryan is taking over a Buffalo team that is coming off one of the most positive seasons in their recent history, finishing the season on a 9-7 mark, their first winning record in 10 years. The useful pieces, scattered as they are all over the place, are there. All that Ryan needs is to get his house in order, find the right combinations, and sooner rather than later, we will be talking about Buffalo as one of the great teams in the league.Of course, it is not going to be an easy job for Ryan in 2015, as the AFC East is looking dangerously competitive, with the New England Patriots being the undisputed kings of the division, the Miami Dolphins making some scary offseason additions to their unit, and the New York Jets also looking to be on the come-up, thanks to the strong foundation he built there. 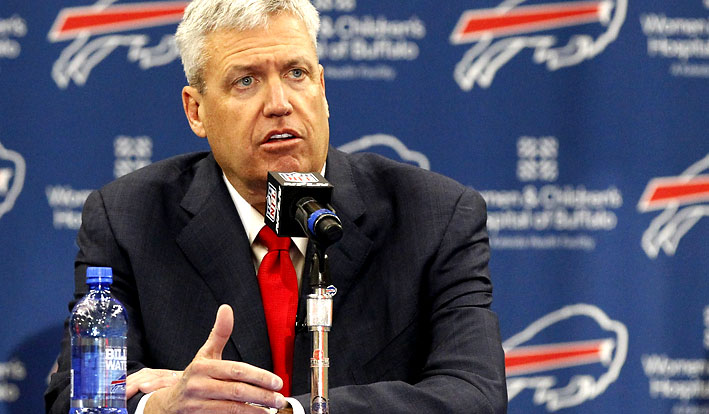 Making matters complicated for him, the Bills have the longest active NFL playoff drought, missing out on the postseason games since 1999. The majority of the current Buffalo team therefore doesn’t know how to play in the playoffs or even qualify for it.Still, Ryan believes that his Buffalo team can make it this season’s playoffs. “I think we will,” said the coach. “Yep, I think we will.”However, the Ardmore, Oklahoma native was keen to throw caution in the expectations about the upcoming season and a guarantee to make the cut for the postseason games.“I’m not going to say it’s a guarantee,” commented Ryan. “But I guarantee you one thing: Teams aren’t going to want to play us. I can tell you that much.”Considering he had guaranteed to take the Jets to the Super Bowl, a feat he failed accomplished in his six seasons in New York, it makes sense that Ryan is choosing to be more cautious with his words this time round.

THE WAY FORWARD FOR RYAN AND THE BILLS

The biggest concern for him will especially come in the quarterback department where QBs Matt Cassel and E.J. Manuel are the top contenders for the starting role. Both quarterbacks have showed signs of brilliance in their careers, but none of them has the reliable skills to be termed as franchise quarterbacks.“Obviously, it’s not an ideal situation, or there would already be one guy there (as the starter),” commented Ryan on the quarterback situation. “But we have enough talent there that I’m confident that when it’s all said and done, we’ll be fine.” 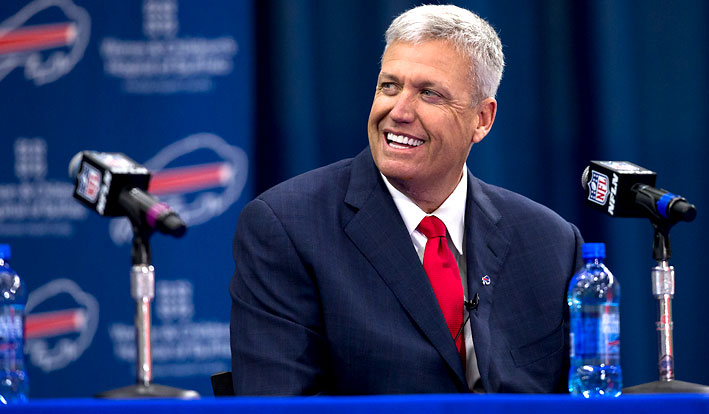 Certainly, when all is said and done, the Bills should be fine, especially because they finished 2014 with one of the best defensive units in the country. According to Football Outsiders, the Bills had the second-best defensive efficiency in the league in 2014, while ESPN ranked Buffalo at No. 4 in NFL’s best team total defenses from last year. With Ryan known to be a strong defense guru, the Bills have the potential of even becoming the best overall defensive unit in the nation. Case-and-point, eight of nine defenses Ryan has led since 2006 have finished in the top 10 in total defense. Bearing in mind that the Seattle Seahawks haven’t been very solid offensively (more so in passing), but have been able to choke down opponents through their throttling defense, the Bills could equally use the same tactic and hopefully win enough games to take them to the playoffs and beyond.Still using the Seahawks as an example, the team in Seattle has made it to back-to-back Super Bowl games by focusing more on running the ball, using journeyman QB Russell Wilson and RB Marshawn Lynch to run the ball than pass it, and it has worked admirably well for them. The Bills could equally tailor their game such that they are able to use their backfield in getting things going in the offense. This should be particularly possible now that the Bills signed one of the best running backs in the league in LeSean McCoy and stole Greg Roman from San Francisco to become the offensive coordinator in Buffalo. Roman spent his last four seasons with the Niners as their offensive coordinator, helping the 49ers advance through seven playoffs rounds—including a 2012 trip to Super Bowl XLVII.And above everything else, Ryan knows the ins and outs of the AFC East division because of his long tenure with the Jets, which has included years of observing the strengths and weaknesses of Buffalo and other teams in the division. Finding ways of strengthening Buffalo while capitalizing on his opponents’ mistakes should thus be very possible and make him an easy fit for the Bills.Not to forget, the Bills have a solid coaching unit, including six assistant coaches who were hired in January. Ryan should thus have much-needed support, particularly on the offensive side of things where his skills haven’t been stellar.SourcesBuffaloBills.com (http://www.buffalobills.com/news/article-1/Bills-hire-six-new-assistant-coaches-retain-four/883027ee-3980-47a8-818a-0cbee93638c9)ESPN.com (http://espn.go.com/nfl/player/_/id/8644/matt-cassel)
Older post
Newer post