With time running out on the legendary career of sure-fire Hall of Fame quarterback Peyton Manning, one main question surrounds the Denver Broncos (12-4 SU, 8-8 ATS, 10-6 O/U) as they get set for the 2015 NFL regular season. Can they make one more legitimate challenge for conference and league supremacy after falling just short two years ago and getting unceremoniously bounced out of the playoffs last season? Thanks to this expert betting breakdown on the Broncos chances of cashing in on their Super Bowl Odds, you’re going to find out whether the Broncos have what it takes to get Manning his second career Super Bowl championship or whether Denver is masquerading as a legitimate AFC title contender. 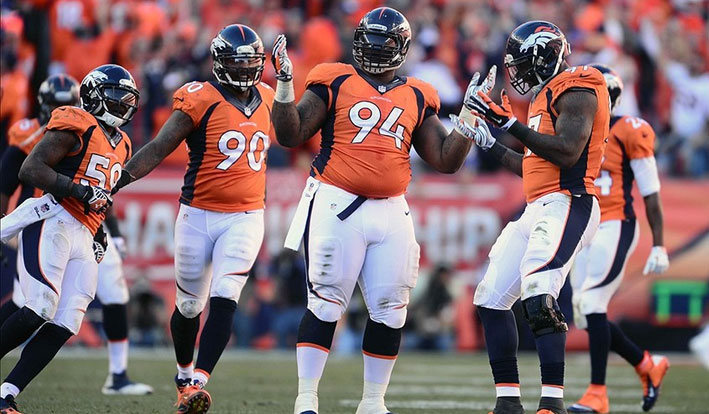 In spite of their postseason flameout, there was plenty of ‘good’ for the Broncos last season. The Broncos finished fourth in total offense (402.9 ypg), fourth in passing (291.3 ypg), and a stellar second in scoring (30.1 ppg). Manning ranked fourth in the league in passing (4,727 yards) while wide receiver Demaryius Thomas finished second in the league in catches and receiving yards (111 rec, 1,619) while fellow wideout Emmanuel Sanders finished third in receptions (101),  and fifth in receiving yards (1,404). Running back C.J. Anderson also had a solid season in finishing 16th in rushing with 849 yards and an impressive 4.7 yards-per-carry average and hey, Manning won double-digit games for the 14th time in his 17-year career. 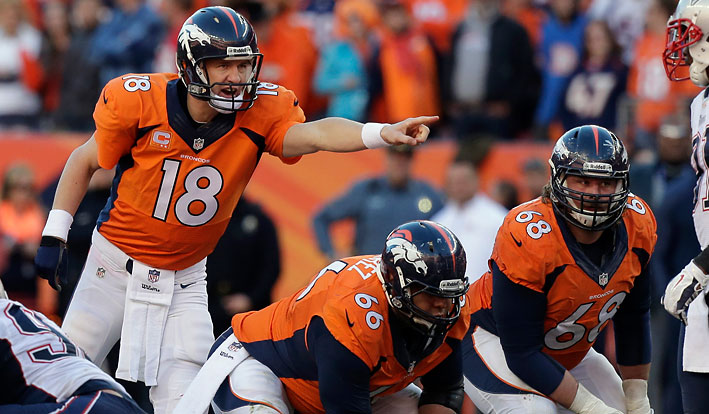 Along with all of their good, the Broncos also failed in other areas, as their postseason collapse would suggest. Denver needed better balance on offense as they ranked 15th in rushing and their defense gave up 22.1 points per game to finish 16th.

Denver’s postseason pounding wasn’t the only ugly thing the Broncos experienced last season. No…Manning’s play was noticeably ‘ugly’ over the final few weeks of the regular season and in their 24-13 playoff loss to Indianapolis. While I suspected that Manning was injured and we all now know that he was, the noticeable drop-off was a disturbing signal that the end is near for the sure-fire Hall of Famer – and that Denver had better ramp up its efforts even more to win a Super Bowl in 2015. 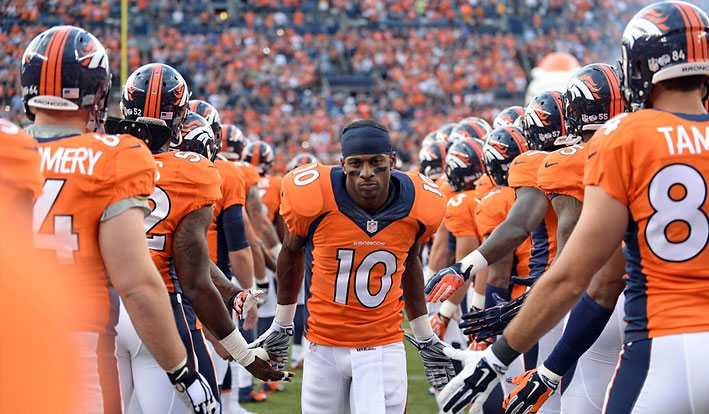 Let’s take a look at Denver’s offensive statistics from this past season.

Here is a look at Denver’s team defensive statistics. 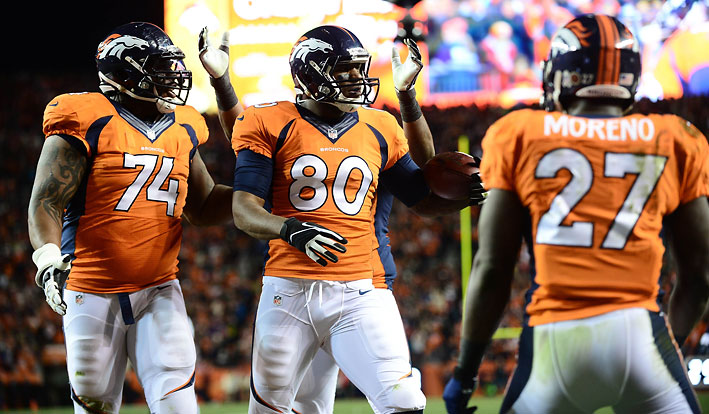 I don’t think the Broncos have any real ‘high needs’ they need to address although they do need a little bit of makeup for their slight blemishes.

With the Broncos changing their style of play up front from a power blocking scheme to a zone blocking one, then one or more of the starters on their offensive line could change teams. The bottom line here is that Denver needs to keep the immobile Manning upright and injury-free as much as possible so adding more quality depth to the offensive line is definitely a smart idea. The most pressing need is for Manning to stay healthy for 16 games, channeling the MVP form he showed through October of last season. It will be interesting to see if Kubiak and Dennison tinker with the offensive line, moving from a power scheme to a lighter, quicker unit more suited to the zone-blocking scheme. 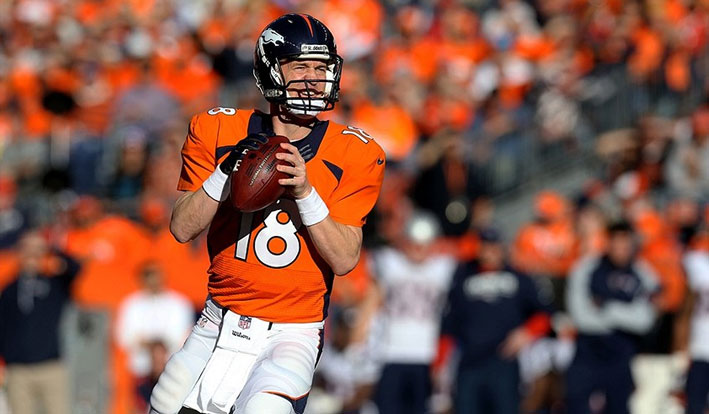 Starting nose tackle Terrence Knighton looks like he’s going to bolt for a bigger payday, likely to division rival Oakland. The Broncos will need to replace their run-stuffing stud if that happens. An amazing fact about Knighton’s career is the fact that he’s played every season of his career under new Raiders head coach Jack Del Rio.

If Julius Thomas leaves, Denver will need to nab a tight end that can come in and contribute right away. Even if Thomas stays, which I think is what will happen, I suspect the Broncos could still grab a veteran backup in free agency. 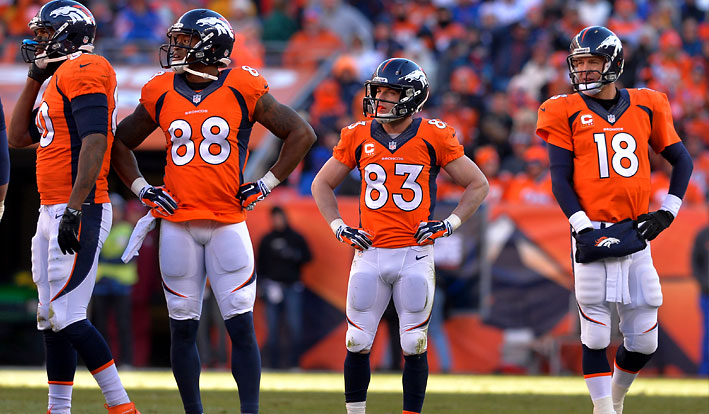 The Broncos decided to make some significant changes following their playoff loss to Indianapolis, starting with the ‘mutual’ parting of ways with head coach John Fox. In spite of Fox’s impressive 46-18 record over four years with the Broncos, general manager John Elway made the move to replace him and I believe it was the right time, although I think Fox is an excellent head coach. Fox’s departure opened the door for Elway’s former backup and former head coach of the Houston Texans, Gary Kubiak to come in and help make Denver’s offense even more explosive – and more balanced. However, that wasn’t the only significant coaching change Denver made.

Kubiak brought in respected offensive line coach Rick Dennison to run his offense and widely-respected defensive genius Wade Phillips to take over a defense that was good, but never as great as its collective talent. 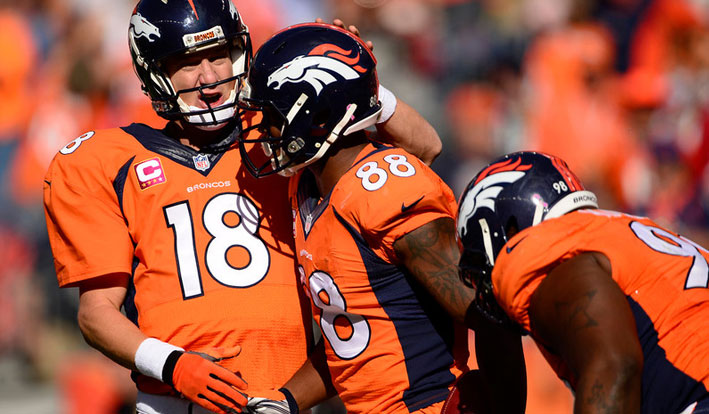 Phillips and Kubiak enjoyed plenty of success with the Texans a few years back and Phillips’ affinity for a 3-4 defense will play to the strengths of elite pass rushers, Von Miller and DeMarcus Ware.  Having said all of this, let me also say that I like Denver’s chances of winning the AFC West next season and getting back into prime position to win the AFC Championship as well.  The Broncos will have the 10th strongest schedule in the league next season as they face a gamut of teams that went a combined 138-117-1 in 2014 (.541). Again though, I like the Broncos to reach double digits in wins and really challenge for a spot in Super Bowl 50. I’m going with 11 SU wins for the Denver Broncos in 2015 while putting together an ATS record that ends up right around the .500 mark they compiled in 2014. Bank on the offensively-explosive Broncos to once again, be one of the top ‘Over’ teams in the league in 2015.
Older post
Newer post