NFL News and Rumors
If you’re new to the game of NFL football – and the multitude of bankroll-boosting opportunities it brings each and every year – and you’d like to know more about the vast terminology used in today’s National Football League, then you’re in luck! Thanks to this mash-up of NFL betting jargon, you’re going to learn more about the sport and it’s mostly age-old language, than ever before.

Most everyone knows that a football field is 100 yards long. But Did You Know that it is also 53 yards and one-foot wide? The end zones are 10 yards deep. Yard markings, called hash marks cover the field to enable players, officials and fans to judge distances and ball spot locations, etc.

Backup – A backup is simply a reserve or substitute player.Black Monday – The Monday following the last regular season game of the year, when many coaches in today’s times get the ax.

Down – A down is a single play. Teams get four downs to attempt to gain 10 yards and another first down.

Fullback – A fullback is the blocking back for the featured running back. Generally fullbacks are heavier and stronger than their ball-carrying counterparts, who are known as halfbacks.Formation – A formation is simply the alignment of offensive and defensive players on a given play.Fumble – A fumble is when a player loses possession of the ball. It can be costly to a team – and player.Free agent – This term is used more today than ever before and simply means that a player in under contract with no team and can sing a contract with any team he chooses. 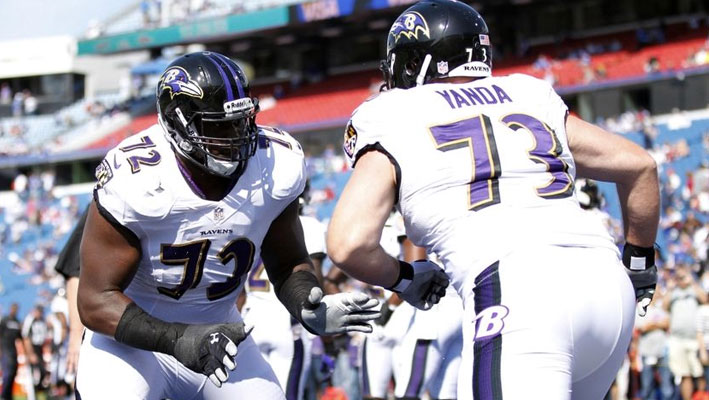 Guard – Each offensive line has two guards situated on both sides of the center.Gunslinger – A quarterback with a powerful arm that can make any throw in the game and often does.

Halfback – The featured ball carrier among the two running backs lined up behind the quarterback. Generally, the halfback is the fastest member of the backfield and can also catch passes to pose a double threat to defenders.Holder – One player (the holder) is allowed to prop the ball up for the kicker on field goal and extra point attempts. The holder kneels seven yards behind the line, receives the snap from the center and places the ball on the ground for the kicker. The holder is usually a backup quarterback or the punter, whereas years ago, many teams used their starting quarterbacks as the primary holder.  Hole – A hole is the space opened by blockers for a ball carrier. Teams like Jacksonville haven’t created a hole to run through in ages, although the Jags’ defense is kind of like Swiss Cheese.Huddle – A huddle is when the offense and defense gather between plays to select what their upcoming play will be.Halftime – Oh…Everyone loves halftime. This break between the second and third quarters lasts 12 minutes during the regular season and 20 minutes during the Super Bowl. Smart coaches prepare their second half strategy – and then there are coaches like Gus Bradley. 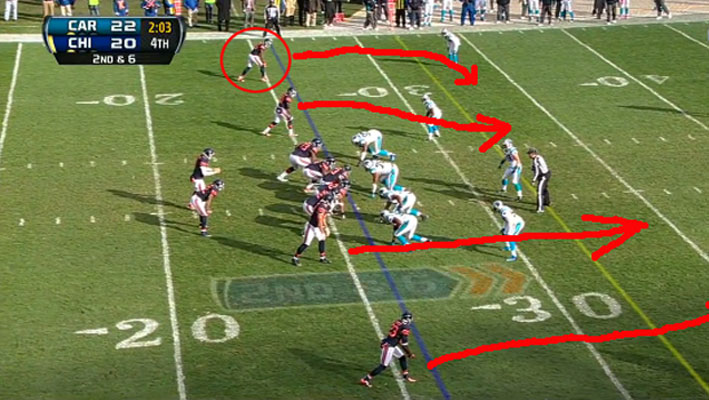 Incomplete pass – An incomplete pass was failed to be caught by an offensive receiver – or in the case of Jay Cutler – intercepted by the defense.

Linebacker – A linebacker is a multi-faceted defender that lines up in the middle of the defense behind the defensive linemen and in front of the cornerbacks and safeties who make up the secondary.Linebackers can make plays either stopping a ball-carrier, rushing the quarterback or by dropping into pass coverage.Locker room – The locker room is a term for the player’s dressing and showering areas as well as medical rooms.

Muff – When a player drops a punt and the ball becomes free for players from both teams to gather up.

Nickel defense – A defensive formation adopted in situations where the offense is expected to pass. A fifth defensive back is brought onto the field to cover opposing wide receivers, usually replacing a linebacker.

Overtime – The extra 15-minute period added on to regular season games to try to break ties. In playoff games, no game can end in a tie.Offense – The team with the ball.Officials – The NFL uses seven officials to control games. The unit is led by the referee, the umpire, head linesman, line judge, back judge, side judge and the field judge. 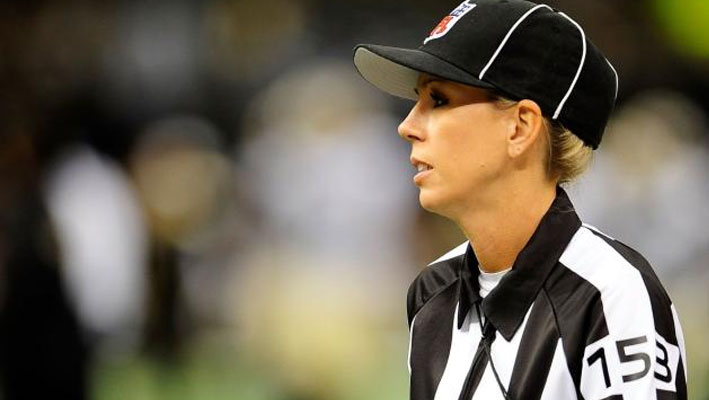 Pass rush – The on-rushing charge of any defensive player in order to pressure the quarterback as he attempts to pass the ball. A pass rush is usually generated by the defensive line….unless it’s the Oakland Raiders we’re talking about.Penetration – Penetration is when the defensive line overwhelms and pushes its way into the offensive backfield. Good penetration into the backfield disrupts many plays before they have the chance to get started.Playbook – A playbook is a ‘super secret’ collection of a team’s plays, including diagrams, strategies and terminologies. Each player is expected to know his playbook like the back of his hand, unlike Jets’ quarterback Geno Smith. A playbook is usually filled with more than 300 pages of plays and schemes.Penalty – A foul signified by the throwing of a yellow flag on the field. Pitch – A long underhanded toss, usually using both hands, from the quarterback to a running back on running plays.Power sweep – A running play in which the running back is led by both offensive guards and attempts to get around the end of the line in while the offense attempts to overpower the defense on one side of the field.Punt – A kick out of the hands by the punter on fourth down after the offense has failed to pick up a first down. The punting team kicks the ball away to make the opposing team’s trek to the end zone longer and that much harder.

Quarter – A 15-minute playing period. Four quarters make up an NFL game.Quarterback – The leader of the offense – and generally, the face of each franchise. The quarterback calls each play in the huddle and interacts with teammates between plays. After receiving the snap from the center to begin a play, the quarterback either runs with the ball himself, hands it to a running back or passes it downfield to a receiver. 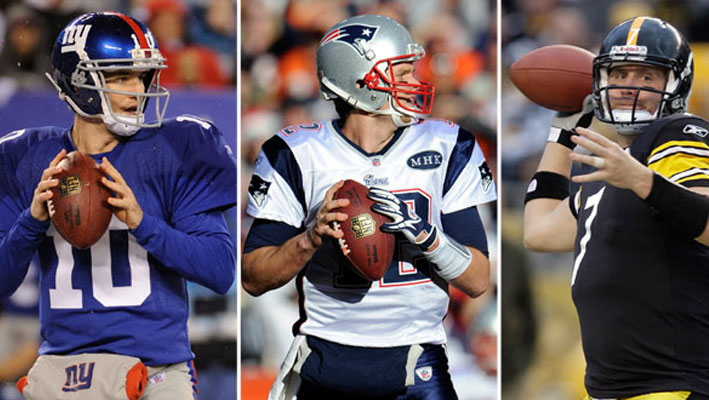 Roll out – A roll-out is a drop-back action where the quarterback drops back and rolls out to one side or the other before throwing instead of dropping straight back into the pocket as he does on most passing plays.Run – One of two ways for the offense to move the ball. This involves either the quarterback keeping the ball and running it himself or handing it to a running back or wide receiver.Running back – A general classification for halfbacks and fullbacks, whose primary responsibility is to run with the football.

Screen pass – A delayed passing play in which the defensive line is allowed to penetrate the backfield and the ball is thrown to a running back or receiver who has a wall of blockers in front of him made up of offensive linemen who have pulled out of position. Sweep – A run around the end of the line.Swing pass – A short pass thrown quickly to a running back running toward the sideline on either side of the quarterback.Scramble – When the quarterback runs to avoid being sacked while often still looking for an open wide receiver at the same time.Snap count – The signal on which the ball will be snapped into play. All members of the offense know this signal and therefore know when to begin blocking or running downfield.Spread – A spread offense utilizes  four or five wide receivers on the field instead of the normal two with one or no running backs in the backfield. This kind of offense ‘spreads’ the defense by stretching players across the field.Spot – The placement of the ball by a referee after a play has ended or a penalty has been called. The place where the next play will begin from.Scrimmage (line of) – The starting point where a play begins from.Secondary – The collective term for the cornerbacks and safeties assigned to cover an opposing teams’ receivers on passing plays…unless you’re talking about Chip Kelly’s Philadelphia Eagles that is.Sticks: The ‘sticks’ refers to the sideline down markers. A first down results in “moving the sticks.”Stiff Arm – When a ball carrier uses the arm he’s not using to carry the ball to push off defenders and would-be tacklers. 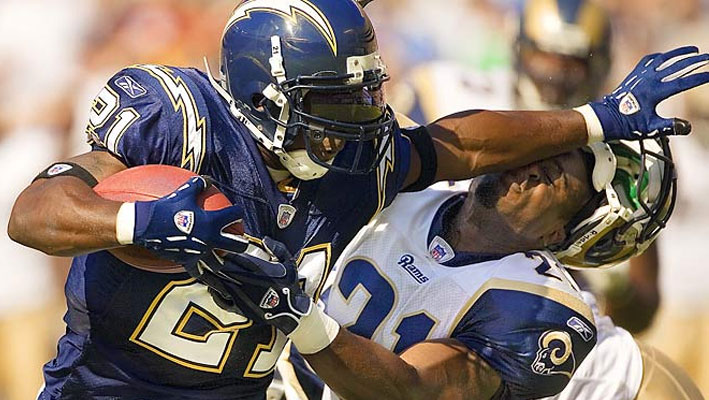 Snap – The beginning of a play as the center passes the ball backwards through his legs to the quarterback. Longer snaps signal the beginning of field goal attempts or punts.Spike – Whatever happened to the good old days when a player simply slammed the ball into the ground after scoring a touchdown?Split – The distance a player is separated from another player. Usually used while referring to receivers or tight ends.Substitutions – Each team is allowed 11 men on the field at the time the ball is snapped. Unlimited substitutions are permitted throughout NFL games but players may only enter the field when the previous play has been whistled dead. Players must be off the field by the time the new play has begun.Super Bowl – The NFL’s championship game played between the AFC and NFC champions. The Super Bowl is held in a different American city each season and is played in the final week of January or the first week in February.

Tackle  – 1. To stop the ball carrier by forcing him to the ground.A tackle is also the offensive linemen at each end of the line next to the guard. Their primary task is to protect the quarterback on passing plays by blocking the opponent’s pass-rushing defensive ends.Tee – A small, hard rubber stand used to hold the ball in an upright position off the ground on kickoffs.Tight end – Part receiver and part blocker. The tight end is positioned on the end of the offensive line. From there, he can act as an extra blocker on running plays or head downfield as a receiver in passing situations.Time out – A legal stopping of the game at any time. Each team has three time outs per half and can use them to stop the clock whenever they desire. Officials can also call time outs to measure first down yardage or if a player is injured.Touchdown – A touchdown is worth six points and is scored when a player takes the ball across the other team’s goal line either by running it in or catching it.Training camp – Preseason training camps for all 32 NFL teams usually takes place in the summer, about two weeks before the first preseason games begin in August. Teams usually bunker down in a college facility and live and breathe football for weeks on end, isolated from friends and family.

Wide Receiver – Usually two and sometimes three or four on the field at any one time. Wide receivers line up on either side of the offensive line, close to the sidelines away from other players. Wide receivers are usually among the quickest players on every team and their job is to run downfield, find open spaces and catch passes thrown by the quarterback Sources: ESPN.com: http://espn.go.com/nfl/player/_/id/9597/jay-cutlerWikipedia.org: http://en.wikipedia.org/wiki/National_Football_League
Older post
Newer post