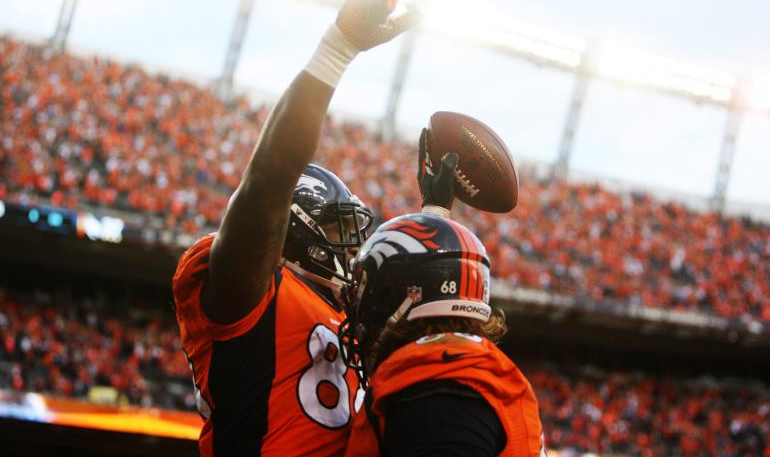 NFL News and Rumors
Pretty much everyone looked at the AFC before the season started and pointed at the Denver Broncos as being the team to beat. It all seemed to make sense, as they are the current AFC champ, and they still have that Manning dude at QB. At this stage of the season, though, not so many people are convinced that they are invulnerable.  So let’s review the NFL week 12 betting odds and other info heading to this game.
Date/Time: Sunday, November 23, 4:25 PM
Location: Sports Authority Field at Mile High, Denver, Colorado
Matters came to a head last weekend when the St. Louis Rams held the Broncos power offense to just 7 points en route to a surprising 22-7 win. That handed the Broncos their second loss in three games, as they had been pounded by the Patriots a couple of weeks earlier. In fairness to Denver, their offense has been hit hard by injury, but perhaps none as hard as Emmanuel Sanders, who suffered a highlight reel hit to the head against the Rams. Whether he plays this week remains to be seen.
The Dolphins are a team that is very hard to figure out, but you have to give them some props for being resilient. Every time it looks as though their season may have been killed by a loss, they find a way to bounce back and pick up a tough win. That’s exactly what they did last Thursday night against the Buffalo Bills, and you have to feel that the extra few days rest coming into this one is going to help some of their injured guys feel a little bit better.

The #Broncos are looking for a rebound Sunday vs. the @MiamiDolphins. LISTEN: http://t.co/5OobCe8QOg pic.twitter.com/K7k6BoHhzU— Denver Broncos (@Broncos) November 21, 2014

BETTING ODDSDespite their injury woes, the Denver Broncos are still one of the elite teams in the AFC. They are favored to win this one by 7, but they have not been entirely convincing ATS this season, going just 5-5. Perhaps more surprising than that is that they are just 3-2 ATS when playing at home.Miami are 6-4 ATS this seasons, and have split things right down the middle when playing on the road. These two teams haven’t met in the past 3 seasons, but if you go all the way back to 1992, you may be surprised to learn that the Dolphins are 4-1 ATS in games played at Mile High.Game Odds:DOLPHINS: +7-115, OV 47 ½ -110, ML +275BRONCOS: -7-105, UN 47 ½ -110, ML -325Denver should be good enough to win this one at home, but there are genuine concerns about the health of their offense. As much as I think they will win, I don’t think it will be in convincing fashion.
Older post
Newer post