Written by Jordan Walters on September 29, 2015

NFL News and Rumors
It seems like it’s been a decade for NFL betting fans since the San Francisco 49ers appeared in the Super Bowl if you look at the way that they play now. If I were to tell you that it’s only been three years since they faced off against the Ravens in Super Bowl XLVII, you might be surprised – even after they dismantled the Minnesota Vikings in Week 1. The 47-7 pasting that the Arizona Cardinals (who are looking more and more like sure candidates to go to Superbowl) applied to San Francisco made the 49ers look like they belonged in the dregs of the league.

Check out all the beautiful moving pictures from the #AZCardinals dismantling of the #49ers. #SFvsAZ https://t.co/GRbXcSN4EW

What happened? Well, two of Colin Kaepernick’s first four passes for the Niners went for touchdowns – but for the Cardinals. Justin Bethel returned the first one 21 yards for a score, and Tyrann Matthews brought the second one back from 33 yards out. Mathieu would intercept another one as Kaepernick threw a total of four interceptions and went 9 for 19 on the day for 67 yards. His quarterback rating was a 16.7. As Mathieu told ESPN, “Their passing game has simplified so much. It was easy for us to anticipate routes and just get some good breaks on the ball.” The fourth pick went to cornerback Jerraud Powers, who said, “That’s the most perfect possible way that we can start a game off on defense.” 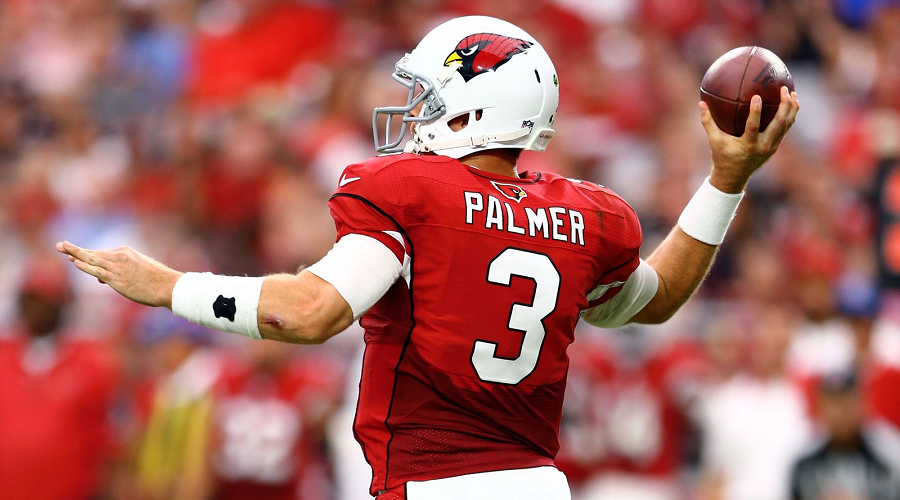 And what about Carson Palmer? He seems to be firing on all cylinders in his return from a season-ending injury in 2014. He threw for 311 yards, including nine balls to Larry Fitzgerald, who picked up 134 yards and scored two touchdowns. Chris Johnson ran for 110 yards and two touchdowns. It’s the first time the Cards have scored more than 40 points in consecutive victories (they beat Chicago 48-23 in Week 2) since 1969. It’s the Cardinals’ widest margin of victory since they beat the Houston Oilers in 1970. 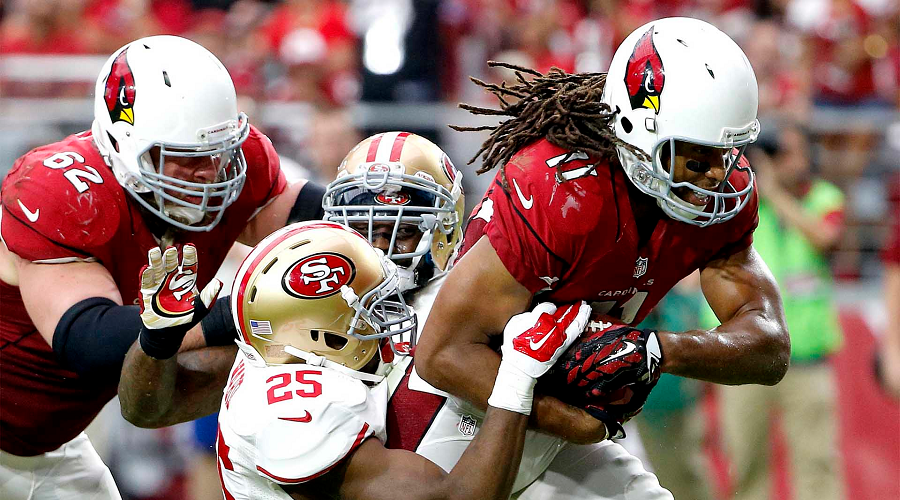 Here’s the scary part – as Fitzgerald told ESPN, “We’re not clicking on all cylinders yet, and that’s scary to think about, that we can get much better.” 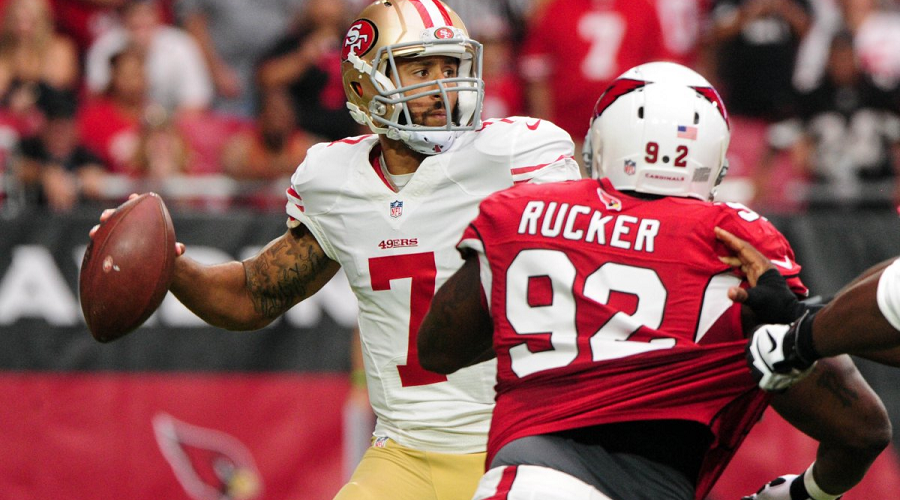 Kaepernick took all of the blame. He told ESPN, “It’s very hard to see myself go out and play like that and hurt this team the way I did. I nullified all the efforts of every player on the field today.” He did scamper for a 12-yard score for the 49ers, but it was far too little, too late. One potential problem could be the simpler passing scheme the team is running under new head coach Jim Tomsula. 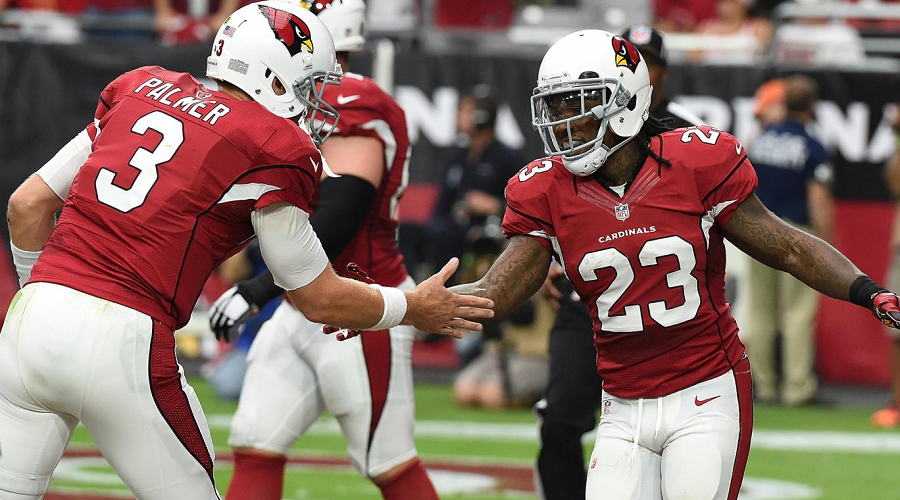 The Cardinals now have an early two-game lead in the NFC West, as the Rams, Seahawks and 49ers are all 1-2. Palmer has won nine consecutive starts, the longest active streak in the NFL. In his last 18 starts, he is 16-2. The defense added a third score when Kevin Minter nabbed Carlos Hyde in the end zone for a safety. 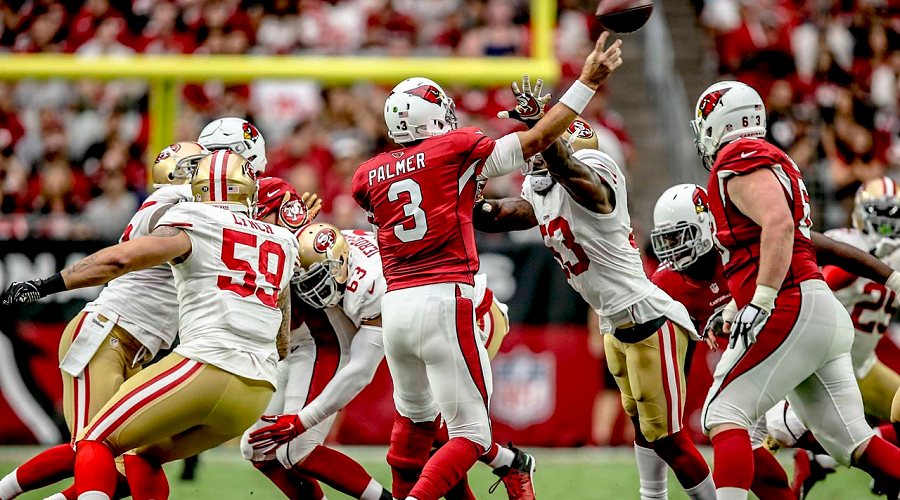 Even when Palmer threw an interception, the Cardinals got it back quickly. Kaepernick threw a deep ball but Mathiew found it, bringing it back 17 yards and setting up a field goal near halftime for the Cards, who went into the locker room up 31-7.
Older post
Newer post