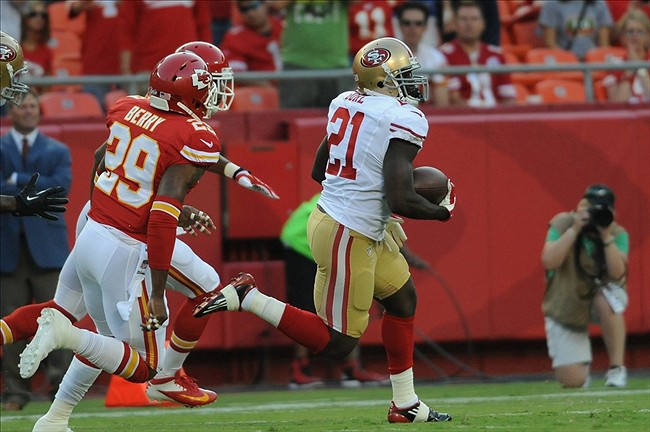 Written by Jordan Walters on October 5, 2014

NFL News and Rumors
Week 5 of the pro football season is already upon us, but unlike what you may be thinking, some betting picks get easier the closer we get to the Sunday action. That’s the case with the Chiefs-Niners game slated for this Sunday afternoon, which offers NFL betting fans a great value. So here’s our NFL Week 5 betting prediction and pick.

The Kansas City Chiefs’ match with the San Francisco 49ers, both teams that are 2-2, will create a special reunion. Alex Smith, the Chiefs quarterback, was the first overall pick by the 49ers in the 2005 draft. He was traded in 2013 after current 49ers quarter Colin Kaepernick performed well in Smith’s absence during an injury. Both quarterbacks and their respective teams experienced plenty of success last year as they both made the playoffs. The two teams are practically on the same page at this point. However, the Niners have the advantage for the game at Levi’s Stadium in Santa Clara.

A Look At the Teams

The Chiefs won their last two games with the most recent being a 41-14 win over New England. Although Alex Smith only has 891 passing yards, the Chiefs’ running game has tallied 581 rushing yards. Much of this has been done without Jamaal Charles. Charles only returned from an injury just last week and got nearly a hundred rushing yards. Knile Davis has 321 rushing yards and Smith has passed the 100-yard-mark too. Linebacker Justin Houston has been a big bright spot for the Chiefs as well. Houston currently has five sacks. The 49ers beat Philadelphia 26-21 last week, thus snapping a season-long struggle to score in the second half of their games. The Niners also have a nearly-identical series of offensive totals. Colin Kaepernick only has 912 passing yards plus four interceptions to go with six touchdowns. However, the Niners have 554 rushing yards with Frank Gore getting 258 and Kaepernick coming close to the 200-yard-mark. The Niners have forced and recovered four fumbles and have five interceptions with two going to Parrish Cox. Lineman Justin Smith also has three sacks.

Based on the statistics, there is a good suggestion that the game will be rather reliant on the running efforts of both teams. However, the 49ers have the second-best rush defense in the NFL as they have given up about seventy yards per game. In addition, the Chiefs have limited their opponents to fifteen points or less in their last two games while limiting opponents to 220 passing yards per game. To go along with this point, the Chiefs may want to utilize a tandem between Charles and Davis on the ground with Smith getting some rushes on occasion. While their opponent has a strong running defense, the versatility of the Chiefs’ running offense will certain give them a real challenge. Game Odds: CHIEFS: +4½-110, OV 43 ½ -110, ML +175 49ERS: -4½-110, UN 43 ½ -110, ML -205

It may take years before anyone truly knows who won the deal that sent Alex Smith to Kansas City while allowing Colin Kaepernick to stick around in San Francisco. The trade is neck-and-neck in hindsight at this point. The 49ers have the advantage as they are at home on the west coast but this doesn’t mean that Chiefs don’t have a shot. The 49ers are -4.5 favorites to win this game according to the latest odds on NFL. While the team has an advantage at home, the game will probably be tight but there is a shot that they will go over the 43.5 over/under. Expect the 49ers to barely come out with a 26-22 win.
Older post
Newer post