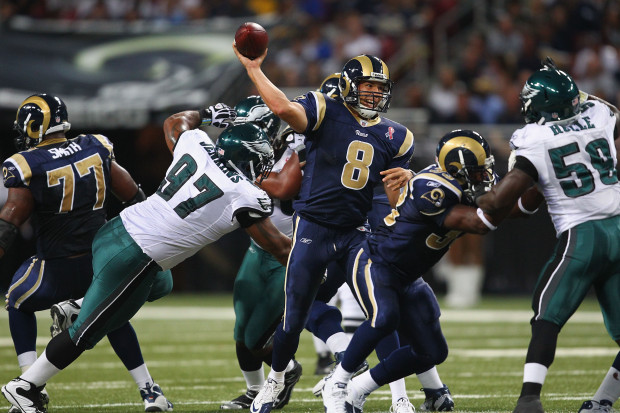 NFL News and Rumors
A demoralizing 34-31 loss to the Dallas Cowboys after holding a 21-0 lead in the first half is something all St. Louis Rams want to put behind entering Week 5 of the NFL season. Thankfully, the Rams were off a bye week last Sunday, so they’ve had enough rest and time to think about making amends to the fans. But more importantly, the Rams will take on the Philadelphia Eagles on Sunday, Oct. 5—an opportunity to bounce back to winning ways. For the Eagles, who are 7-point favorites in the NLF game odds, there is not much pressure for the team, except the need to win the game to bounce from last week’s  26-21 loss to the San Francisco 49ers and stay on top of the NFC East. The game is set to kick off at 1 PM ET and will be played at the Lincoln Financial Field, Philadelphia. Catch all the live TV action on Fox and Channel 708 for DirecTV. Below is a preview of what you can expect as you prepare to bet on the game. Betting Preview Despite losing 26-21 to the San Francisco 49ers last Sunday, the Eagles are enjoying a decent 3-1 start to the season. But if they are to get a victory, as is expected by most bookies and bettors, Philadelphia must find ways of filling the holes in their defense while attacking more accurately. A few defensive lapses led to the narrow loss last week. But with safety Malcolm Jenkins being on a strong defensive come-up, the Eagles have players that can help them improve. Offensively, Eagles’ QB Nick Foles finished the game against the 49ers with 21 of 43 completed passes for 195 yards and two interceptions. In that game, Foles had many miscued passes and failed to deliver some crucial passes that could have won the game for the Eagles. Such costly mistakes together with an under-par performance by the usually-lethal LeSean McCoy summed up a disappointing game by Philadelphia. Game Odds: RAMS: +7-115, OV 47 ½ -110, ML +235 EAGLES: -7-105, UN 47 ½ -110, ML – Meanwhile, Rams’ coach Jeff Fisher announced on Wednesday that Austin Davis will lead the team as the starting quarterback. Though he threw two picks in the game against the Cowboys, Davis had a strong outing with 327 yards. Another inspired performance from the QB can help the Rams take advantage of the occasional defensive errors by the Eagles. Unfortunately, throwing a 21-point lead is very worrying, especially for a pro football team. The Rams must therefore be more tactful defensively and be able to protect their points. And while doing so, the team should put additional pressure on Foles and disrupt the Eagles’ passing rhythm. This way, they will limit Philadelphia’s offensive play and they may even steal a win, like was done by the 49ers. Prediction Historically, the Eagles have their tails up as far as their head-to-head record with the Rams goes. In their last 11 meetings, the Eagles have a 9-1-1 ATS and 8-3 SU record against the Rams. This history, combined to their strong attack, will steer the Eagles to a convincing win and cover the NFL game spread.
Older post
Newer post