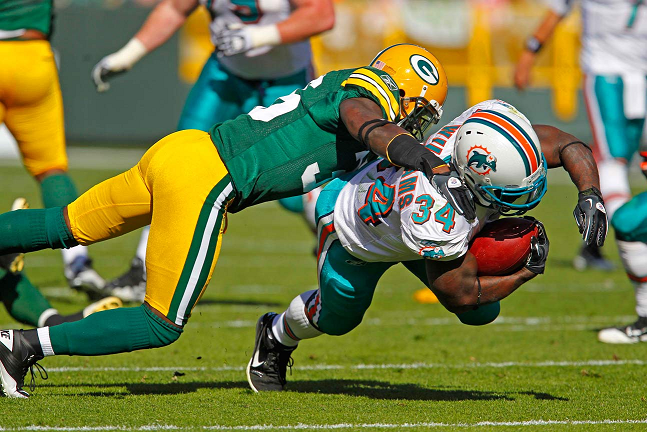 NFL News and Rumors
The 2014 NFL season has got off to a bit of a strange start in that no team has really looked to be one that will be dominant throughout the game calendar. So far only two teams are showing signs of brilliance (Cowboys and Chargers), but the NFL is unpredictable, and that can change anytime in the coming weeks of the season. It seems that every team has a little bit of a Jekyll and Hyde thing going on, and no two teams represent that better than the Miami Dolphins and Green Bay Packers, who will meet this Sunday in Miami.  So let’s take a look on both teams, their records, previous games and NFL game odds heading to this game.

The Dolphins started this season looking like world beaters, downing the heavily favored New England Patriots by a score of 33-20. That score line looked a little less impressive when the Pats went on to struggle in the following weeks before eventually righting the ship a little. That opening performance was followed by two pretty awful losses to Buffalo and Kansas City, where the Dolphins offense was only able to put 25 combined points on the board. The needed a statement game against the Raiders, and they got it, humbling the silver and black with a 38-14 win. The Dolphins stand at 2-2, third in the AFC East and trailing behind the Pats and Bills (3-2).The Green Bay Packers, who stand in second place in the NFC North and right behind the 3-2 Lions, have had issues similar to the Dolphins. They suffered a 16-36 setback on Week 1 against the Seattle Seahawks, but were able to rebound and outlast the hapless Jets before stinking the joint out on a road trip to Detroit. Questions were asked about the Packers offense after that loss, and they responded with back to back wind against the Chicago Bears and Minnesota Vikings, putting up a combined 80 points in the process. QB Aaron Rodgers has shinned on the last games and suddenly looks like a man on a mission, and that could spell trouble for the Miami Dolphins on Sunday.

The Packers come into this game as slim 3-point favorites, with the point total set at 49. Green Bay is 2-2-1 ATS this season, although they have covered in their last 2 games. Miami is 2-2 ATS this season, and they failed to cover in their only home outing so far.Betting Trends:-Dolphins are 3-1 to the OVER this season-Packers have also gone OVER in 4-of-5 their games-Dolphins are 13-8 are ATS as underdogs under Joe Philbin (61.9 percent).-Packers are 19-13 ATS(59.4 percent) as road favorites of a field goal or more.Game Odds:PACKERS    -3-105    OV 49 -110, ML -155DOLPHINS: +3-115, UN 49 -110, ML +135What is a little more telling is how these two have gone with the game totals. The Packers games this season have seem the OVER hit 4 of 5 times, while the Dolphins games have gone OVER 3 out of 4. That’s a pretty strong trend on both sides, and is also one that plays out when these two teams meet in Miami. They have only played there twice since 1992, but both games went OVER.The 3-point football betting spread is pretty small, all things considered, and is one that the Packers should be able to cover quite easily. The play that really seems to stand out here, though, is the OVER, and that is where my money will be going.
Older post
Newer post