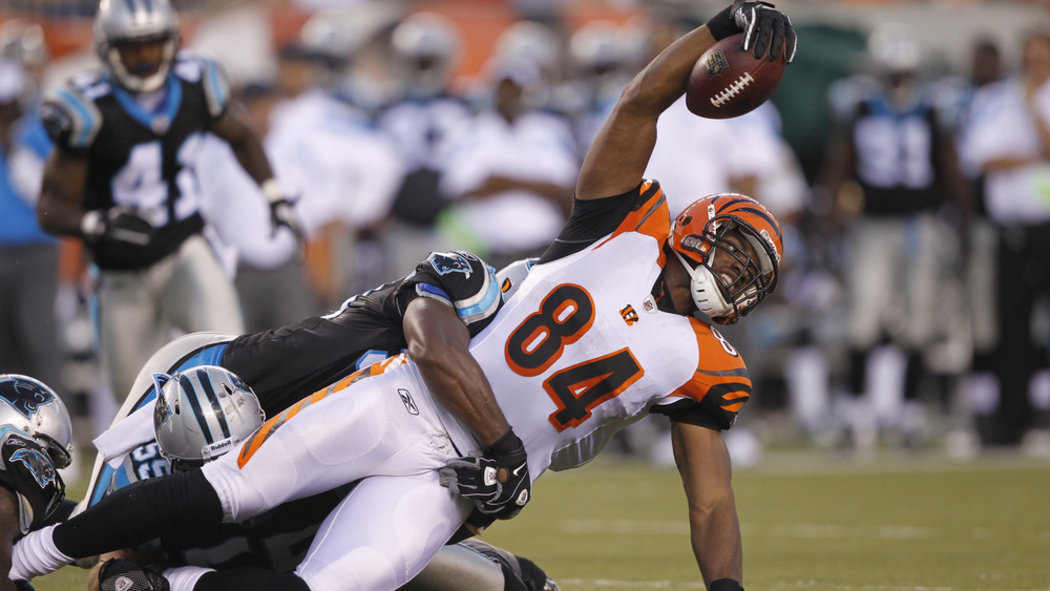 NFL News and Rumors
Last week’s win over the Chicago Bears brought a much needed relief to the Carolina Panthers. After back to back losses to Baltimore and Pittsburgh on Week 3 and 4, the Panthers needed to bounce back with a victory and retake the lead in the NFC South. Now the 3-2 Panthers will be seeking a fourth victory as they play against the 3-1 Cincinnati Bengals, who enter the match as one of the top NFL picks against the spread for Week 6. A dramatic 31-24 come-from-behind win after a 14-point deficit against the Chicago Bears ensured that the Panthers got a vital victory last Sunday. For the Bengals, it was a disappointing weekend as the team suffered its first defeat of the season in a demeaning 43-17 battering in the hands of the New England Patriots.

With the murky waters of the highly-charged NFL picking up speed and threatening to drown weak teams, both the Panthers and the Bengals will want to swim to safety by getting a win when they faceoff at the Paul Brown Stadium. Check out the analysis below for the tactical approaches and key game issues that will help decide the NFL betting odds and spreads for the matchup.Bettors’ Guide: Match Preview and AnalysisAvoiding a third successive defeat, and doing it convincingly after trailing the Bears with 14 points, is indeed a strong statement about the Panthers’ never-give-up fighting spirit. In that game, Cam Newton was arguably the best player with his game-winning touchdown pass. In total, Newton finished the game with19 of 35 passes completed for 255 yards, two TDs and an interception. If he can keep up his game-winning performance and continue his good connection with tight end Greg Olsen, the Panthers should have a solid offensive presence in the game. Olsen suffered an ankle injury, but is likely to be back for this game.Game Odds:PANTHERS: +6½-110, ML OV 43 ½ -110, ML +240BENGALS: -6½-110, UN 43 ½ -110, ML -29Carolina’s defense and special teams have been to make up for the occasional mistakes made by their forwards. Though ranked at position 20 in defense, the Panthers have forced 10 turnovers this season. If they are to stop the astounding Bengals’ offense that has allowed just one sack in four games, forcing turnovers and breaking plays while avoiding mistakes of their own will be of utmost importance this coming Sunday.Notably, the Panthers are 1-4 ATS in their last five games on the road and 6-2 SU in their last eight games on the road. Contrastingly, Cincinnati is 3-1 ATS and SU and 11-1 ATS in 12 home games. This, essentially, is the main reason the Bengals are considered as a strong contender for the playoff and favorites to win this home.However, a 27th total defense ranking (a tumble from last year’s ranking at number three) in the nation underscores Cincinnati’s backfield vulnerability. A series of turnovers and fumbles in last week’s game cost the team dearly—something which they have to limit against the Panthers who lead the NFL with a season-best 10 forced fumbles against their opponents.If you’ve been keenly watching the NFL, the deadly offensive combination of Andy Dalton, A.J Green and Mohamed Sanu is nothing new to you. Impressive scores by Cincy in the first three games of the season attest to the ferocious attacking potential of these players. Another customary good offense by these Cincinnati front men should easily dismantle Carolina’s defense.For Panthers’ tacticians, there is however some glimmer of hope. In the last game, Andy Dalton was sacked for the first time this season. If the Panthers bombard him with unrelenting pressure, they could force him to make some mistakes, thus restraining his heavy-handed offensive presence.

Though the Panthers will give a good account of themselves with an average performance, Cincinnati is 4-1 against NFC opponents since 2013, a record that makes the Bengals a much better football pick for Week 6.
Older post
Newer post