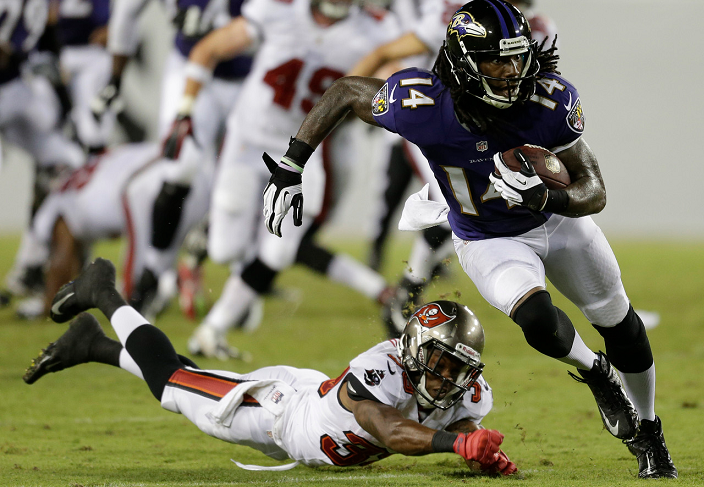 NFL News and Rumors
The Tampa Bay Bucs can’t afford another loss. Since the arrival of Lovie Smith as head coach, the Bucs had more downs than ups, losing four games and winning just one. With the exception of the 56-14 blowout against the Atlanta Falcons on Week 3,  they have came close on each of their losses, but as we all know, you can lose by a close or a large margin, but a loss still a loss. The Bucs desperately need a win on Week 6 against the Ravens, who are 3-2 and just half a game behind Cincinnati for the top of the AFC North. So let’s review the game insights, NFL betting odds and other details heading to this match.

The Ravens enter this game fresh from a 20-13 loss to Indianapolis last weekend that snapped a three-game winning streak. Baltimore’s running game has been mixed with Justin Forsett, Lorenzo Taliaferro and Bernard Pierce all running in a rush offense by committee. They have combined for more than 600 rushing yards this year. Meanwhile, new acquisition Steve Smith has 463 receiving yards.The Buccaneers lost in overtime to New Orleans 37-31 after their upset win over Pittsburgh a week earlier. Mike Glennon has been the starting quarterback in the last two games and has five touchdowns but has also been sacked four times. There are already five receivers on the Bucs with triple-digit receiving yards with Vincent Jackson having 278 to top the team.

While Mike Glennon has been a dramatic improvement over Josh McCown, the Buccaneers have still struggled with trying to stop the passing game on the over side. The Bucs have the third-worst pass defense in the NFL with 292 passing yards given up. In addition, Doug Martin has still been shaky from a rushing standpoint with regards to the ability to pull off a strong running game.The Ravens have a good passing game as Joe Flacco has 1,290 passing yards this year. While he could light up the Bucs’ defense, the Ravens have a pass defense issue of their own as well, giving up 270 yards per game. This could make for Glennon’s best shot at making a stand this year.The Ravens also have two injury concerns. Defensive end Chris Canty is out with a wrist injury. Cornerback Asa Jackson also has a sprained toe and it is highly doubtful that he will play this Sunday.

Game Odds:RAVENS: -3-125, OV 43 ½ -110, ML -190BUCCANEERS: +3+105, UN 43 ½ -110, ML +160While the Buccaneers have made an effort to catch up so far, the Ravens have much more momentum above all else. The Ravens’ varied running game and their strong pass performance should offset any passing efforts by the Bucs. This will be much closer than what the records suggest but the Ravens should pull off an easy victory.Lovie Smith’s plans for the Tampa Bay Buccaneers may take a while to come to fruition. While the Buccaneers have looked much better than they did during their Monday night blowout loss in Atlanta earlier this year, they still have a great amount of work to do in order to get further and improve their NFL betting lines. Expect the Ravens to make a strong effort against the rest of the AFC North where just one game separates the division-leading Bengals from the Cleveland Browns.
Older post
Newer post