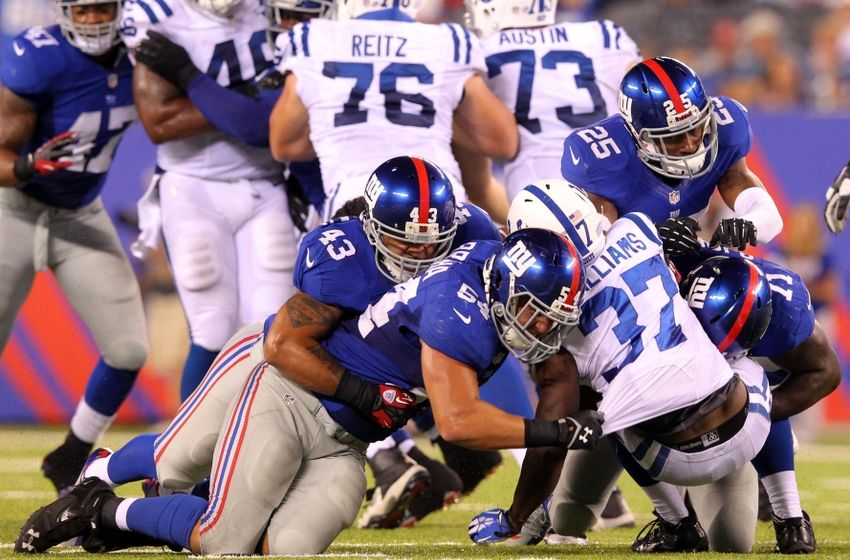 Written by Jordan Walters on November 1, 2014

NFL News and Rumors
In this week’s Monday Night Football game, the 5-3 Indianapolis Colts are looking to bounce back from their blowout loss to the Steelers as they hit the road to face the New York Giants in an NFC East showdown. The 3-4 Giants are coming into the contest fresh from a bye week hoping to prevent a three game-skid after back-to-back losses, including defeats to the Cowboys and the Eagles.  Despite the loss to Pittsburgh on Week 8, the Colts lead the MNF betting odds, listed at 3-point favorites to beat the Giants. Venue: MetLife Stadium, East Rutherford Date/Time: Monday, Nov. 3, 2014, 8:30 PM ET Broadcast on ESPN

Breaking Down the Indianapolis Game Plan The Colts are looking to recover from a disappointing 51-34 loss in the hands of a ruthless Pittsburgh Steelers in last week’s game. Indianapolis’ defense had prevailed against challenging offensive lines in five straight games only to crumble against the Steelers last Sunday. The Colts defense allowed 639 total yards against Pittsburgh after a promising display in their previous games this season. Defense is a key area in the Indianapolis team and not much of their hard work has gone to the gutter. All they need is to readjust this defense and tweak it to be appropriately-tuned against the Giants’ pass-oriented offense. This will greatly help them to control the offensive speed and passing game of the Giants. Indianapolis QB Andrew Luck is a threat to any defense regardless of its NFL ranking. Against the Steelers, Luck recorded 400 yards with three TDs. His play making abilities will have a huge impact on the Colts’ offense, though there is need for his teammates to protect him against the Giants’ physically-strong defense. Furthermore, the Colts have ripe talent in CB Vontae Davis and RB Ahmad Bradshaw and they could easily cause nightmares to the Giants if they use these two players effectively. Bradshaw is the Colts’ current rushing-yardage leader with 374 yards on 76 carries. His inclusion in the starting lineup will therefore be crucial for the team’s rush game. Breaking Down the New York Giants Game Plan This game will be a big chance for the Giants to overcome the various disappointments they have witnessed in the recent past. Before their bye week, New York lost 31-21 to Dallas. The Giants are likely to line up the promising wide receiver Odell Beckham Jr since RB Rashad Jennings and QB Eli Manning are a doubt for this week’s game because of injuries. Game Odds: COLTS: -3-120, OV 50 ½ -110, ML -170 GIANTS: +3EV, UN 50 ½ -110, ML +150 Key betting Trends The Colts are 5-1 SU and ATS in their last six games The Giants are 3-1 SU and ATS in their last four games. The Colts are 4-2 ATS in their last six road games The Giants are 6-3 SU in their last nine home games
Older post
Newer post