NFL News and Rumors
Adrian Peterson is back, and in a big freaking way! Playing his first game at the TCF Bank Stadium in 21 months after he was deactivated last season due to his indictment on child injury charges on September 12, 2014, the star running back received a standing ovation when his name was announced before the game. What followed after that was a showcase reminiscent of his memorable 2012 season, when he bulldozed his way to win the coveted NFL MVP award, as fans chanted “AP! AP!” to support his fine display on the field against the Lions.

When all was said and done, Peterson finished the game as the leading rusher with 134 rushing yards on 29 carries, along with a team-best 58 receiving yards on two receptions, helping the Minnesota Vikings (1-1) to claim a 26-16 win over the visiting Detroit Lions.Against the Lions, the 30-year-old running back looked distinctly different in composure and confidence, compared to the Peterson who featured against San Francisco last week, where he carried the ball just 10 times for 31 yards. After admitting that he was still a little uncomfortable getting the ball in the shotgun after the loss to the 49ers, the stud back showed why he’s highly regarded as a Future Hall of Famer, exhibiting poise both under the center and in the shotgun. For example, in the first half of Sunday’s encounter, Peterson got eight carries from shotgun or pistol and tallied 28 yards, and also added 52 yards on eight carries with his QB Teddy Bridgewater under the center.As you’d probably expect after a long lay-off, the running back wasn’t all crisp throughout the game. Case-and-point, he missed a crucial block in front of Bridgewater in the second quarter, and also fumbled the ball in Minnesota’s first play of the second quarter from a shotgun carry from Detroit’s 11, costing the Vikings a scoring opportunity. To his defense, though, this is a guy who is playing just his second games after sitting on the sidelines for 53 weeks, hence needs a bit more time to crust off the rust in his game. 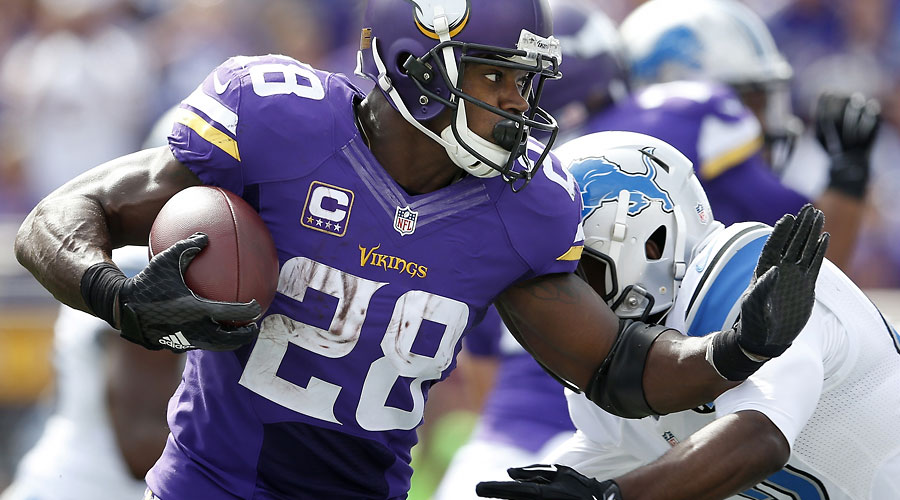 Plus, going by the way he bulled Detroit’s defenders and connected well with his young QB, we should be able to see more of the old beastly Peterson that dazzled the league with his superhuman strength and speed, making plays like these after a near career-ending injury:No doubt, the likes of Jamaal Charles, Carlos Hyde, and Matt Forte have had a strong start to the 2015 NFL season, making them early favorites to offer solid value for fantasy NFL betting enthusiasts, especially in terms of leading the league in rushing. But if you are looking for proven efficiency, the will and dedication to be the best, the strength to pound it hard on the ground, and the mind to make someone a star amidst all kinds of adversities, then your best bet would be none other than the legendary Adrian Peterson. And Yes, He is Back!!!
Older post
Newer post