NFL News and Rumors
As the Cincinnati Bengals have roared out to a 7-0 start, few players have contributed as much to their and their NFL lines fans early success as wide receiver A.J. Green. This is why the Bengals, clear contenders for a spot in Superbowl recently awarded him for his contributions over the first four seasons in the league by paying him $60 million over the next four seasons. From all perspectives in the team, he should catch the ball every time Andy Dalton fires a pass in his direction.
So when reporters asked him what his biggest memory from the Bengals’ 33-13 victory over the Oakland Raiders was back in September, Green didn’t think of the terrific team defense or the offensive firepower that the Bengals showed. Instead, he said simply, “I can’t be dropping touchdowns.” 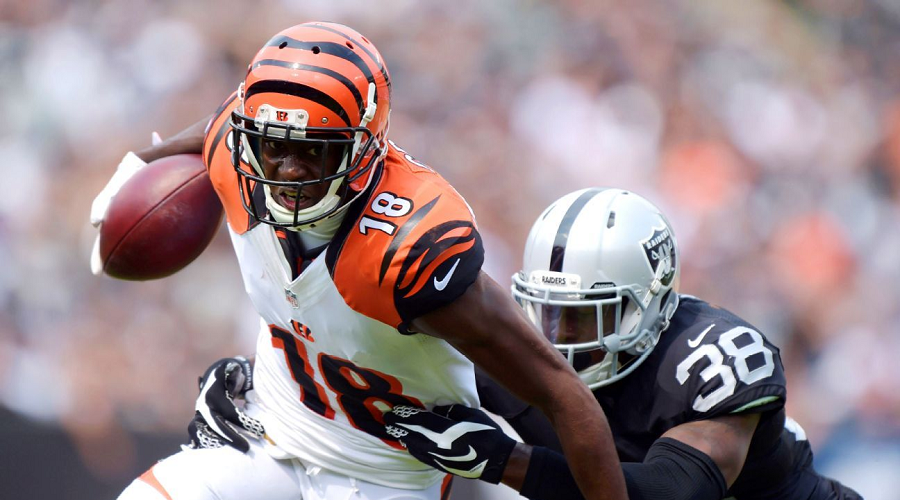 He was talking, of course, about the 15-yard touchdown reception that he felt slip right between his hands just as he was sliding across the goal line. He had juked Raider cornerback T.J. Carrie with a lightning-swift movie right off the line of scrimmage, giving him enough separation for Dalton to put the ball right on his hands.
As the ball approached, Green jumped without a hand on him. When he came down, though, landing on part of the right field warning track at O.co Coliseum in the south end zone, the ball had already landed on the ground. Of the eight targets that went Green’s way that game, it was the only one that he dropped. The Bengals were already up 7-0 at the time, but the drive stalled and the Bengals had to settle for a field goal. As Green told ESPN.com, “Drops happen, but I’ve got to do my best not to let that happen. I’ve just got to keep playing and that’s what I did. I had some catches after that. I played well after that. He did finish with five catches for 63 yards…but no touchdowns. Three of those catches, though, did give the team first downs.

It’s not just Green’s commitment to sure hands that sets him apart, though. He also spends a considerable amount of time in the film room preparing for the next opponent. It is this commitment that has set him apart from much of the competition – and it has been what has helped him turn the tide in his personal rivalry against Pittsburgh Steelers cornerback Ike Taylor.
In Green’s first three seasons in the NFL, the Bengals and the Steelers met six times. In three of those games, the Steelers held Green under 42 yards, about half of his normal average. In two of those games, he only caught one ball, much less than his average of 5.5 receptions per game. In their later meetings, though, the tape that Green had watched convinced him that he had more speed than Taylor, so he began using deep slants to get separation from Taylor and then find an opening down the field. Since Taylor is nearing retirement, he can laugh at this now. However, A.J. Green is just now entering the prime of his career. Hopefully the Bengals will continue to be able to take advantage.
Older post
Newer post