NFL News and Rumors
In a stunningly surprising move that is likely to draw more criticisms than attract praise, the New York Jets have announced that QB Geno Smith will get the starting role in the team for the 2015-2016 season.Last Wednesday, NY Jets new offensive coordinator Chan Gailey surprisingly announced that, “Right now, Geno’s the starter.” Gailey went on to say, “That’s the way it sits and that’s the way we expect it to be unless something happens where you get an injury or something like that that you don’t foresee.”We’re sure than such announcement will have an impact on the NFL odds for the coming season. Smith has been heavily criticized for his role as team leader and his poor offensive skills, and while the Jets aren’t consider favorites or a strong candidate to get to the postseason, having a quality QB would definitely help them to improve their chances to have a decent season this year.

Geno Smith WILL be the starting QB for the @NYJets in Week 1 (via @NFLTotalAccess) pic.twitter.com/aGf1kDqTG0

Why Smith and Not Fitzpatrick… Or Petty? 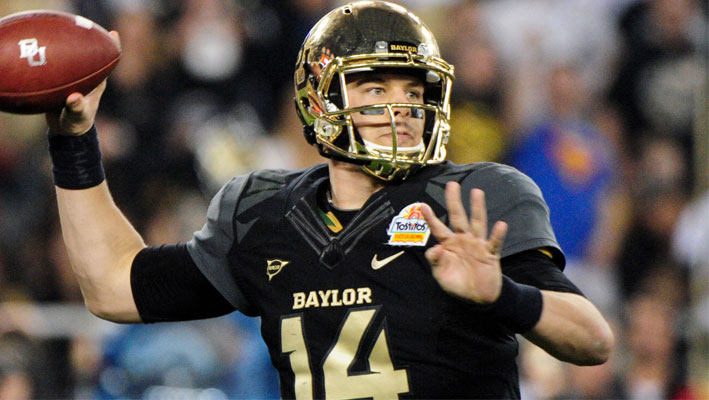 In many ways, the shocking news is likely to have a huge impact on the 2015 NFL betting lines. For starters, new Jets Head Coach Todd Bowles had earlier stated that there would be competition in training camp, with the job being given to the most productive member of the team. Naming Smith as the starter will thus influence the NFL picks that were pegged on veteran Ryan Fitzpatrick and fourth round pick Bryce Petty as possible starters in the quarterback department.Even more concerningly, Fitzpatrick (who was acquired from Houston in March) had a better 2014 season than Smith, hence would have logically made a better pick at the starting QB role. The 32-year-old Fitzpatrick passed for 2,483 yards with 17 touchdowns and 8 picks last year, completing 63.1 percent of his passes in the process. Conversely, the 24-year-old Smith threw for 2,525 yards with 13 touchdowns and a massive 13 interceptions in 2014. As far as their 2014 quarterback ratings go, Fitzpatrick finished with a career-best 95.3 QB rating, while Smith rated at 77.5.Nonetheless, Jets new general manager Mike Maccagnan worked in Houston last year and watched Fitzpatrick when he started 12 games, while Gailey also worked with Fitzpatrick when he was Buffalo’s head coach from 2010-2012, with Fitzpatrick having considerable success under Gailey in 2011. Therefore, the fact that both Maccagnan and Gailey have selected Smith over Fitzpatrick could mean that there is something they know… and we don’t, hence we should let it all play out and see how everything goes.

What Does Smith Bring to the NFL Betting Table? 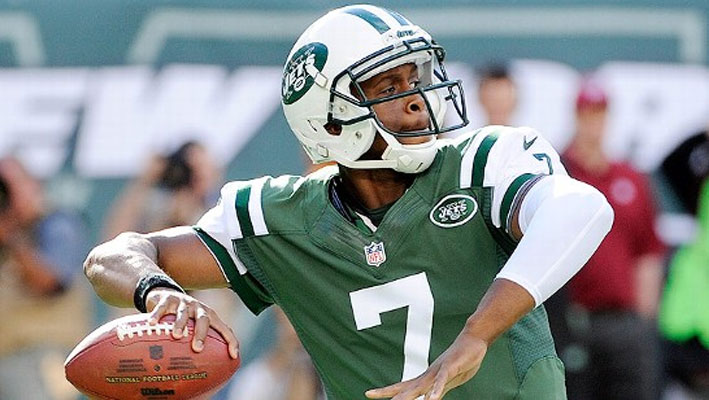 Considering Smith is 11-18 in his career as a starter, I wouldn’t be keen on trusting him to win games as a starter, even if the Jets have made a couple of decent additions to the team. In 2013, the third year QB was 8-8 in 16 starts. His efficacy dropped in 2014, as he went 3-10 in 13 starts. Meanwhile, in 30 career games (including 29 starts), Smith has a worrying touchdown-to-interception ratio of 25-34.With his dropping winning efficiency and high TD-to-interception ratio, both which seem to worsen by the day, it doesn’t look like the Jets will have a lot of value in the 2015 NFL lines.To his defense, though, Smith showed that he’s capable of surprising us with good results, when he completed 20 of 25 his passes for 358 yards, 3 TDs and zero interceptions in the 37-24 season-finale win in Miami. The outstanding performance by Smith in that game earned him a perfect 158.3 rating—the only perfect quarterback rating in the league in 2014. Bettors should therefore not write him off completely, as far as rebounding with a decent season is concerned.

Predicting the 2015-2016 Jets Season with Smith as a Starter 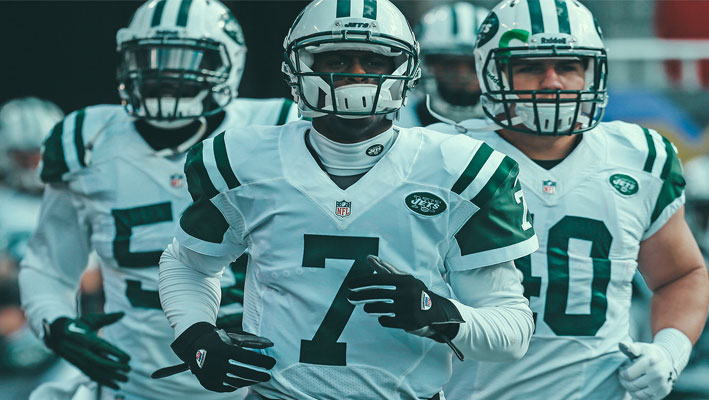 To a large extent, the efficiency of Smith as a starter will be largely determined by his touchdown-to-interception ratio. However, the players who surround him will also play a significant role in his eventual numbers. Having glimpsed the effect of his individual skills, let’s take a look at the effect of the players in New York in the upcoming season.The biggest offseason move for the Jets was the exit of Percy Harvin, who was replaced by the versatile big man Brandon Marshall that was signed from the Bears. Even with injuries limiting his effectiveness in 2014, Marshall was able to collect 721 yards as a wide receiver for Chicago. Prior to that, Marshall had seven consecutive 1000-yard seasons, underlining his potential. In addition, Marshall’s eight touchdown catches in 2014 was equal to the total (8) TD catches posted by the entire wide receivers in the Jets team last year. His addition to the team should thus be a big boost for Smith’s numbers, with Eric Decker (the team’s leading receiver in 2014 with 74 catches for 962 yards and 5 scores) also continuing to make his mark in New York. 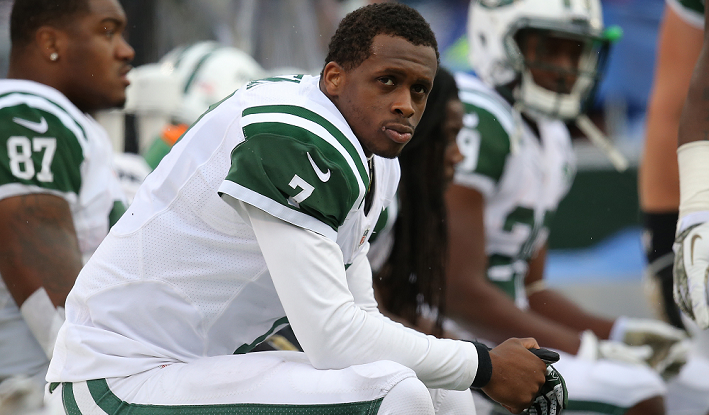 In the backfield, the Jets signed former New England running back Stevan Ridley, who had a massive season in 2012, though hasn’t been as dangerous since then. Still, if he gets sufficient game time alongside Zac Stacy and Bilal Powell in New York’s backfield, Smith could equally have decent options if he decides to run the ball.On top of having better offensive options to work with in the upcoming season, the Jets have a sixth-easiest strength of schedule in the NFL, which should offer also give Smith and Co. some advantage. In fact, Smith could have a decent start, as the Jets face the Browns in Week 1, Colts in Week 2, Eagles in Week 3, Dolphins in Week 4 and Redskins in Week 6 after Week 5’s bye, before they commence a grueling stretch starting with the Patriots in Week 7.Of the 5 games before Week 7’s game against New England, Smith and the improved Jets should at least be able to get the victories over the Browns, Redskins and maybe even escape with a surprise win over the Eagles, if their defense stays strong. 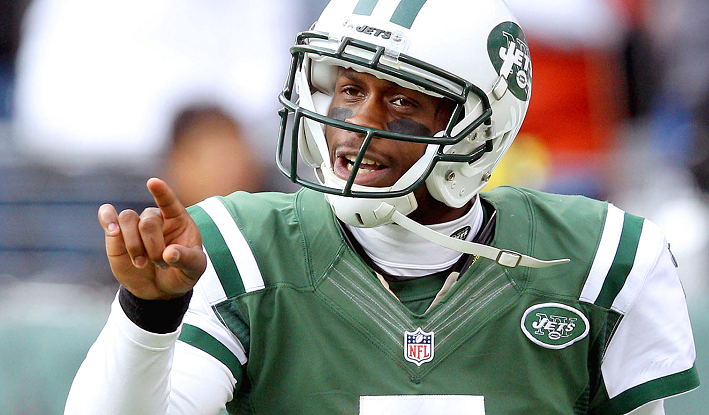 In the realm of season totals, the Jets have opened as the NFL lines as a -145 favorite with a projected win total of 7.5, according to Bovada. With Smith as a starter, a 6-10 looks most likely. So don’t dare wasting your money on the Jets winning the NFC East as +800 long shots because they are most likely to finish last in the division.Sources:ESPN.com: http://espn.go.com/nfl/player/stats/_/id/2466005/bryce-pettyNFL.com: http://www.nfl.com/player/percyharvin/80425/profile
Older post
Newer post