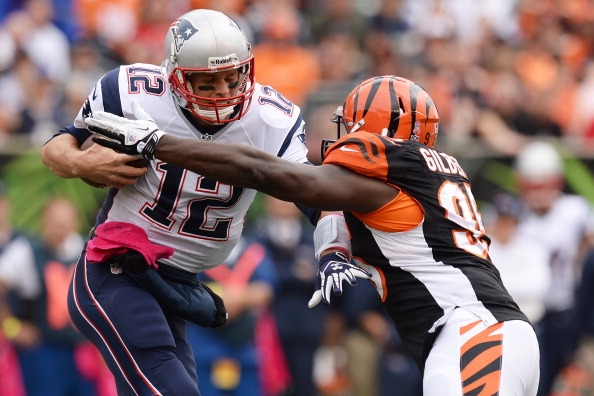 NFL News and Rumors
Week 5 of the NFL is all done, save for the Monday night game between Seahawks and Redskins, and there are some very definite winners and losers to be found after what went down on Sunday. As we move further into the season, it’s time to examine the losers and the teams that shined over the weekend and that are likely to get favorable NFL gambling lines for Week 6. The biggest loser of them all has to be the New York Jets, a team that look about at bad as it gets. Rex Ryan may be the coach with the hottest seat of all, as everything he tries seems to go wrong. For example, he finally pulled QB Geno Smith after another lackluster performance, only to find that backup QB Michael Vick was equally inept. The 31-0 loss to the San Diego Chargers means that the Jets were the first team to get shutout this season, and that puts them in the doghouse entering Week 6, but despite his horrible performance against the Chargers, Jets’ Coach Rex Smith confirmed this Monday that Geno Smith will start the game against the Denver Broncos. Now, let’s check the winners. Beside the Dallas Cowboys, who beat the Texans to move to 4-1, the other team at the top of the winner’s side has to be the New England Patriots. The Pats entered their Sunday Night matchup against the Bengals carrying many doubts from their Week 4 loss to the Kansas City Chiefs. Everyone, Tom Brady and Bill Belicheck included, had the finger pointed at them for their ineptitude in the opening 4 weeks, but the Pats put on a bit of an offensive clinic on Sunday, downing the heavily favored Cincinnati Bengals by a score of 43-17. Another team that has to be branded a winner in Week 5 is the Denver Broncos. Peyton Manning was up to his old tricks, throwing for 479 yards (a career high) and 4 TD’s. He got a ton of help from Demaryius Thomas, who had 8 grabs for 226 yards and a pair of TD’s. Although not quite as overwhelming, you have to give some props to the Dallas Cowboys, as they go to 4-1 on the season after knocking off their state rivals, the Houston Texans. Whether they are actually a contender or a pretender still remains to be seen. Heading back to the losers side, we have to begin with the Atlanta Falcons. They went into New York to face the Giants and once again proved that they seem incapable of playing anywhere other than under the cozy confines of a dome. At 2-3, Coach Mike Smith may be another one who is starting to feel that his seat may be a little warm. The Detroit Lions did not look very good in their home loss to the Buffalo Bills, and the same can be said for the Baltimore Ravens, who fell to a solid Indianapolis Colts squad that limited Baltimore offense to 13 points. It was nice to see Indianapolis win a game without riding on the shirt tails of Andrew Luck. The biggest sigh of relief in Week 5 had to be heard in New Orleans, as the Saints managed to knock off the Tampa Bay Buccaneers in OT. They are now at 2-3, but it looks as though the NFC South is going to go to the team that isn’t quite as bad as the others this season, which means the Saints are still very much alive. Would that help them to improve their lousy NFL Odds to get to Super Bowl XLIX? We gotta wait a few more weeks to figure that out, but in the meantime, let’s just celebrate their return to victory lane.
Older post
Newer post