NHL Betting News
While there is still some work to be done in the Eastern Conference side of the NHL playoffs, the Western Conference Final is now set and ready to go (betting lines are still pending, though.) The Chicago Blackhawks will face the Anaheim Ducks in what many people believe will be the series that decides who eventually goes on to win the Stanley Cup when all is said and done.

Let’s Take A Look At This Western Conferece Matchup

The Blackhawks were the first team to book their ticket into the Western Conference Final, with the Anaheim Ducks getting the job done on Sunday night against a very plucky Calgary Flames squad, who will definitely be a team to look out for next season and beyond. As bravely as the Flames battled, this was a series that pretty much looked like a foregone conclusion from the get go. Calgary has been unable to win in Anaheim for a period stretching back years, so it was tough to see how they were ever going to steal one on the road. 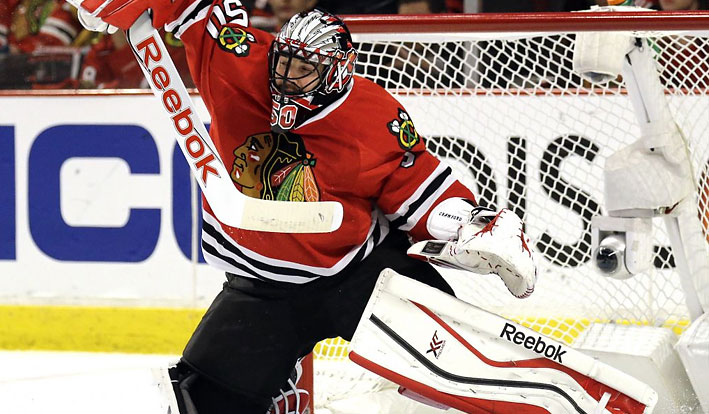 The series win for the Ducks now has them in as the second favorite in the eyes of the bookies, with the Chicago Blackhawks the favorites at this point in the proceedings. This version of the Anaheim Ducks looks a whole lot different than the ones that have come since they won the cup back in 2007. Instead of finding ways to lose, this team seems to always find a way to win. They made a habit of putting together third period wind during the course of the regular season, and then carried that over to the playoff by coming behind three times to beat the Winnipeg Jets en route to a first round sweep, and then doing it to the Flames in the crucial Game 5 on Sunday night. Their top line of Getzlaf, Perry (series winner in OT versus the Flames), and Maroon have been stellar, as has the play of Frederik Andersen between the pipes. The power play came alive versus the Flames, going 6 for 18 during the 5 games, which is something of a surprise when you consider that it finished the regular season on a 1 for 23 run.

Learning by osmosis! Brandon Saad is developing into a two-way player with help from 81 and 19. WATCH: http://t.co/ehTbCZhiew — Chicago Blackhawks (@NHLBlackhawks) May 11, 2015

What Should We Expect Then?

The betting lines for the Ducks/Blackhawks games are sure to be tight, just as they are for the overall odds of these two teams winning the Stanley Cup. This looks like being a great series, and is one that we will cover in depth once it gets underway. SourcesNHL.com (http://video.flames.nhl.com/videocenter/console?id=822012&lang=en)ESPN.com (http://espn.go.com/nhl/player/_/id/2517899/frederik-andersen)
Older post
Newer post