NHL Betting News
The conference finals in the NHL are now underway, but it’s fair to say that the vast majority of interested eyes are pointed west. The general online betting consensus is that whoever wins the series between the Anaheim Ducks and the Chicago Blackhawks will be the team that eventually goes on to win the Stanley Cup. If that is indeed the case, then it’s advantage to the Ducks, as they skated away with a 4-1 win in Game 1. The second game in the series is set for Tuesday night in Anaheim.

Time: Tuesday, 9 p.m. ETVenue: Honda Center, AnaheimNational TV: NBC Sports NetworkOpening line: Ducks -130, Blackhawks +118 (5 goals)The Ducks have certainly looked the part to this point in the playoffs, and are now 9-1 overall after their win in Game 1. Anaheim is the top scoring team in the postseason, averaging close to 4 goals per game. A big part of their success has been their output on the power play, which was at 31% coming into the Western Conference Final. They failed on their lone attempt in Game 1, but didn’t really need it, as they has more than enough offensive output to deal with the Blackhawks. The Getzlaf/Perry/Maroon line has been outstanding so far, and Chicago must be a little concerned that they were able to keep those guys off the score board, other than a lone assist for Getzlaf, in Game 1, yet still lost. 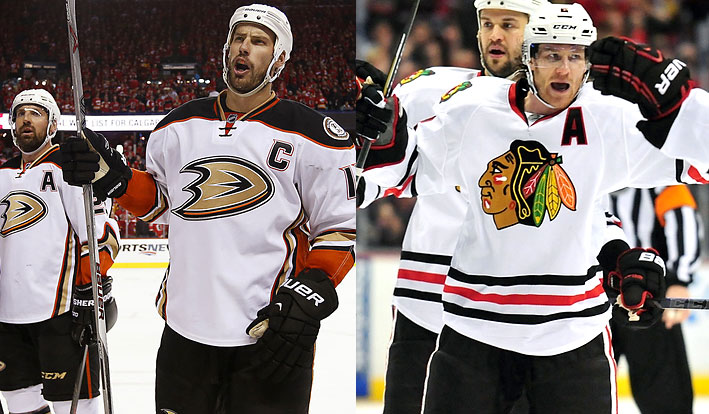 The Blackhawks certainly had their opportunities in the opening game, but they ran into a goaltender, Frederik Andersen, who has been carrying a hot hand all through the playoffs. They also had 3 power play attempts, but failed to capitalize on any of them. They will be well aware that this series is far from over, but they are going to have to try and find a way to steal Game 2, as going home down 0-2 might just be too big a hole to get out of against a very well organized Ducks team. The Blackhawks Achilles heel to this point in the playoffs has been their penalty kill, so they are going to have to stay disciplined and limit the number of power play opportunities the Ducks get. The Hawks are the second top scorers in the playoffs, so they definitely have the fire power to get back into this series.

The Ducks have yet to lose a game on home ice in these playoffs, and that is a huge problem for Chicago. While Game 2 is not necessarily a must win, it’s one that they would really like to have before heading home. I thought this series was destined for 7 games, but after seeing Game 1, I’m not so sure. I think the Ducks head to Chicago with a 2-0 series lead. SourcesNHL.com (http://www.nhl.com/gamecenter/en/boxscore?id=2014030321)ESPN.com (http://espn.go.com/nhl/player/_/id/2517899/frederik-andersen)
Older post
Newer post