NHL Betting News
The parity level of the NHL is such that it was difficult to look at the first round playoff match-ups and find one that would likely end in a sweep. If there was one that showed real potential for a rout, it was the series between the New York Rangers and the Pittsburgh Penguins. After all, the Rangers looked great all year en route to the President’s Trophy, while the Penguins had to wait until the final night of the regular season to book their Wild Card ticket. NHL betting for game 4 of the series, which the Rangers lead 2-1, is set for Wednesday night in Pittsburgh.

Date: Wednesday, April 22, 2015Time: 7:00PMVenue: Consol Energy CentreOpening Line: Rangers -115The last time the Rangers nabbed the President’s Trophy for the best regular season record was back in 1994, which just so happens to also be the last time they won the Stanley Cup. The big difference here is that very few people see them as a serious threat to go all the way this time around. While they would love to prove all the naysayers wrong, the fact of the matter is that they have huffed and puffed their way to a 2-1 series lead against the one team that everyone thought they would have no problem handling. Each of the 3 games in the series have been decided by a single goal, and the Penguins even managed to steal a win on the road, although they have back home ice advantage by losing their first game at home. 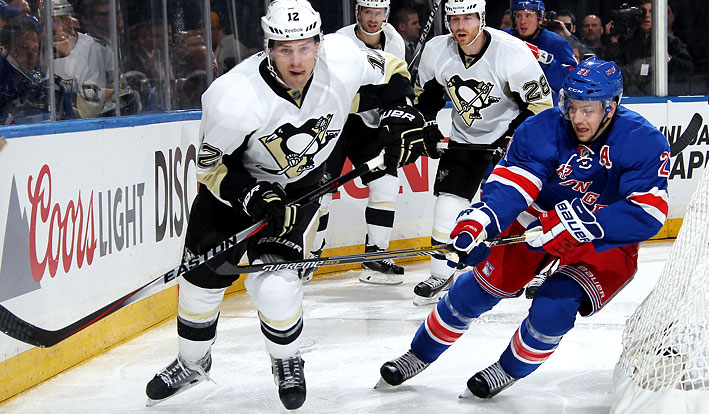 There were few people outside the city of Pittsburgh who believed that the Penguins had any sort of chance against the Rangers. Even die-hard fans in the Steel City must have had some serious doubts, as they watched their team win just 4 of their last 15 games of the season to essentially back their way into the playoffs. Pittsburgh have been something of a surprise to this point, though, and have more than held their own against the regular season champs. That said, they really need a win on home ice if they have hopes of extending this series beyond 5 games, as I just don’t see the Rangers passing up the opportunity to close things out at home.

I believe Game 4 will follow the trend currently being set in this series, which means it will be another tight affair. I like the Penguins to get the win, and would not be surprised if this thing ends up going the full 7 games.
Older post
Newer post