NHL Betting News
Stealing away home ice advantage in the playoffs is the goal of every team who has to start a series on the road. In the case of the Chicago Blackhawks, that theft was all the more invaluable given that they have yet to lose at the United Center this postseason. That all changed on Thursday night when the Anaheim Ducks came to town for Game 3 of the Western Conference Final and immediately stole the advantage right back. What is NHL betting on Game 4 looking like? Let’s find out.

There were some who felt that the triple OT loss on home ice would have a negative effect on Anaheim, but if it did, they certainly were not showing it. They came out flying, and were very good value for their first period lead through a Patrick Maroon goal. They could easily have hit the panic button when Patrick Kane tied things up in the first, but an early second period goal from Simon Despres gave them a lead that they never relinquished. The Ducks essentially shut the door after they got the lead for the second time. It wasn’t so much a backs against the wall defensive effort as it was a controlled, stifling sort of defense that was designed to frustrate the Blackhawks, whilst opening the door for the counter attack. What the Ducks showed in Game 3 was that they can beat you a 100 different ways if they want to. 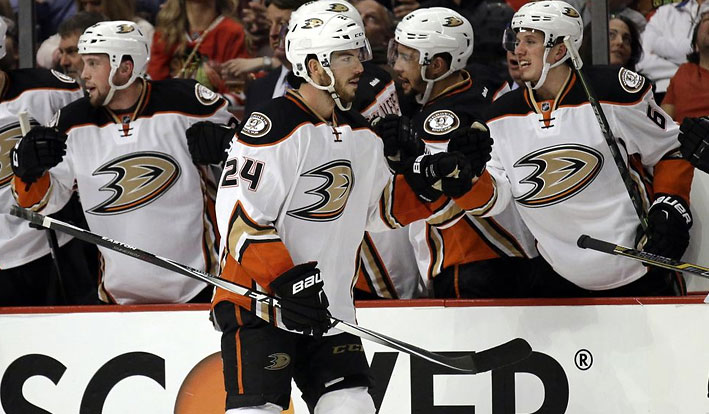 Blackhawks fans were a little confused before the puck even dropped for Game 3, as they found out that Coach Joel Quenneville had dropped Antoine Vermette and Teuvo Teravainen from the lineup. Both were listed as healthy scratches, so it’s not as if minor injuries were the problem. Sure, all of these guys had played the equivalent of almost 2 full games just a couple of nights before, but everyone is playing hurt and tired at this time of the season. This is not to say that the omission of these two guys was the sole reason for the outcome, but there is something to be said for rolling out the same guys that got you were you are now.

It may still only be 2-1 in the series, but you get the sense that the Ducks are now in complete control. Another win in Game 4, and there is every chance that Anaheim closes out the series when they head back home. The Hawks still have a lot of fight in them, though, and I think they will tie things up on Saturday. SourcesNHL.com (http://www.nhl.com/ice/player.htm?id=8474141)ESPN.com (http://espn.go.com/nhl/player/_/id/1939/antoine-vermette)
Older post
Newer post