NHL Betting News
It’s hard for current NHL betting fans to imagine a National Hockey League that only had six teams that kept traveling back and forth on trains to play one another. The New York Rangers, Boston Bruins, Montreal Canadiens, Toronto Maple Leafs, Detroit Red Wings and Chicago Blackhawks were it until the league finally expanded in 1967. Over the history of the league, each generation has had its own dominant players. Here is a look at some of the greatest players from each segment of the league’s history.

Called “The Rocket,” Richard played for 18 seasons with the Montreal Canadiens. He was the first NHL player to score 50 goals in one season – doing it in 50 games during the 1944-45 campaign. He was also the first to reach 500 career goals. When he retired in 1960, he had more goals than anyone else with 544. He was on 14 NHL All-Star teams and was the captain of eight Stanley Cup champion teams, including five in a row between 1956 and 1960. The Hockey Hall of Fame usually makes players wait five years after retirement before they are eligible for consideration, but they waived that in his case, inducting him in 1961. The Canadiens retired his number (9) immediately after he retired. When he died in 2000, the province of Quebec made him the first non-politician honored with a state funeral.

Known as “Mr. Hockey,” Gordie Howe played professional hockey from 1946 to 1980, playing his last game when he was 52 years old in the World Hockey Association. He spent his first 25 seasons with the Detroit Red Wings. He made it to the All-Star game 23 times and held most of the league’s records for scoring until Wayne Gretzky came along in the 1990s. He is still the record holder for the most games and most seasons played in the NHL. He led the league in scoring from 1950 to 1954 and ranked in the top 10 in the league for 21 straight years. He won four Stanley Cup titles and six Hart Trophies as the league’s MVP. He won six Art Ross Trophies for being the league’s leading scorer. He retired for the first time in 1971 and entered the Hockey Hall of fame the next year. However, he came back to play with his sons Marty and Mark on the Houston Aeros of the World Hockey Association. He was already in his mid-40s, but he still scored more than 100 points in two of his six seasons there. He was the first to receive the NHL Lifetime Achievement Award in 2008. 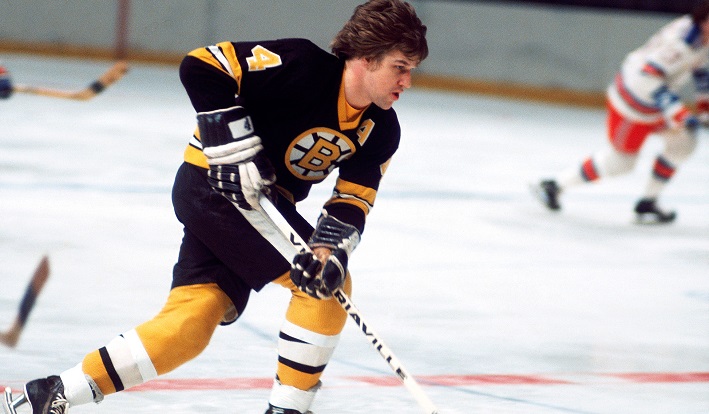 While Orr made his mark as a defenseman, the Boston Bruins first tried him out as a center, but quickly found that he would help the team most as an offensively minded blueliner. The Bruins would win Stanley Cups would win Stanley Cups in 1969 and 1970 thanks to Orr, and he made the team a powerhouse offensively. In the 1970-71 season, Orr would set the record for plus-minus at +124 for the season – a record that still stands today. They won another Stanley Cup in 1972 and made it back to the finals in 1974, losing to the Philadelphia Flyers. After the 1974-1975 season, Orr became a free agent, and the talks between Orr and the team became controversial. Orr had long struggled with knee issues, and the team couldn’t get insurance for the new contract. Bobby Orr ended up in Chicago, but he only played 26 games there over three seasons because of knee injuries. He retired with 270 goals, 645 assists and 953 penalty minutes. He was inducted into the Hockey Hall of Fame at 31. Sources: Wikipedia.org (https://en.wikipedia.org/wiki/Gordie_Howe) NHL.com (http://www.nhl.com/ice/player.htm?id=8450070)
Older post
Newer post