The hockey playoffs are so frenetic and high paced that there is never really a moment to relax. The only time that a team starts to get a little comfortable is when they steal a game on the road to get home ice advantage back. If they can win two on the road, their NHL odds of making it to the next round increase dramatically. The Tampa Bay Lightning won both road games in their second round series versus the Montreal Canadiens, but you can bet that taking it easy at home is the furthest thing from their mind.

The Lightning and Habs are stuck playing back-to-back nights even though the arena is free http://t.co/fzBtqZgu2s pic.twitter.com/2G1oP8p53n

In something of a playoff anomaly, the Lightning and Canadiens will play back to back games on Wednesday and Thursday night. That’s a tough ask at this stage of the season, with players having to battle through pain and fatigue in their quest for the cup. If Tampa Bay are able to take the game on Wednesday night, which I think they will, we will be looking at the potential for a sweep and some rest heading into the Eastern Conference Final. It is that few days off that is one of the biggest rewards a team can get at this time of the season, and Tampa Bay will have certainly earned it. Their 6-2 win in Montreal in Game 2 was about as complete a performance as they have put in so far this postseason, and it makes you wonder what Montreal can do to get back in this series. 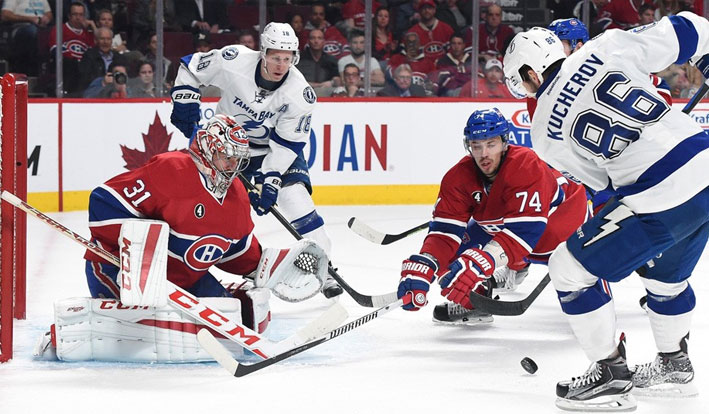 There was a definite sense that the life was sucked out of the building when Nikita Kucherov bagged the double OT winner in Game 1. The Canadiens fans and players looked absolutely stunned, and seemed to carry that over into Game 2. Montreal had compiled the best goals against record during the regular season, so it was a real surprise to see them give up 6 in that second game. Even die-hard Habs fans were left feeling as though their chance to move on had been snatched away. There were signs that Montreal might be in trouble in the first round, as they allowed the Ottawa Senators back into a series that should have been won a whole lot earlier than it finally was.

A win on Wednesday night would help Montreal get back into the series, but putting together road wins on consecutive nights is a tough task at any time in the season, never mind the playoffs. I believe this series was done after Game 2, and I think the Lightning will close things out on home ice on Thursday night. SourcesNHL.com (http://www.nhl.com/ice/series.htm?series=M)ESPN.com (http://espn.go.com/nhl/player/_/id/2563060/nikita-kucherov)
Older post
Newer post