NHL Betting News
The worst place you can be in a 7-game series is down 3-0. There are a couple of options left to teams that find themselves in this position: they can choose to roll over and die in Game 4, or they can try to find a way to chip away at the deficit. The Montreal Canadiens have decided to go the latter route, and will head to Tampa Bay on Tuesday night for some Game 6 online sports betting action. Could the Canadiens take the opportunity to tie things up at 3?

Date: Tuesday, May 12, 2015Time: 7:00PMVenue: Amalie ArenaOpening Line: Montreal -150There were very few people who saw this comeback coming, as the Lightning had pretty much outplayed and outcoached Montreal through the first 3 games of the series. Even when Montreal romped to a 6-2 victory in Game 4, the feeling was that it was nothing more than a consolation prize. Their 2-1 win in Game 5 was an eye-opener, though, as Carey Price found a way to get back to the form that made him the best goaltender in the NHL all season long. If he can get hot now, the Lightning could be in a pretty tough position. Only 4 teams in the history of the playoffs have come back from 3 games down, so the odds are still stacked heavily against the Canadiens, especially with that crucial 6th game coming on the road. 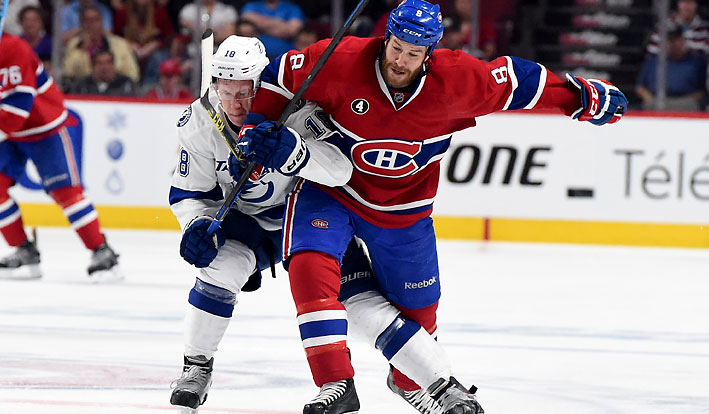 The Tampa Bay Lightning are paying the penalty for taking their foot off the gas in Game 4. They could have been well rested and sitting back watching the Rangers and Capitals punish each other for 7 games, but instead they are now heading home with pressure on them that simply wasn’t there a few short days ago. The one thing that goes in the favor of the Lightning is their ability to score goals seemingly at will. They were the highest scoring team in the regular season, but they didn’t have to face a guy like Carey Price every night. The penalty kill unit has been solid through the first 5 games, giving up only 1 goal, but the power play unit is going to have to become as good as it was in Game 2 when it went 4 for 8. If the Lightning can in the special teams battle, they should win the series.

It has been fun to see a series that looked dead come back to life, but I think the fun comes to an end on Tuesday night in Tampa. The Lightning are done toying with the Canadiens, and should be more than good enough to deliver the fatal blow on home ice. SourcesNHL.com (http://www.nhl.com/ice/player.htm?id=8471679)ESPN.com (http://espn.go.com/nhl/team/_/name/tb/tampa-bay-lightning)
Older post
Newer post