NHL Betting News
There’s an old saying about things not being over until the fat lady sings. If there were any truth in that, you can bet that every larger lady in the Chicago area would be warming up their voices in preparation for Game 4 of the series between the Chicago Blackhawks and Minnesota Wild on Thursday night. The Blackhawks have a chance to bring this series to an end in front of what is sure to be a rabid home crowd on Thursday. What do the NHL lines look like for the match? Lets find out.

Date: Thursday, May 07, 2015 Time: 9:30PM Venue: Xcel Energy Center Opening Line: Minnesota -131 Chicago certainly has history on their side, as only 4 teams have ever been able to claw their way back from an 0-3 hole. The Blackhawks seem to be hitting their stride at just the right time after winning a hard fought series against the Nashville Predators in the opening round. They are now starting to play the sort of stifling defense that saw them have the second best defensive record in the NHL during the regular season. After winning the opening game of this series 4-3, the defense has grown increasingly stingy, giving up just 1 goal in the next 2 games. That included a 1-0 shutout win in Game 3, with Corey Crawford making 30 saves to keep out the Wild. The goal that may have finally broken the resolve of Minnesota came from Patrick Kane via the power play, which Chicago has been struggling with throughout the playoffs. 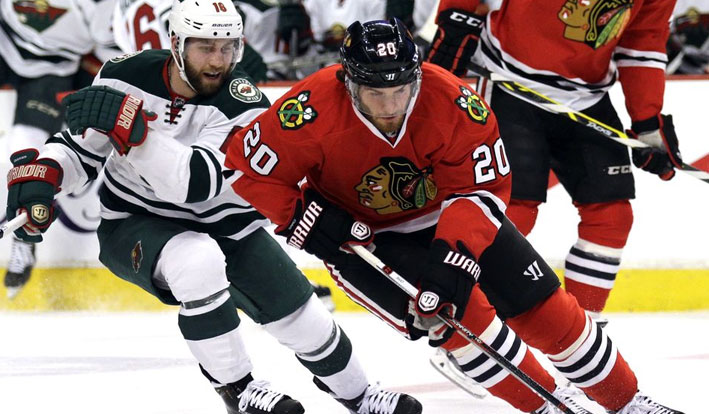 Other than a single game during the opening round, the Minnesota Wild had been putting on a defensive show. That all came apart somewhat in the opening 2 games of this round, as the Blackhawks were able to find the net 4 times in each of the first 2 games. The Wild got things corrected when they returned home, but it was the offense who let them down in Game 3, failing to capitalize on 30 shots and 3 power play opportunities. The Wild will still talk about having a shot if they win Game 4, but that history we mentioned earlier very much suggests otherwise.

A series comeback begins with a single win and a shift in momentum, but I just don’t see that happening here. The Blackhawks look to be in the zone right now, and as nice as it would be to kill of the series on home ice, they will want to get the job done as quickly as possible. I believe the sweep gets completed on Thursday.   Sources NHL.com (http://www.nhl.com/ice/player.htm?id=8470645) ESPN.com (http://espn.go.com/nhl/team/_/name/min/minnesota-wild)
Older post
Newer post