NHL Betting News
The Western Conference Final has been one of the hardest fought series in recent memory, with OT needed in 3 of the 5 games played to date. The series in now down to a best of 3, with the Anaheim Ducks holding a 3-2 series lead over the Chicago Blackhawks. Game 6 back in Chicago on Wednesday is now a must-win for the Blackhawks, while the Ducks can take the next step in their quest for Lord Stanley’s Cup. The Blackhawks are favorites on NHL odds for the match.

Time: Wednesday, 8 p.m. ETVenue: United Center, ChicagoNational TV: NBC Sports NetworkOpening line: Blackhawks -137, Ducks +124 (5 goals)The Ducks came out fast in Game 5, and were 3-0 up in the first period, and seemingly on cruise control. Anaheim let Chicago back into this one, though, and a pair of goals from Jonathan Toews in the 3rd period took this one to overtime, which is not a huge surprise, given how this series has gone. One thing that has been somewhat surprising has been the play of the Ducks second line. While the Blackhawks have been putting the majority of their attention in the Perry/Getzlaf/Maroon line, it has been Matt Beleskey and his line mates who have been doing much of the damage in this series. It was Beleskey who came up with the OT winner, which was his second goal in consecutive games. Beleskey was a major force in the previous round versus the Calgary Flames, and now has 7 goals in the postseason, which puts him just 2 behind Corey Perry. 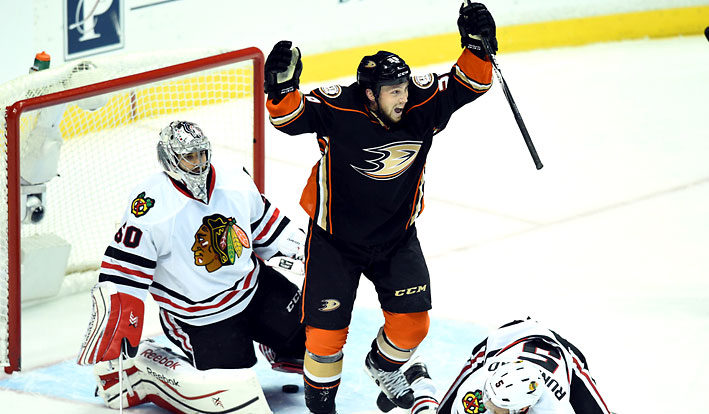 The Blackhawks simply cannot afford to allow Anaheim to get off to another fast start in Game 6. The good news is that Chicago has been very good at home, where they have won 7 of their last 10 games. They also have guys that can put the puck in the net, with Toews and Patrick Kane accounting for 9 goals each in the playoffs. Kane may well be the man to watch on Wednesday night, as 6 of his 9 postseason goals have come on home ice. There is some talk that Corey Crawford may not get the start in net for the Blackhawks on Wednesday, as he has not looked particularly good in the last 2 games of the series. The thought of starting a rookie in a must-win playoff game makes me believe that it will be Crawford who will get the start.

This is a series that always looked as though it would go the full 7 games, and if you are a fan of great hockey, that is something you are probably hoping for. I think we will all get what we wished for here, as I think Chicago will win and take it back to Anaheim for Game 7. SourcesNHL.com (http://www.nhl.com/ice/player.htm?id=8473492)ESPN.com (http://espn.go.com/nhl/player/_/id/3735/patrick-kane)
Older post
Newer post