NHL Betting News
There are few sporting events more exciting than a Game 7 of a series in hockey. As much as teams and their fans would love to avoid such pressure, fans will also admit that the thrill of a 7th game is something that is tough to beat. One series in the opening round of the Stanley Cup playoffs that looks destined to go the distance is the one between the Minnesota Wild and the St. Louis Blues. Those interested in doing some NHL betting today should know the series is tied at 2-2, and will head back to St. Louis on Friday night.

Date: Friday, April 24, 2015Time: 8:00PMVenue: Scottrade CenterOpening Line: St Louis -1.5The series started in St. Louis, where the Blues quickly found themselves behind the 8-ball with a 4-2 loss in Game 1. They got a much needed win in Game 2, and seized back home ice advantage by thumping the Wild 6-1 in Game 4 in Minnesota. The star of the show for St. Louis to this point has been Vladimir Tarasenko, who has 5 goals and an assist through the first 4 games. The highlight of those performances was a hat-trick that the second year right winger scored in the second game of the series. He followed that up with another pair of goals in Game 4, and it appears that the Blues see, to be going as he does. Despite the big win on the road, the Blues will still be under pressure to get the win on Friday before heading back to Minnesota for Game 6. 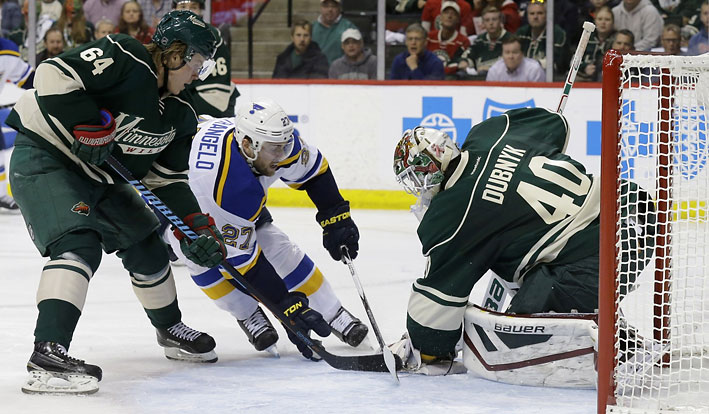 The Wild let a golden opportunity slip away by losing the home ice advantage that they had wrestled away from the Blues in Game 1. They will be particularly disappointed at the way in which they lost that last game, as this has been a series where Minnesota has played very well defensively. They have also been very good on the penalty kill allowing just one PP goal in 7 attempts. The Wild will be looking to Devan Dubnyk to get back to the goaltending form that saw him post a shutout in Game 3 of the series. Dubnyk got the hook in Game 4 after giving up 6 goals on just 17 shots. He will need to be at his very best when the series switches back to St. Louis on Friday.

This is a series that has swung back and forth from the start, but I think the Blues got some real momentum with their blowout win in Game 4. I like them to win this one, too, but not by as big a margin as the last game.
Older post
Newer post