NHL Betting News
There was always a sense that the Western Conference Final between the Anaheim Ducks and the Chicago Blackhawks would be a close one, but no-one could have predicted the events of Game 2. It took almost 6 full periods of hockey to separate the two teams, with the Blackhawks scoring a triple OT winner to tie up the series as they head back to Chicago for Game 3 on Thursday night, where the Blackhawks are NHL betting favorites at -130.

Date/Time: Thursday, 8 p.m. ET Venue: United Center, Chicago National TV: NBC Sports Network Opening line: Blackhawks -130, Ducks +118 (5 goals)It is hard to put into words exactly what happened on Tuesday night in Anaheim, as to do so would require a lot more space than I have here. The Chicago Blackhawks came into Game 2 knowing full well that they would be in a very deep hole if they went down 0-2. They came out on fire, and totally dominated the proceedings in the first period. They were full value for the 2 goals that they scored inside the first six minutes, but they also knew that the Ducks were going to push back hard. The Blackhawks were outshot 19-7 in the third period, and really did look as though they were hanging on for dear life at times. Once Anaheim got level and took things to OT, we were then treated to a back and forth game that was an absolute joy to watch. 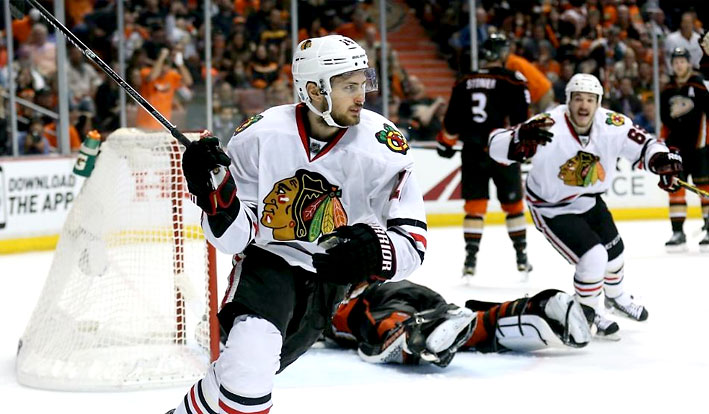 The Anaheim Ducks have to be wondering how they are heading to Chicago with the series tied 1-1. I lost count of the number of times I heard that all too familiar ding of puck hitting iron, as Anaheim rattled the post and crossbar time and again. That said, they did survive a major scare in the second OT period, when it looked as though Andrew Shaw of the Blackhawks had scored the game winner. The replay showed what has to be one of the strangest moments in Stanley Cup history, with Shaw heading the puck, soccer style, into the back of the net. The goal was disallowed after a review. The end eventually did come when Marcus Kruger shoveled home a loose puck in the crease late in the third OT period.

The Rangers and Lightning must be watching this series and rubbing their hands with glee, as these two teams are laying everything on the line to get the win. If this things goes 7, there is going to be one worn out team heading to the final. Game 3 is going to be a big one, and I think the Ducks will steal back home ice advantage with the win.   Sources NHL.com (http://ducks.nhl.com) ESPN.com (http://espn.go.com/nhl/team/_/name/chi/chicago-blackhawks)
Older post
Newer post