NHL Betting News
Overtime is fairly rare in three of the four major American sports, particularly in the postseason. In the NBA, teams pour so many points into the basket during a game that it seems like the teams almost never end up exactly even, especially in a clinching game of a series. The fact that the points come in twos and threes unless you’re dealing in free throws makes it as likely as not that you’ll end up on one end of a tight gap rather than level. Scoring in the NFL happens in point increments that don’t easily line up near the ends of games a lot of the time. It’s true that one NFL championship went to sudden death overtime and earned the nickname “The Greatest Game Ever Played.” But that title game was in 1958. The Super Bowl era hadn’t even started, and we’re almost up to 50 of those – and none have gone to overtime. Let’s review why playoff overtime is the most exciting for NHL betting fans.       Major League Baseball often sees games go to extra innings. There is a lot of drama in watching teams play another inning (go back to the 2011 World Series between the Texas Rangers and the St. Louis Cardinals, when the Rangers coughed up not one but two leads against the Cardinals to send the game further and further into the night). Hockey, on the other hand, has an ebb and flow that matches basketball in terms of speed of pace, but a scoring system that’s closer to football or soccer in terms of frequency. You can work really hard as a team and end up with no goals for it, just like a team can keep driving from its own 10 to the opponents’ 40 and keep having to punt while shutting the other side down on defense. At least in football, though, you have the option of the field goal if you can’t get to the end zone. In hockey, you either put up a point with a goal, or you go away with nothing on the board. And while the other sports generally require some buildup to get to the very end of the game in overtime, except for that one fat pitch that gets hammered out of the park for a walk-off home run, hockey overtime comes to such a swift end after such drama that it is an emotionally explosive – or implosive – event for the teams involved. The physical effort that goes into playing three periods of hockey to put together a full playoff game is already draining, but the overtime periods are exhausting for fans and players alike. 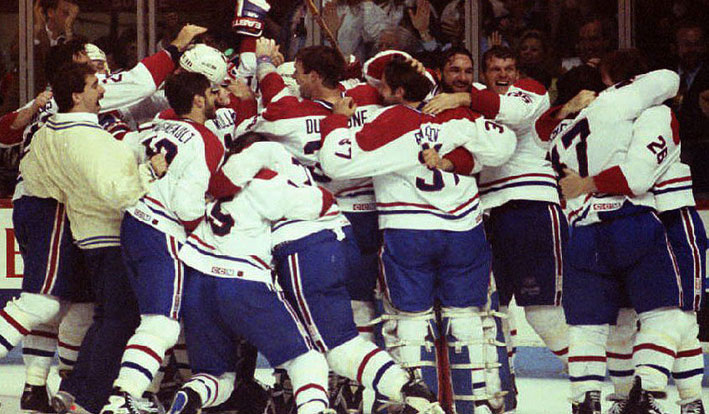 Overtime hockey is often the stuff of legend. In 1936, Detroit and the Montreal Maroons squared off in a game that featured six overtime periods and lasted 176 minutes and 360 seconds of playing time. In 1993, the Montreal Canadiens won 10 straight overtime tilts during that postseason, beating the Los Angeles Kings for the Habs’ most recent Stanley Cup title. The whole game becomes more intense, all the way around. The people who score are rarely the people you expect to score, such as the time Buffalo center Dave Hannan got a puck by Devils goalie Martin Brodeur in Game 6 in their 1994 playoff series. The game was in its fourth overtime period, and the game had already featured 119 shots on goal to that point. Hannan had only scored six times in the 82-game regular season. Players just start shoveling the puck at the net time and time again, thinking that this time it will bounce in. When it does, the night is electric. Until then, the pressure is intense. Sources: Hockey-reference.com: http://www.hockey-reference.com/teams/MTM/ Hockeydb.com: http://www.hockeydb.com/ihdb/stats/pdisplay.php?pid=2137
Older post
Newer post