Tennis Betting News
World No. 10 Rafael Nadal may not be back to his blistering best, but he is certainly on his way back to the top.Having already lost to 32nd-ranked Fabio Fognini twice this year, including the major upset in the Rio Open in February (when Fognini won 7-5 in the third to break the Spaniard’s astonishing 52-match unbeaten run in clay-court semi-finals), many tennis betting fans expected the Italian to upset the odds once again when the two foes clashed on the red dirt in the Hamburg Open Finals on August 2nd.But Rafa had other ideas, putting a championship-worthy performance to claim this third title of the year. The win was however far from an easy one, as Fognini rallied back in the second (after Nadal had won the first set), forcing the nine-time French Open champion to save two set points before claiming a hard-earned 7-5 7-5 win.

Rafa Overcomes AdversityNot long ago, Rafa was virtually unbeatable on the clay, with Novak Djokovic being the only person to stake a claim on having beaten the Spaniard twice on the red dirt. But since he returned from the wrist injury and appendectomy that dwarfed his second half of the 2014 season, Nadal’s struggles were evident on the court, a key reason behind the two upset wins by Fognini over him earlier this year.But with the Hamburg win, his first decently sized tournament title win of the year, there can be hope that Nadal could be on his way back up to the top-5 rankings, the place where he rightfully belongs to.Of course, it has taken nearly eight months, 15 whopping tournaments, a seven-spot drop in the World Rankings from No. 3 to No. 10 and three huge Grand Slam disappointments to get the Hamburg Open victory, so we don’t expect him to shoot up the rankings easily. Nonetheless, with the lessons he’s learnt and his fitness coming back in a good way, a progressive rise in the rankings should be very possible, considering the win over Fognini saw Nadal move from No. 10 to No. 9 in the rankings.“It’s particularly satisfying for him to defeat Fognini, commented Sky Sports tennis expert Mark Petchey on Nadal’s recent tough win. “If you wipe the floor with someone it’s great but it’s also important to tough out a difficult match.”Petchey additionally said, “If you choose to see the glass as half empty, you could say Rafa is still fragile and should have coasted. My attitude is that he got through a tough set which was easy to lose.” 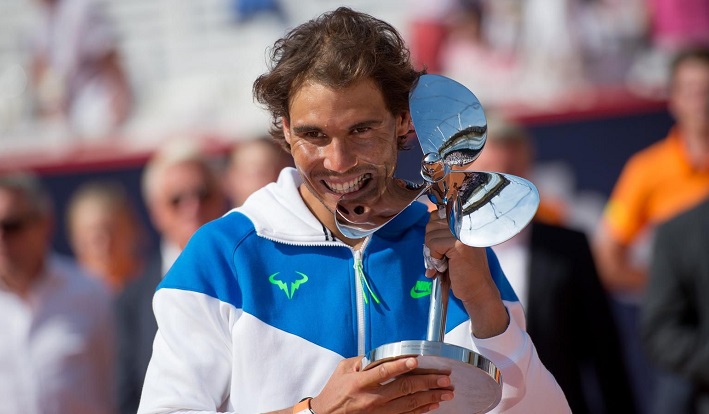 The Mountainous Road to the US OpenThere isn’t much time for Nadal to soak into the celebrations because the road ahead of him is even tougher, necessitating a lot of hard work and resilience. A week from now, Rafa will be back on the court, precisely the hard-court, for the ATP 1000 tournament in Canada, which will be immediately followed by another 1000 event in Cincinnati. And a week after the Cincy event, the mighty U.S. Open will be getting underway.Evidently, Rafael Nadal needs a lot of preparations and has a lot of bumps to flatten, as he seeks to get ready for the US Open. Beating Fognini and a couple of players before the US Open will especially be important in getting his confidence levels up, preparing him mentally for the usual juggernauts in the US Open. It is a tall order from here onwards, and with the tasks at hand, it won’t be easy, but knowing Rafa and his knack for offering pleasant surprises, it wouldn’t be a shocker if he pulled out another rabbit out of his laden bag of Tennis skills.Sources:Twitter.com (https://twitter.com/markpetchey)Wikipedia.org (https://en.wikipedia.org/wiki/Rafael_Nadal)
Older post
Newer post