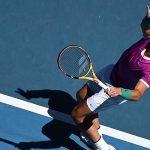 MyBookie is back with ATP 2022 Australian Open daily update. As always, we will look at the most recent events on the Melbourne tennis courts and check which tennis players lived up to the expectations, who fell flat, and who made it one step closer to the coveted trophy.Here is everything you need to know about the 2022 Australian Open results, providing you with all the information you’ll need to place intelligent bets with the Australian Open Betting Odds. At MyBookie you can bet, check and compare AFL odds and lines for all regular season Aussie Rules matches, plus future bets and props on the annual playoffs and championship round. What are you waiting for? Sign up for a free account and let the action begin!

The AFL Finals series are upon us, wrapping up one of the most closely contested seasons in recent memory. Geelong earned the top spot on the ladder with 72 points, but Melbourne, Sydney, and Collingwood had to go to a tiebreaker as they all finished bunched up for the two through five seeds.

Carlton was the hard-luck loser of last week’s regular-season finale, finishing in ninth after a one-point loss to rival Collingwood. The Blues’ season is over, but let’s focus on the teams who still have grand finals aspirations so you can continue betting against the AFL Odds.

Brisbane is the lone home team that isn’t an overwhelming favorite in the qualifying round of the finals, but they do have the advantage that the home team has won eight of the last nine head-to-head games in this series. The Lions don’t exactly come into this contest with momentum, though, suffering a 58-point loss to Melbourne in the finale.

Richmond, on the other hand, is hot as winners of four straight. Brisbane finished the season six points higher on the ladder, but Richmond is favored on the road due to their recent strong play.

Sydney has won seven in a row, but they face a very tough test as underdogs at MCG. The away side has won eight of the last 11 in this series which gives the Swans some hope, but Melbourne is coming off a big 58-point win over Brisbane in the regular season wrap-up.

The two teams finished tied with 64 points on the ladder, so the odds discrepancy is somewhat surprising here. The Dees are the defending Premiership winners, though, so they know how to pull out victories this time of year.

It’s a rough draw for Collingwood up against the ladder-leading Cats in the qualifying opener as this is a matchup of two of the hottest teams in the AFL. Geelong is the winner of their last 13 matches to close out the season, but the Magpies are nearly just as hot coming out victorious in 12 of their last 13.

Geelong lost only four games all season, and they’re experienced making their seventh straight trip to the finals.

Either Fremantle or the Bulldogs will see their season end on September 3rd. The Dockers made a run at the top four as winners of their last three of the regular season, but they ended up two points short of Collingwood on the ladder.

That still lets Fremantle avoid a qualifying matchup with Geelong, and it lets the Dockers host this game against the Dogs, who barely edged out Carlton for the last finals spot.

We shall see if the excitement of the regular season carries over into the finals round.

Posted: Wednesday, August 24, 2022 1:25, EDT
The AFL Finals series are upon us, wrapping up one of the most closely contested seasons in recent memory. Geelong earned the top spot on the ladder with 72 points, but Melbourne, Sydney, and Collingwood had to go to a tiebreaker as they all finished bunched up for the two through five seeds.  Carlton was the hard-luck loser of last Read More

Posted: Wednesday, August 17, 2022 3:05, EDT
We head into the final round of the 2022 AFL schedule with Geelong clinching the top spot during the regular season with a 17-4 record. From there things get a little wild though as Sydney, Melbourne, Brisbane, and Collingwood all sit at 15-6 while Fremantle is 14-6-1.  There’s scenarios to play out up and down the ladder this week, as Read More

Posted: Wednesday, August 10, 2022 11:23, EDT
It’s the penultimate week of the AFL season as the league heads into round 22 play. While the top of the ladder is close with Geelong holding a one game lead over Collingwood, it’s further down in the standings where things really get interesting.  Three teams are within a game in the win column of taking home the last spot Read More

Posted: Wednesday, August 3, 2022 12:07, EDT
There are just three matches left before the 2022 AFL Finals, with each one seemingly a must win for teams at the top of the ladder. Geelong continues to hold the top spot at 15-4, but somebody is going to drop as 14-5 Melbourne and 14-5 Collingwood square off in the premier contest of the weekend.  There are a couple Read More

Posted: Wednesday, July 27, 2022 2:58, EDT
With just four rounds left in the AFL regular season the top of the ladder is still anybody’s to claim. Geelong (14-4) has the lead but Melbourne, Brisbane, and Collingwood are all right in the hunt at 13-5 while 12-5-1 Fremantle could still make a run as well.  Melbourne vs. Fremantle highlights round 20 action, but there are upset opportunities Read More

Posted: Wednesday, July 20, 2022 2:57, EDT
The 2022 AFL continues to be one of the more competitive ones in recent memory. Heading into round 19, there are seven teams still within just two games of the top spot in the ladder.  Geelong and Melbourne are both still tied atop the ladder with 52 points. They should each cruise to victories in round 19, but the point Read More

Posted: Wednesday, July 13, 2022 12:22, EDT
We are in the midst of one of the tightest AFL seasons in recent memory with every week seeming like a make or break for multiple teams. That’s no different heading into round 18 as six squads are within a game of the top spot in the ladder.  There are only two matchups between top eight teams as part of Read More

Posted: Wednesday, June 29, 2022 12:53, EDT
What a crazy weekend AFL Round 15 was. Melbourne topped Brisbane in a battle of two teams tied atop the ladder, and Freemantle missed out on their opportunity to stay in the #1 seed with an upset loss to Carlton. Geelong and Sydney also picked up wins as part of a huge triple-header on Saturday.  Now that everyone has had Read More