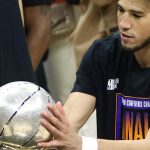 On October 19, the National Basketball Association tipped off what promises to be another great season of hoops action. The Milwaukee Bucks dominated the Brooklyn Nets 127-104 and the Los Angeles Lakers fell to the Golden State Warriors 121-114. From those two games to April 10, teams will fight to win their respective conferences.

On October 19, the National Basketball Association tipped off what promises to be another great season of hoops action. The Milwaukee Bucks dominated the Brooklyn Nets 127-104 and the Los Angeles Lakers fell to the Golden State Warriors 121-114. From those two games to April 10, teams will fight to win their respective conferences. Check out information on both conferences as well as a top pick and underdog pick to take the East and West this NBA season so you can plan your bets against the NBA Conference Championship odds.

It’s just one game, but Milwaukee’s thorough dismantling of the Brooklyn Nets had to impress. A closer look reveals the game was about possessions.

Brooklyn shot the ball 84 times from the field. Milwaukee shot it 105. The Nets took 32 three-point shots. The Bucks took 45 three-pointers.

But that’s Milwaukee, right? The Bucks don’t have to make as high of a percentage of their shots when their volume is off the charts. More importantly, one game won’t tip the scales odds wise, which means Milwaukee is the much better play to win the title than are the Nets.

The Bucks are the top pick. Let’s forget about making the Sixers, Hawks or Celtics the underdog play.

Philadelphia doesn’t know what to do with Ben Simmons. He’s a disgruntled uber-rich young person, which means trying to explain to him that once you accept money for a job you’re expected to do the job will go over his head.

The Hawks didn’t improve enough and the Celtics, well, are the Celtics. The Heat? Yeah, they should be as solid as any team in the conference.

Nobody is talking about it, but the Miami Heat’s big three might be the most effective in the NBA this season. Jimmy Butler, Bam Adebayo, and Kyle Lowry should work together no problem because all know their roles. Expect the Heat to push for the Eastern Conference Championship.

For all of their stars, it’s apparent the Lakers’ plan this season is to lean on LeBron and Anthony Davis. That’s the problem when you fill your team with players who don’t exactly understand their roles.

The Phoenix Suns don’t have that issue. The Suns big three is made up of a pure point guard in Chris Paul, a pure two guard in Devin Booker, and a pure big man in DeAndre Ayton.

But although Ayton, Booker, and Paul will be the main reason the Suns will challenge for the Western Conference Championship, the reason to leapfrog The Valley over the Jazz, Warriors, and Lakers is because of coach Monty Williams and a deep bench that includes a soon to be star player in Cameron Johnson.

We banged our heads against the wall looking for the underdog play. The Western Conference is deeper than the East, but it’s not so deep that a team like the Clippers without Kawhi Leonard can win the title.

The Denver Nuggets will be without Jamal Murray for most of the season, which leaves us with the Dallas Mavericks. There’s quality in the starting five after Luka Doncic and Kristaps Porzingis.

Tim Hardaway Jr., especially, can light it up. The key for Dallas could be Jalen Brunson. The 25-year-old has developed into a solid player.

He, or someone else, must take the next step for the Mavs to challenge for the Western Conference title. If he or someone else does, creating a Dallas big three, the Mavericks could surprise.

Posted: Wednesday, October 20, 2021 6:08, EDT
On October 19, the National Basketball Association tipped off what promises to be another great season of hoops action. The Milwaukee Bucks dominated the Brooklyn Nets 127-104 and the Los Angeles Lakers fell to the Golden State Warriors 121-114. From those two games to April 10, teams will fight to win their respective conferences. Check out information on both conferences Read More

NBA 2021 Season Opening Week Matches to Must Bet On

Posted: Monday, October 18, 2021 6:08, EDT
The NBA turns 75 years old this season, so expect some hoopla when the new season begins on Tuesday night, October 19. Last season is going to be a tough act to follow, as it delivered a ton of surprises, with the season ending in a Milwaukee Bucks title. The Bucks will, of course, come into the season with a Read More